One of the most exciting things about attending a drinks conference in another country, apart from actually being in that country, is noticing differences in drinking cultures. Bar Convent Berlin (BCB) is one of the largest and most significant beverage conferences in Europe, lasting only two days, but efficiently including almost every aspect of the beverage world into that window of time, with brands presenting in kiosks spread throughout a massive convention center (once an East Berlin train station), along with seminars scheduled throughout the day on various stages, and evening events around the city.

Almost every beverage category is represented at BCB, including an international selection of whiskey. One would assume at a European conference, with attendees who mostly hail from the European community, the spotlight would be on Scotch and other local whiskies. However, of the 122 whiskey brands represented, more than 30 of them were American, and unsurprisingly – because you can take the whiskey out of the frontier but you can’t take the frontier spirit out of the whiskey – a few of them staked out prime convention hall territory with some of the largest, most noticeable stands in the entire joint. 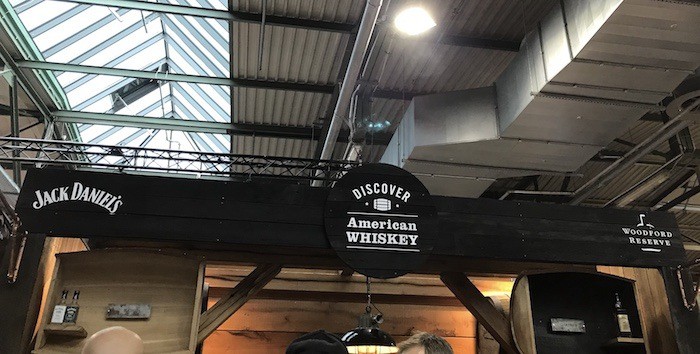 The money is, of course, in corporate whiskey. Entering the main hall, attendees were greeted almost immediately with a huge Brown-Forman whiskey and cocktails tasting bar featuring Jack Daniels and Woodford Reserve with the sign DISCOVER AMERICAN WHISKEY. Nearby, Michter’s was smart to hold camp right on the main stage, nearly un-missable, considering their presence in one of the most highly trafficked areas.

In Hall 7, where more of the most visible brands could be discovered, instead of showcasing all the whiskies in the Beam Suntory portfolio on offer at one tasting bar, Maker’s Mark and Jim Beam opted for their own private cocktail bars and presentations (alongside favorites like Auchentoshan and Yamazaki). Wild Turkey held court separately next to the Campari Negroni bar. It was a similar story throughout the main halls as colonies, if you will, of American whiskey were showcased separately from other international whiskies from a shared portfolio.

Craft whiskey entities made the trek to Berlin too. Catoctin Creek and Koval, though with smaller and less visible tasting bars, attracted good crowds, and even McCarthy’s Single Malt made an appearance. But the story wasn’t all bourbon, rye and blends. Chatting with Dave Smith, head distiller and vice president of St. George Spirits, in a side hall, he informed me that tasting Europeans on products like American single malts isn’t as tough a sell these days as one might suspect. As the international bar community and consumers are more informed about what they’re drinking, there is a natural intrigue about these types of whiskies, and though they are produced quite differently than their Scotch or even Japanese counterparts, people are digging them.

Said Dave Smith, “I found the response to be overwhelmingly positive. Obviously, American drinking culture enjoys a significant influence on international drinking, but we forget that a great deal of our spirits culture was birthed in Europe. This was sort of a homecoming for us at St. George as our founder Jörg Rupf showcased our American-made spirits in his home country that inspired him to carry artisanal distillation to California 35 years ago… For being little guys at such a massive show, I believe that we genuinely surprised and delighted those that came by our booth (many of which returned more than a few times and always with more friends).”

Of course, the story isn’t all American whiskey. Attending BCB, it was clear the non age statement and independent bottling trend is on the rise. One of the few distilleries to present a lineup of age statements was Glengoyne, however, the big push was for their NAS Cask Strength, especially in cocktails.

The real story about BCB is that as big brands displayed the flash, smaller brands have a real presence, and the craft whiskey scene is clearly growing and innovating. It’s always fun to taste what That Boutique-y Whisky Company is up to with their indie bottlings, especially from shuttered distilleries. England’s Cotswolds Distillery, previously known for their gin, was pouring their brand new single malt whisky, which goes through a kind of reverse maturation – first in red wine cask and then in ex-bourbon (and it’s creamy and delicious).

Islay Boys, who specialize in sourced blends, poured their new Barrel Legs single malt release, adding to what is emerging as the new Islay craft whisky landscape. Flöki, which bills itself as Iceland’s first single malt made from local barley at Eimverk Distillery (makers of Brennevín) showed at the convention, as did Germany’s own Finch Whisky. Surprisingly, most Irish and Japanese whisky at BCB was of the big brand variety as opposed to the newer indies, including a massive Jameson whiskey and beer bar, but judging by the crowds at their respective stations, no one was mad at that.

Visiting Berlin cocktail destinations, it was also clear that bourbon and rye have a major presence. Every bar I visited had at least one cocktail on the menu that showcased American whiskey, and both large and small brands had prime real estate on the back bar. This means that not only is it a popular choice, supplies are somehow meeting demand, not to mention, import regulations.

A few years ago, when classic cocktails were the rage, bourbon and rye would have been considered essential recipe ingredients for authenticity’s sake, but much harder to obtain. Now that high end cocktail bars, of which there are dozens spread throughout the kinetic Berlin landscape, are branching out into more experimental territory, it’s interesting that these whiskeys are taking the journey with them.

Berlin is just a splash on the European whisky landscape. This raises the question as to whether American whiskey producers will be able to maintain enough juice to satisfy an increasing thirst in the international marketplace, especially with some imports that are challenging enough to find stateside. For now, at least, it’s nice to know there’s a taste of home wherever I may roam.