“I want the oldest one on your table.” That’s a common refrain heard at whiskey festivals when brands showcase their product lineup. Because the new American whiskey boom grew out of the single malt Scotch craze, many consumers believe that older means better. However, there are considerable differences when it comes to maturing American whiskey versus Scotch and other whisky categories, and the relationship between age and quality isn’t always what it seems.

For one thing, the majority of Scotch and other whiskeys not labeled as bourbon or rye are aged in previously used barrels. That means that whatever liquid was once held in that wood has now infused it, sometimes in more than one layer, depending on whether the cask was used more than once. And each time a barrel is used, it loses some of its flavoring power, just like a teabag. That means a used barrel is ideal for longer aging times, because there’s less chance of over-oaking and because it imparts a mellower, richer finish to the resulting spirit.

All bourbon and rye whiskey must be aged in new, charred oak barrels to be labeled as such, and charred, new oak casks have an immediate “direct hit” impact on whiskey stored within them. This is not new information to seasoned American whiskey drinkers. However, at a recent presentation given by Wild Turkey master distiller Eddie Russell, we also learned more about how the degree of char in the wood  is akin to adding a certain measurement of spice to food.(He distinguishes between four levels of char, from light to dark; the darkest, Char. No 4, is also known as “alligator char.”)

American whiskey drinkers love those delicious vanilla, baking, spice, and caramel flavors in their whiskey, which are created by exposing lignin, cellulose, and hemicellulose (compounds in wood) to heat, which breaks them down into their more desirable byproducts and makes those byproducts available to the whiskey. Therefore, the more the wood is charred, the more those spicy and sweet flavors will be drawn out in the finished whiskey. 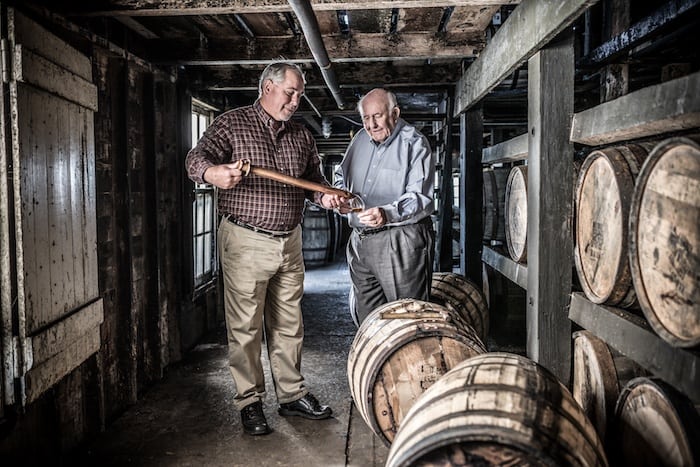 The wood also has the task of smoothing out the rough fusel alcohol in the whiskey by eliminating its more pungent qualities and converting acids to esters. This process, known as esterification, is what gives whiskey its fruity flavors and aromas. This is why younger whiskey tastes so “green” and herbal compared to more mature examples – most of the fusel alcohols have not yet been converted by the process of esterification.

However, there is too much of a good thing – yes, even when it comes to whiskey. At the Wild Turkey presentation, a range of bourbon samples at different stages of maturation were tasted. Eddie told us that his father, master distiller Jimmy Russell, likes to say one should consider whiskey like a steak – that the ideal temperature, or level of “doneness” for a premium American whiskey, should be around medium rare – 6 to 8 years. When it gets to be medium well to well done (past 12 years), the whiskey starts to flatten out.

An older barrel sample of whiskey was presented and it was noticeable right away that the majority of the mid palate (the fruits, the subtle spices, chocolatiness, leather, etc.) was dead on the taste buds – the char and sweetness had dominated all the other layers. Ever tasted a “knackered” whiskey that overslept in the barrel? There can be a very unpleasant mothball-esque mustiness on the nose, and the finish quickly puffs out when it should be lingering on the palate.

So why is age still a thing with consumers? Well, of course, every whiskey barrel is different. Taste samples from barrels the exact same age from the exact same warehouse, even from the exact same location of the warehouse, and there could be a wide range of differences caused by factors such as how much aeration occurred in the wood and what percentage of the whiskey evaporated to the angel’s share, not to mention subtle differences in temperature and humidity across even a few inches on a rickhouse floor.

Some much older whiskeys have been lucky enough to withstand the elements and emerge highly delicious (such as the older age statement Buffalo Trace brand lineup – the Antique Collections, Weller, Colonel E.H. Taylor – or Heaven Hill’s Elijah Craig 18 or 23, or Michter’s 20 Year, etc.). Yet other older age statement whiskeys have clearly gone disappointingly musty and flat when left too long in that “special” warehouse they were “discovered” in. Ahem.

The good news is, these fusty old things might still be valuable. The char-smoke and sweet flavors are so concentrated, if they didn’t make it into age statement releases, they might be good for use as a blending element, along with younger whiskeys chosen for their greener, sharper qualities. This is why so many whiskey blends are built from both young and old whiskeys – there’s value in both the geezers and the whippersnappers in a whiskey rickhouse.

Bottom line: be cautious of brand stories about finding so-called “lost” barrels and deciding to bottle them up while offering them up at a price that’s more than the cost of mortgage payment. There’s probably a good reason why they were left behind in the first place.