A Day at the 144th Kentucky Derby

“Release the kraken!” I screamed, joining the chorus of a man standing a few feet to my left as I began swatting the air with a race program rolled up in my left hand, while trying not to spill the mint julep held in my right. We, my newfound brother in arms, bound by the bond of the bet, were actually cheering for McCraken, a horse running in the 5th race at Churchill Downs early in the afternoon of the 144th Kentucky Derby.

McCraken violently roared all the way from last place midway through the contest to come back and win. The victory would be my first and last for the day, as after McCraken’s magical ride my luck, and eventually my supply of cash, would run dry. The cup I was holding never did though, as the juleps and whiskey continued pouring into it with such ferocity that the steady flow nearly matched the record-breaking rains outside, with the day later going down as the rainiest in Derby history.

There’s nothing quite like the omnipresent madness of the Kentucky Derby. Super Bowls are attended by far too many corporate shills with no fan attachment or real rooting interest. While the palpable buzz and energy coursing through the crowd of an anticipated prizefight can’t be topped, the scale of such an event is dwarfed by the Derby, where even amidst the endless downpour in this 144th edition of the spectacle, over 157,000 attendees streamed through the gates. 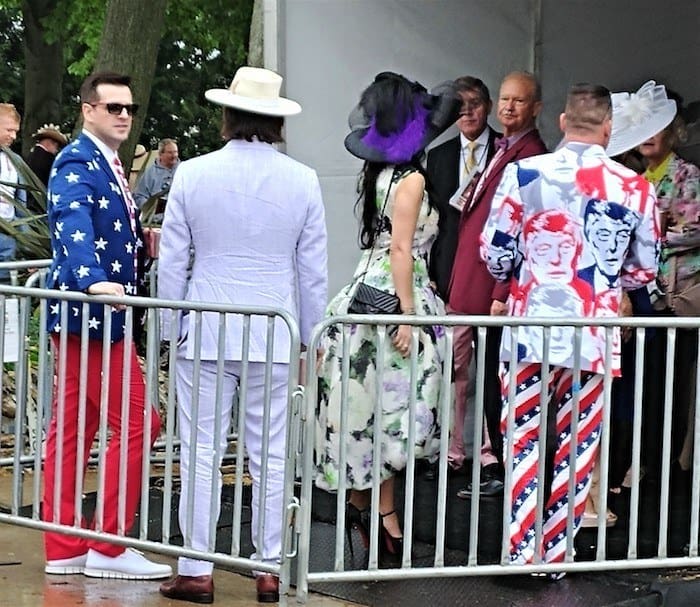 A crowd of such sheer size also offers the diversity to match. Enter through the VIP tent and a glimpse in one direction showcases southern high society seemingly untouched and unfazed by the generations, while a look in the other offers a man proudly strutting around in a red, white and blue suit emblazoned with a pattern of Donald Trump’s face. There’s the scantily clad sorority sisters and debutantes, and the goofily adorned fraternity brothers who are most often accompanying them. The true track junkies exchanging betting tips, the debauched partiers riding a high that mint juleps alone cannot provide, the families with young children in tow, the professional athletes and celebrities, the young and the old, a smorgasbord offering unmatched people watching and mingling opportunities.

There’s much drinking to be done, and it’s best to approach the endeavor with the opposite tactics of what’s done on the track–a slow and steady burn rather than a furious, hard charge. Woodford Reserve is the official presenting sponsor of the Kentucky Derby, and the entire Brown-Forman portfolio could be found scattered around the event. Woodford famously serves up $1,000 and $2,500 mint julep cups, gold and silver keepsakes given to the charitable patrons who purchase them. Master distiller Chris Morris and assistant master distiller Elizabeth McCall supervised the bonanza while glad-handing regular buyers and assorted local luminaries. Meanwhile, Old Forester actually provides the official drink of the Derby, with its ready-to-drink Mint Julep being served up approximately 120,000 times over the two days including the Kentucky Oaks and the Kentucky Derby. 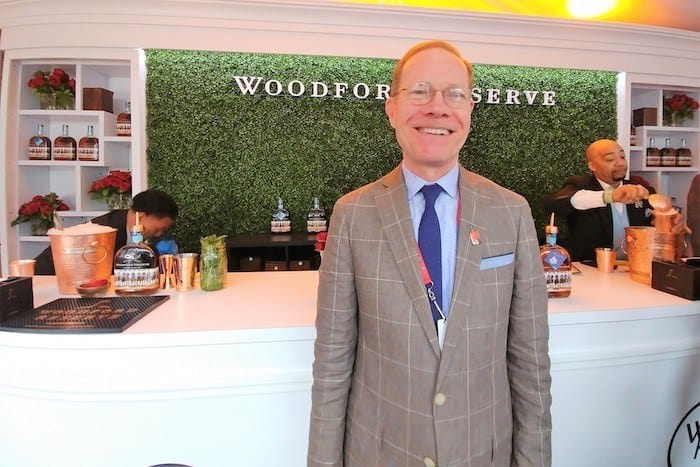 While concession stands were offering up assorted other beers and cocktails, for a true taste of something different you have to escape the main concourses and position yourself in a more exclusive setting, such as the Turf Club or suite levels. Even quality club-level tickets don’t provide you access to either area, in which case, you’ll be happy to learn where you could go with a confident flash of a backwards-facing badge that neither proves nor disproves one’s allotted social status. Dress for the suite access you want, not for the seats you have, as they say.

Inside, a world of superior drinking options were available, with stocked whiskey bars offering the full assortment of Woodford Reserve Master’s Collection releases, and a spectrum of off-brand whiskeys for purchase, from Michter’s and Four Roses to Pappy Van Winkle. And lo and behold, cocktails that weren’t juleps, including creations from mixologist Charles Joly, who was on-hand dealing with the masses and churning out signature drinks. His list was topped by the Double Smoked Old Fashioned, with Woodford backed by smoked coffee syrup and presented in a bourbon barrel smoke-filled glass tabletop box.

It’s not as if the misbehaved couldn’t be found in the upper reaches of Churchill Downs though. Far from it. Here, such deviants were only more fully emboldened to do as they please. The festival atmosphere, the horses, the money, and the booze all worked together to create a uniquely intoxicating environment, injecting certain elements of the crowd with a particular type of frenzied betting bloodlust.

Groups could be observed offering prop bets among each other on any number of offerings. Who could chug this glass of whiskey in how little time? Could anybody chug an entire magnum of Champagne? How many mint juleps could be consumed by one person in five minutes?

As a word of caution, such antics shouldn’t be haphazardly pursued. One man was observed projectile vomiting in his seats just a moment before the actual Kentucky Derby began. We’ll never know if he was the winner or loser of such propositions, or whether it was the simple case that a day which began for many 12 hours before the main event caught up to the man.

Soon his disheveled, detritus-coated navy blue blazer lay on the wet ground discarded among the trash, the torn up betting slips, and the tarnished racing programs which had already been laid down to cover up the unwanted gift he had left his neighbors. This, though, at least offered a wonderful teaching moment, as I seized the chance to eloquently expound upon the dangers of over-drinking to a trio of baby-faced collegiates and their alarmed mother, who seemed genuinely, if a bit bemusedly, appreciative of my efforts.

Suffice it to say that the Derby is far from a homogeneous swath of seersucker, and that at the start of the proceedings each person embarked on his or her own unique journey, whether it was an inside track of civilly enjoying the day or an outside line of surviving the ordeal. For myself, nothing topped my sole winning bet, the moment McCraken surged to the lead and won me a scant few extra dollars to add to the pile I would nevertheless go onto lose.

I found willing tipsters along the way—everyone has a tip to share at the Derby—though none paid off. A man with a bowler hat held a cocktail napkin with a series of numbers scrawled upon it, which I took to be the type of ironclad inside information one only dreams about—the 9 in the 9, and the 8 in the 10 (the 8th horse in the 10th race). Neither horse would win. 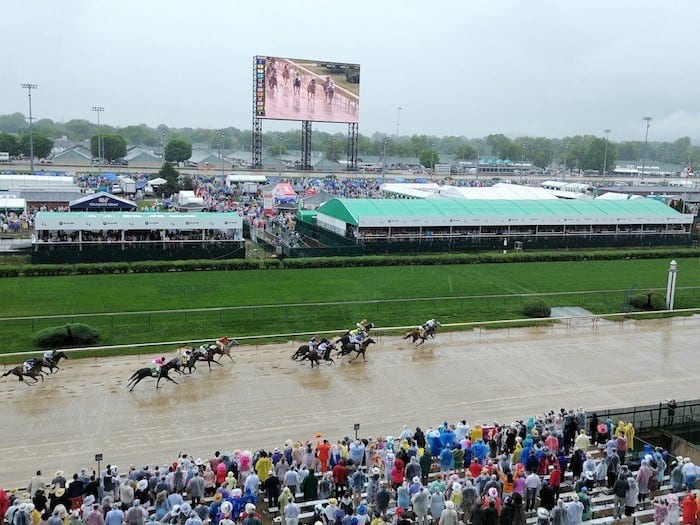 Rain at this year’s derby turned the track into mud. Photo by Jake Emen.

On another betting line, I was behind a woman perhaps 80 years old, dressed in cream colored lace with the hat to match and holding a handful of $20’s decorated with a string of handwritten numbers. This looked liked another golden opportunity to get back on the winning side of this whole sordid horse racing affair. The woman, most assuredly the matriarch of a longstanding southern family with a recognizable last name, did not divulge her secrets though, only saying, “Honey, I know what I’m doing and I don’t want to keep the teller waiting.”

Yes ma’am. I placed my losing bet, refilled my julep, and rolled up my program as I once more sidled into a suite I probably shouldn’t have been able to access.