Whiskey. So good straight, maybe with a bit of ice, or a splash of branch water. Stuff of complexity and depth. But sometimes, even if you’re a purist, you want your whiskey to dance with a partner, to blend complementary notes with a distilled colleague or two. In short, you want a cocktail—something lively and bracing, with whiskey as the kicker.

Sure, you could hit the neighborhood bar, or go to your cabinet, get out all the fixings, and smoosh something together. But if you’re indifferent to doing one of those, you have another option: barreled cocktails. A number of distilleries are selling pre-aged cocktails, expertly mixed and oak-matured to a mellow depth.

Made with premium spirits, barreled cocktails are so simple: keep them cold, have your cocktail glasses chilled, add a twist of lemon, maybe a nice cocktail cherry, and pour. Some folks shake ’em up or stir them again, but all the approaches are much easier than building them by scratch at your bar. And as you’ll find, all that wallowing in an oak bathtub gives them a gravity not available when they’re made fresh from the bar.

Distilleries Bring Them by the Barrel 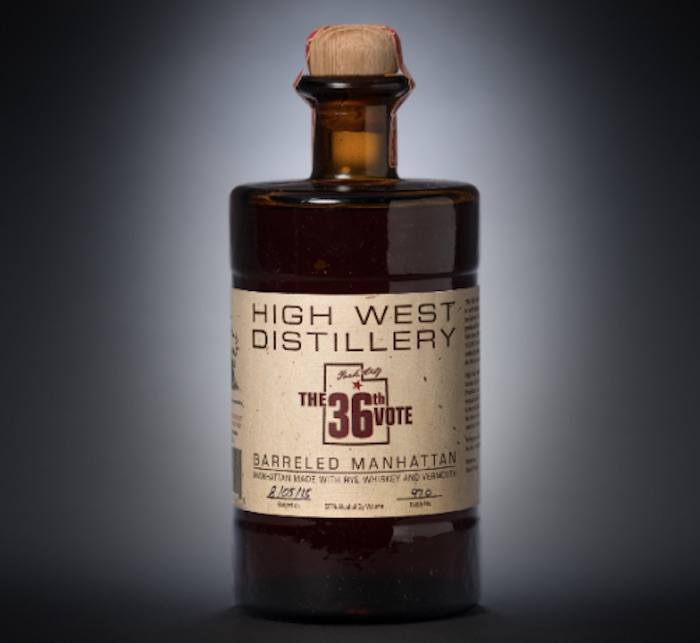 Besides the distilleries and retailers selling pre-mixed and aged cocktails, many sell their fixings, such as the barrels themselves, as well as bitters or other secondary ingredients.

High West Distillery has sold their 36th Vote Barreled Manhattans and The Barreled Boulevardier for some time now. They age the cocktails for several months in 53-gallon barrels that used to hold rye. Justin Lew, VP of Marketing at High West told me via email that they do taste the spirits while they age, but that since they’ve been doing this for a while, they have a good sense of the outcome.

“We think barreled cocktails are a fun way to innovate within the whiskey world. They showcase our blending ability—plus they are really delicious,” says Lew. “Freshly made cocktails are fantastic, and our barrel-aged cocktails are not a replacement. We think they provide a deliciously different take on the cocktail. Barrel aging mellows the mix, adds layers of flavors, and softens the edges of a cocktail,” he says.

Jefferson’s sells a barreled “Perfect” (using dry and sweet vermouth) Manhattan, adding previously barreled Spiced Black Cherry bitters, and aging that brew in oak for several months. I do like a Perfect Manhattan, though I gravitate to the standard, sweeter side.

Ohio’s Watershed Distillery sells a pre-mixed Old Fashioned (which is sweetened/spiced by “the best Ohio cherry juice”). They make no mention of aging the cocktails in barrels, which is the case with a couple of other distilleries who simply bottle and sell. You can now see pre-mixed cocktails (some barreled, some not) in hipper bars these days, often tempered with house-made fruit infusions and bitters.

Union Horse sells barrels, as well as barreling instructions and recipes (and of course, whiskey). They suggest four to six weeks in the barrel, depending on how much oak/tannin/vanillin flavor you seek in a whiskey drink. The joy of you being the barrelmaster is, you can try some sample tastes a week or so apart to see how your blend is moving along.

Though classic cocktails like the Manhattan, Boulevardier and Old Fashioned are commonly available as a barreled spirit, you’ll also find some outliers in the bunch, like the Peanut Butter and Jam Old Fashioned available from the Master of Malt, along with a number of other pre-mixed peculiarities. There’s a mad scientist in every bar, I suppose.

Do Try This at Home

Speaking of mad scientists, I admit to the label myself. A few years ago, I bought my girlfriend Alice a three-liter, medium-char barrel from Tuthilltown Spirits, who also sell—besides great whiskey—various bitters, mixers and cherries. We’ve barreled cocktails four times now. The results have always been good, though I did think a batch of Manhattans that I left in there for two months had too much oak.

Right now, we’re two weeks into a batch of Boulevardiers, and from tasting them a few days ago, they are coming along nicely. Since I often go a few months in between a barreling, I have to soak the barrel overnight in a tub to make the staves swell again to a good seal. I also rinse the barrel, which will produce water darkened with loose char and wood bits.

A lot of recipes for Boulevardiers use a 1/1/1 mix of the whiskey, sweet vermouth and a “big” bitter, like Campari, but I usually go for a 1.5 on the whiskey side, because, whiskey is wonderful, after all.

My mix this time is on the peculiar side, for a couple of factors: I usually make Boulevardiers (like High West does) with Tempus Fugit’s Gran Classico, a great amaro-like bitter, but I used Campari (about 700 ml) this time. I’m a Dolin (or Antica) fan for sweet vermouth, but I used the Martini and Rossi (about 700 ml) I had on hand. Because I like the complexities good aromatics bring to a Boulevardier, and I don’t quite get those with Campari, I put in some dashes of Peychaud’s and Angostura bitters as well.

There was a “clean out the cabinet” at work here: for the whiskey, I used about 300 ml of moonshine American Whiskey (80 proof) made by an accomplished moonshiner we know, as well as 600 ml of Jack Daniel’s Gentleman Jack. The moonshine had only been in the barrel a couple of months, so it lacked balance, and the Jack, though well-mannered, has never had the bite I like in whiskey.

My mix was too aromatic for me, but I knew the cure: More whiskey! I put in about 200 ml of Bulleit Rye (90 proof) and that brought up the band. But after a week in the barrel, I still felt the batch needed a bit more boom: I added around 200 ml of Larceny bourbon (92 proof). The last tasting: voila!

I know it sounds like I might pour in some paint thinner next, but that’s not the case. I usually stick closer to original recipes for my cocktails, if whiskey-heavy, but this one was a little eccentric. However, I know with another week or two in the barrel, it will be well dressed for its debut. Cheers!

22
Shares
302
Views
Share on FacebookShare on TwitterGet Our Newsletter
Cheers to the Dads! Personalize a bottle of his favorite whiskey to create a modern gift for the modern man. Use code: FATHERSDAY20 for $20 off your next order of $100 or more at ReserveBar