What Does The Future of French Whisky Look Like?

Intrigued as I have been for a few years now by the rising quality of French whisky, I decided recently to contact one of the many young entrepreneurs in the Picardie area. Etienne d’Hautefeuille (36) was more than willing to give me a tour around his Distillerie d’Hautefeuille. Walking on the vast inner court of the ferme du château east of Amiens in the hamlet of Beaucourt-en-Santerre I am first of all checked out by the farmer’s dog.

“This is the château. I was born here. Our family has lived here for ten generations, about 270 years.” says Etienne d’Hautefeuille as we walk to the front garden “The main house used to have a u-shape, but the left wing was bombed during the First World War.” We stand on historic ground, because this is where Allied forces dealt a massive blow to the German army in the Battle of Amiens in August, 1918. At the inner court Etienne points out the pigeonnier that dates back to 1660, the only farm building that survived The Great War and whose roof is to be restored the coming days. To my right is one of the former stables that was renovated and turned into the accueil, the visitor’s centre. At the short end of the inner court are located the distilling room and the newly built barrel storage facility.

Etienne explains how things started. “I used to work in Paris and left Paris in 2015 to work on my parents’ farm. My neighbour was working for La Maison du Whisky and he triggered my first interest in whisky. That was the time that the idea of a starting a distillery took shape. On their ferme du château, my parents have always farmed grain and there’s enough space on the premises, so everything we needed was at hand. The idea was to create a whisky from field-to-glass. We grow Sebastian, Laureate and RGT Planet, all 2-row barleys.” Today, it’s mainly the Sebastian barley that is the fingerprint of d’Hautefeuille’s Loup Hardi terroir. It was quite an effort to raise the money for the distilling equipment and the casks, but eventually they managed. 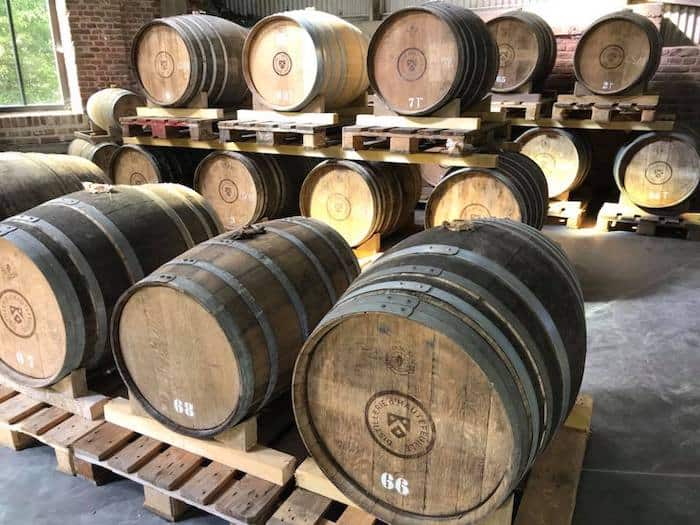 Our young entrepreneur continues his tour with great passion. “Our first official distillation on these premises was in March 2017. Now we have to wait one year till March or June 2020.” The bottle filling machine at the centre of the visitors’ room is small and can handle four bottles at the time, but it will do in due course. Right now two kinds of gin are produced: the Explorateur (seabuckthorn & Yuzu) and the Audacieux (Elderflower). The labels look fresh and attractive. Etienne managed to shelve them at quite some liquor stores in Picardie, especially the ones in the tourist resorts at the coast. While he is still working on the promotion and even export, Etienne is looking for a party that can help him out.

D’Hautefeuille’s whisky will be called Loup Hardi (pronounce: louwardi): courageous wolf. Legend has it that one of Etienne’s ancestors had roamed the larger part of Europe as a brave pilgrim and was therefore called Loup Hardi. The family coat of arms depicts three coquilles (scallop shells), the symbols of the Camion de Santiago, a network of pilgrim routes. I reckon that Etienne’s brave pilgrim forefather is still the spiritual leader of the distillery.

We walk into the distilling room and meet Etienne’s father who’s still helping out both at the farm and the distillery. And we meet Olivier, one of the employees, who’s hosing the distillery floor. At the long end of the barn  an elevated concrete walking area is created for visitors to watch the distilling process. Scattered across the huge barn are a variety of neatly numbered casks. Two huge sacks of malted Sebastian barley, harvested on Hangard field during the summer of 2017, are waiting to be processed. They’re just back from Castle Malting SA in Beloeil, Belgium. There’s also a mash tun in one corner, brewing twice a week with two tons of malted barley and producing 90 liters of pure alcohol per day, and next to that three huge stainless steel fermenters which were bought from the famous French winemaker Moët & Chandon. Fermentation temperature is kept between 25 and 30 degrees Celcius. Prominently on a stage-like construction is the wonderful Stupfler 800-liter copper spirit still combination.

“We have 120 barrels stored in a series of different casks,” says our master distiller. “First the French Troncais virgin oak casks. Then the bourbon ex-rum casks from French distillery Habitation Saint-Etienne (HSE) in Martinique. And last but not least the French Condrieu white wine casks from the Rhone area.” An order of Andalusian PX sherry casks is scheduled for this summer. Etienne admits that good advisors are crucial to help out with cask management. “My associate Gaël Mordac has good knowledge of French wine estates and useful contacts with producers. He’s been my partner in this enterprise from the beginning and runs the 160 year old wine house H. Martigny & Fils in Amiens. The virgin oak and ex-rum casks are easily bought; these casks are stable and have no risk of contamination, whereas the wine casks need to be fresh.”

The first two barrels at the entrance are cognac barrels and have just been filled last week. Etienne smiles while removing the bung. A confident smile but also one of genuine anticipation. He puts his whisky thief deep into the barrel, draws it out slowly, fills the glasses and hands me the glass of about 60% abv. I know that a one week old maturation is by far not judgeable to its true merits. I indeed smell alcohol together with a soft hint of cereals. But all the veins in my body tell me that these two barrels are promising.

We move over to the other end of the barn where quite a few barrels are stacked on top of each other waiting to be moved to the newly built storage facility. These are the 200 liter ex-rum bourbon barrels from the Distillery Habitation Saint-Etienne (HSE). HSE imports them directly from the US because there is no tonnellerie (cooperage) on the island. Again, I trust my nose and it tells me that this is really wonderful stuff. Is this an eight months’ maturation I taste? This new-make spirit started off in a Troncais virgin oak barrel for one month and was then transferred in the HSE rum barrels. It’s mellow with distant hints of rum. It’s soft on my palate, young and it lingers away pleasantly. How come this underaged whisky from June 2018 does already have this awesome quality? Etienne’s smile is too big for his face.

Our host is pointing towards another quartet of casks with his whisky thief: “These are the very first casks that were filled at end of 2015 and the beginning of 2016. It was made with a ton of barley in a trial run and will be ready in week from now. I guess we will mark them as limited editions,” Etienne says while handing me a dram. ”These are white Condrieu wine casks, a very good wine from the Rhone area. The whisky is 48% abv and we will be cut down to 46% abv.” The color I see is brownish. The alcohol is prominently there as I smell the whisky. This is great; I taste a young whisky of three years old, slightly peated and am inclined to say that this whisky deserves the best. This limited edition will definitely get even more stunning if Etienne can find the courage to leave it alone for a few more years.

But, then again, I understand Etienne’s eagerness to bottle. There’s always an economic urge that has to be addressed. But these Loup Hardi expressions certainly are promising Gallic whiskies. As I drive back to the coast I enjoy the Picardian landscape and think about the bright future that lies ahead for many French whisky makers like Etienne. Soon, existing names like Warenghem, Glann ar Mor and Brenne will be joined by a new name: d’Hautefeuille.