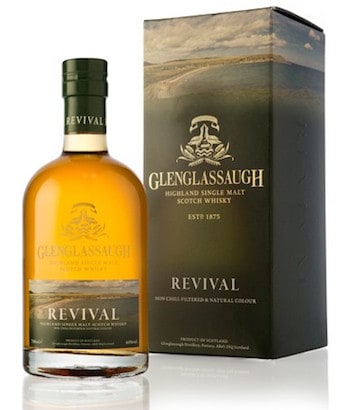 The Glenglassaugh Distillery in Portsoy, Scotland, fell victim to the dark ages of Scotch whisky that were the mid-1980s. The distillery was originally established in 1875, but was shuttered in 1986 as a result of the global downturn in popularity for the spirit.

Luckily, markets around the world have since come to their senses and returned to embrace all manner of whisky. Following the 2008 company purchase by the Scaent Group, release of pre-1986 stores rekindled interest in the label. The distillery was refurbished and began production of new batches of single malt in 2009. The year 2013 saw the BenRiach Distillery Company taking ownership of the property and label.

After years of uncertainty, Scotch is once again being distilled, matured, and bottled in the small town to the northwest of Aberdeen. Thusly, the name of this first official release of new whisky from the re-built distillery is most appropriate – Glenglassaugh Revival.

Attention to detail in the maturation process is usually one of the more interesting aspects of any respectable spirit. Glenglassaugh Revival is no exception. This Highland single malt first matures in a variety of casks that were formerly home to red wines and bourbons. Following this initial aging, the Scotch is vatted before maturing an additional six months in Oloroso sherry casks. The process yields a result that is complex enough to be amusing without crossing into the realm of the overly complicated. The label provides no age statement.

A good comeback story is heartwarming in and of itself, but it can become too easy to let nostalgia interfere with the experience of an individual dram. Had the modern-day Scotch bearing the brand of Glenglassaugh been sub-par, the name Revival would have been a cruel irony. Happily, this is not the case. The resulting single malt is a quite enjoyable scotch worthy of the effort that went into the label being brought back to life.

FINAL SCORE: 87/100 [SHOP FOR A BOTTLE OF GLENGLASSAUGH REVIVAL]

323
Shares
1.8k
Views
Share on FacebookShare on TwitterGet Our Newsletter
Cheers to the Dads! Personalize a bottle of his favorite whiskey to create a modern gift for the modern man. Use code: FATHERSDAY20 for $20 off your next order of $100 or more at ReserveBar