Yet another scotch distillery is rolling out a rum-finished expression; Highland distillery Tomatin’s 2009 Caribbean Rum Finish recently debuted, along with a 2006 Amontillado Sherry Finish.

The rum-finished expression was aged for nine years in “traditional scotch whisky oak casks” before a year-long finish in first-fill Caribbean rum barrels, according to a prepared statement from Tomatin. According to the distillers, the rum barrels imparted “flavours of soft tropical fruit, mocha and salted caramel, rounded off with a sweet, lingering finish.” It’s Tomatin’s second take on a rum-aged expression, after a limited run was released in 2016. The 7,200-bottle run is non-chill-filtered and bottled at 46% ABV.

The sherry-finished whisky also started as a nine-year-old single malt; it was then finished for three years in first-fill Amontillado sherry barrels. With this expression, the distillery calls out “rich flavours of dark chocolate, dried fruits, espresso and a hint of nut.” It is also non-chill-filtered with an ABV of 46%, and is limited to 5,400 bottles. 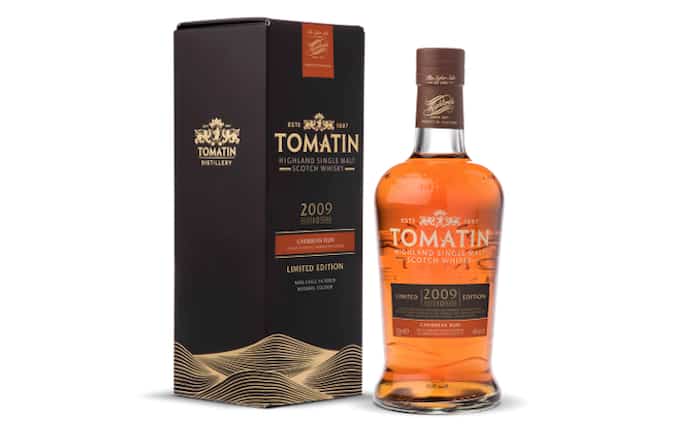 Tomatin, which dates back to 1897, is said to once have been the world’s largest distillery, producing 12 million liters of spirits a year. Its heyday was also the age of blended scotch, and over the last decade, the distillery has shifted its focus to single malts with the rest of the market.

“Our dedication to the continuous development of Tomatin Single Malt has been reflected in our growth and recent award wins,” said Graham Eunson, distillery operations director. “We are constantly striving to produce exceptional expressions that appeal to our existing customers and a wider audience. The array of tropical notes, sweet mixed spices and rich sherry infusions will hopefully entice a range of enthusiasts to sample the new products.”

The distillery’s size may have to do with its barrel-purchasing power; the company calls out their “exceptional wood policy,” which means casks from a wide variety of “prestigious partners” are available.

Both new expressions are now on shelves worldwide; the Caribbean Rum Finish whisky has a suggested retail price of £49, or around $60, while the sherry-finished expression is priced at £60, or $74.