Dewar’s has announced a new 8-year-old, double-aged, rum-finished scotch called Caribbean Smooth, the first in what will be a new line of cask-finished whiskies from the blender. The new expression is a blend of “up to 40” individual malt and grain whiskies, all at least eight years old; the blend is then double aged, and finally finished for six months in ex-Caribbean rum barrels.

“The rum casks were sourced straight from the Caribbean and brought to our ageing [sic] warehouses in Glasgow to be filled with our flavorful 8-year-old blend,” said Brian Cox, vice president of Dewar’s Scotch Whisky North America, in a prepared statement. “The first in a series of double-aged cask finishes, DEWAR’S will continue to bring these new and exciting flavor profiles to a broader market in order to drive renewed interest in our brand, and thereby the whisky category.”

The whisky features “subtle notes of apple, caramel, and biscuity cereal that slips into dark brown sugar and tropical fruit,” according to master blender Stephanie Macleod. “Caribbean Smooth is the perfect spirit to enjoy neat or in a variety of highball recipes that pair particularly well for epicurean gatherings.” 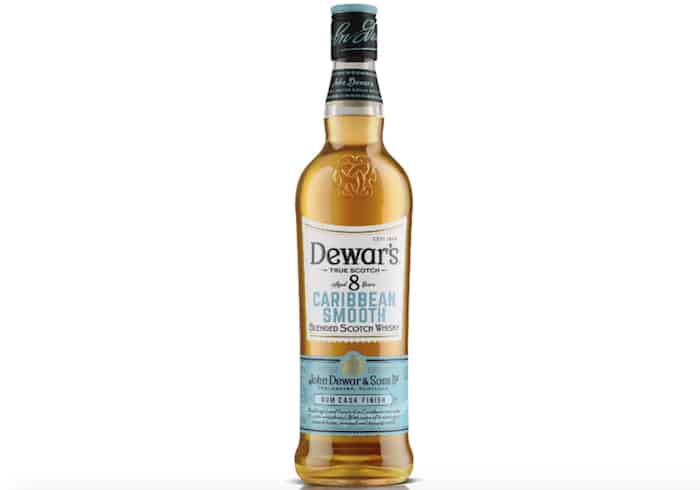 Caribbean Smooth is far from the first rum-finished whisk(e)y, but most of the existing options are higher-end single malts or craft American whiskeys. At a suggested retail price of $21.99, Dewar’s take is a more affordable version that the company recommends for a twist on traditional cocktails like the highball and the piña colada. One possible idea is below, based upon a recipe provided by the brand: