Rare Samaroli And Corti Brothers Whiskies To Be Auctioned

A collection of 60 whiskies created by iconic bottlers Silvano Samaroli and the Corti Brothers is set to be auctioned off by Whisky Auctioneer.

Set to run from June 17th to 21st, the auction will include many whiskies regarded as the finest ever bottled and the most sought-after Samaroli whiskies, signed by Silvano Samaroli himself. These include the 1967 Strathisla, 1967 and 1970 Laphroaig bottlings, a 1951 Glen Cawdor (Springbank), and the 1966 Bowmore Bouquet. The collection also includes the most extensive known lineup of rare Corti Brothers bottlings, including a very rare 1965 Clynelish and examples from distilleries such as Balmenach and Imperial distilled in the 1960s.

“This collection is a magnificent example of some of the finest and most collectible independent bottlings in existence. What’s special about Emmanuel Dron’s collection is that these bottles have unparalleled provenance. Whiskies with such an impeccable source are hard to come by,” Head of Auction Content at Whisky Auctioneer Joe Wilson said in a prepared statement. 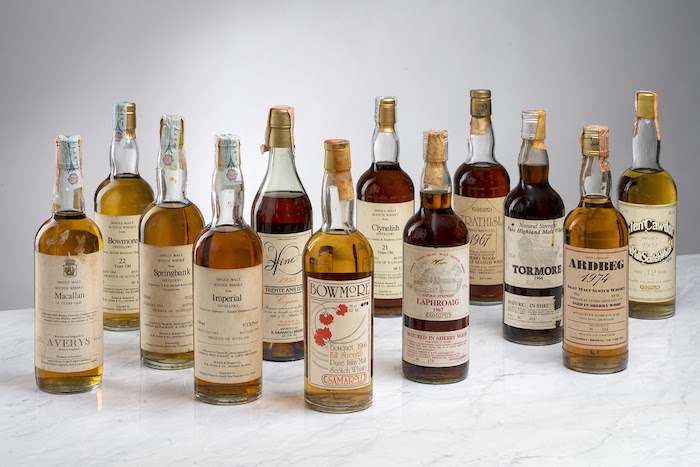 “This auction will present an opportunity for collectors worldwide to own a piece of whisky history – from unique spirit distilled in the 1960s to some of the finest bottles ever produced from distilleries including The Macallan, Bowmore, and Laphroaig. The collection also includes Emmanuel’s personal favorite – Samaroli’s 1970 Laphroaig. Emmanuel Dron is a collector passionate about sharing his love of whisky and the chance for other collectors to acquire such incredible bottles to add to their own whisky libraries.”

The collection has been curated by connoisseur and collector Emmanuel Dron, who has been piecing together bottlings for his own personal collection for 25 years and believes the bottlings from Silvano Samaroli and the Corti Brothers to be his proudest achievement.

“Over the last 10 years at the Auld Alliance we’ve seen a growing demand from connoisseurs in Asia and beyond to try many of these whiskies, which are widely considered amongst the finest in the world,” Dron said. “Now is the chance for collectors to acquire some of our rarest treasures.”

Shares
321
Views
Share on FacebookShare on TwitterGet Our Newsletter
Cheers to the Dads! Personalize a bottle of his favorite whiskey to create a modern gift for the modern man. Use code: FATHERSDAY20 for $20 off your next order of $100 or more at ReserveBar