Morrison Scotch Whisky Distillers recently launched its new portfolio of brands, featuring unique and exceptional casks from distilleries across Scotland. Formerly Morrison and Mackay, it’s now under the sole ownership of Brian and Jamie Morrison, and they have taken the opportunity to refine their line up.

The Morrison family can trace their involvement in the whisky business for more than five generations. This includes Brian’s grandfather, William Walker, a pre-eminent whisky broker of his era and was succeeded by Brian’s father, Stanley P. Morrison.

Stanley cemented the family’s roots in the industry when he purchased Islay’s oldest distillery, Bowmore, which Brian would later become managing director of before its sale to Suntory. In their new venture, the team says, the Morrison family are “committed to continuing to impart the knowledge that has been passed down to them from generations of whisky makers.” 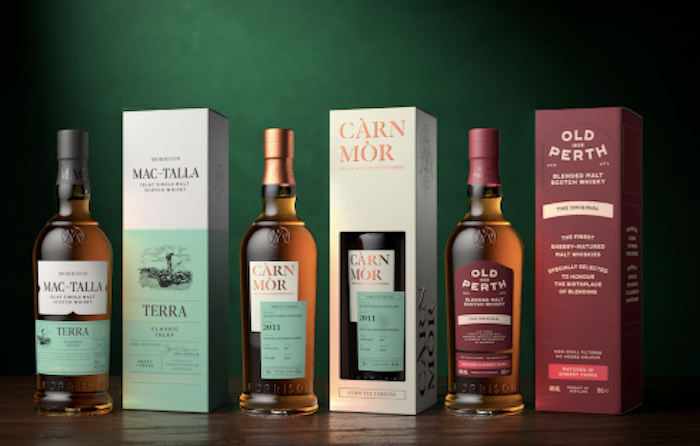 What follows below are the new whisky ranges in The Morrison Distillers portfolio.

Jamie Morrison, chairman of Morrison Scotch Whisky Distillers, said in a prepared statement, “As one of Scotland’s oldest whisky families, we can trace our involvement in the whisky business back five generations where we have held almost every role possible in the industry, including licensed grocers, brokers, blenders, bottlers and distillers.”

He said that in the coming years, Morrison will release Aberargie Single Malt Scotch Whisky, distilled in the family’s purpose-built facility in Aberargie, just outside Perth, where its release will mark the return to distilling after nearly 25 years for Jamie and his father.

Right now, the brand’s next launch is from their Mac-Talla range. Strata is a 15-year-old Islay Single Malt Scotch Whisky which features a velvety texture with earthy peat and winter spices, making it rich and warming with a smoky finish, according to official tasting notes. Mac-Talla is a range of Single Malt Scotch Whiskies from the Scottish island of Islay. Mac-Talla, meaning “echo” in Scottish Gaelic, boasts a variety of strength and maturation style including one age statement. Each expression is non-chill filtered with no color added.

The Scottish city of Perth, meanwhile, was historically home to many whisky companies. Known for whisky blending, many great malts hailed from the city. Yet, as those companies came and went,  Perth became a forgotten whisky city. Morrison’s Old Perth is a range of Blended Malt Scotch Whisky which looks to restore tradition by blending in Perth and exclusively using sherry matured malt from a selection of Scotland’s finest distilleries, located in the Glenlivet region of Speyside.

Rounding things out, the Càrn Mòr range is a selection of whiskies from single or limited casks, each with their own individual character and story. Càrn Mòr is able to release unadulterated expressions from these distilleries using traditional methods, meaning it’s as close to drinking straight from the cask as possible.