One of the more fascinating things about running a whiskey website like ours is tracking  the evolution of young distilleries, wherever they might be in the world. One of the very first ones we wrote about back in early 2014 was the Cotswolds Distillery out of England. At that time they had begun taking pre-orders for a single malt that would be released some years later. That is now, apparently, as we are right on the cusp of the release of their first expression.

The Cotswolds Single Malt Whisky (Inaugural Release), according to those behind it, is blended from select ex-bourbon and red wine casks which were filled from the distillery’s initial 2014 distilling runs. These initial distillations made use of 100% organic Cotswolds barley sourced from a farm less than 20 miles away, and were floor-malted by someone else before being milled, mashed, fermented and distilled on-site. 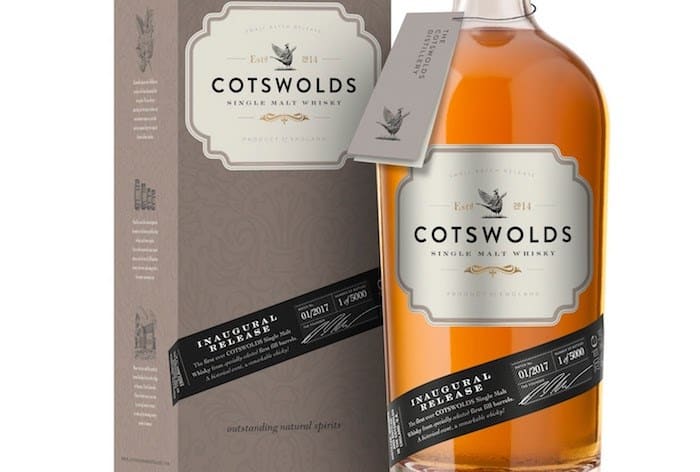 This whisky, now bottled at 46% ABV, is limited in nature, with just 4,000 bottles being made available. We have limited official tasting notes for it below – when it releases price point wise expect to pay at least £45, or about $60 USD, for it. We tasted a sampler kit of not quite three year old bottlings last year. Our takeaway at the time was that we sensed good things might be coming from this distillery.

“Our Single Malt is the culmination of years of hard work, combining over five decades of ‘grain to glass’ production knowledge from internationally-renowned experts with the region’s best-in-class ingredients,” said Daniel Szor, Founder of The Cotswolds Distillery, in a prepared statement. “We’ve managed to produce something truly remarkable, and we couldn’t be prouder of what we’ve achieved.”

On the nose, honey and butterscotch, layered with light fruits (peaches, apricots) and a hint of marzipan. The palate is rich with malt, oils and dark sugar. Spice and caramelised bitter orange lead into a long, resinous finish with dark red fruits and a hint of treacle.