Potentially three, if you include Sortilege, a liqueur made by dosing rye and corn-based Canadian whisky with maple syrup. Whisky-based maple liqueurs are proudly Québécois, with recipes dating back to the 1700s. That said, you’re likely not reading this to explore the wonders of maple syrup-flavored whisky.

So onto the good stuff. I’ll preface with the fact that whisky has been made in Montreal since 1786, with earlier unconfirmed bottles dating back fifty years prior. Matt Strickland once said that Quebec is “pastoral and pristine, reminding me of the Scottish highlands with a Quebecois veneer.”

That said, you could say two bottles define Quebec’s whisky scene. The first is the terroir-driven, single malts from Maison Sivo. Over in the Southern area of Montérégie, retired telecoms exec Janos Sivo crafts Quebec-leaning single malts and rye with a distinct Quebec accent.

Technically, the first single malt he turned out wasn’t a single malt. The Quebec liquor system is run by a government monopoly, requiring distillers to meet strict standards—his was aged for nine months, not the requisite three years. So he made a single malt…..ish: single malt in character and technique, but not by name. In rebuttal, Sivo dubbed it  “L’Essence du Single-Malt,” made with Quebec-grown barley and aged in Cornish oak. 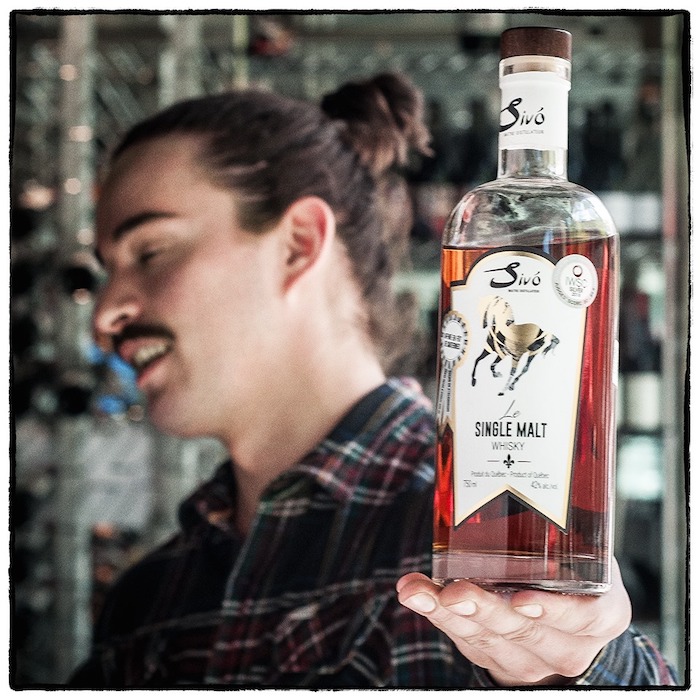 A few years down the line and he has enough juice aging that he’s able to turn out real single malts.

Everything is made with Quebec malted barley and rye, with Simos applying peat, smoke, and crystal malt to the grains. Water is pulled from the foothills of the Adirondacks and yeast is entirely pure Champagne. He gets experimental with barrel finishing, using primarily Sauternes barrels for single malts, Port barrels for rye, and Quebec ice cider and IPA beer barrels for blending.

All are run through an aroma still—a larger column still typically used for more aromatic spirits (Sivo comes from a long line of brandy distillers).

His government-approved single malts involve aging whisky made from malted barley and letting it sleep. It’s sharp, nutty, and full of umami, with a smooth char coming through on the end. It’s a little young but has a fascinating, spicy finish—if you can get your hands on a bottle. Single malt aside, there’s also rye, young in age but floral, with strong cereal notes and a balanced, present spice (presumably thanks to the low-rye mash bill).

Sivo is also making Shaman, an herbal liqueur that channels the psychoactive properties of absinthe and chartreuse. Fun!

The second defining bottle of Quebec whisky is Gibson’s Finest 18. Gibson’s—isn’t that American? By birth, the rye brand hails from Pennsylvania but via a long history scattered with bankruptcy, war, and prohibition,

Originally, Gibson was an American producer, not a maker of Canadian rye. John Gibson was a Pennsylvania man, who founded the distillery in the 1830s. The distillery thrived until prohibition had other plans, and the physical distillery was demolished. Gibson’s was purchased by Schenley Industries, who uprooted the brand to their Valleyfield distillery.

Said Valleyfield distillery also has a convoluted history. It began its life in 1911 when Edouard Hebert converted a former biscuitry into a brewery. It lasted until 1938 when production stopped. It was tossed from brewer to brewer until it was purchased by Quebec Distillers Company in 1938. Through the world war, it was used to ferment potatoes and grains into alcohol for military use, before it was purchased again in 1945 and given a new life as a whisky distillery, eventually selling 1 million barrels of spirit from Quebec-grown corn and grains.

Now, one of the benchmark bottles the distillery turns out is Gibson’s. Most notably, the 18-year-old (it has several different names so keep an eye out for the age statement). It’s made by blending various finished expressions, generally higher-proof corn whisky and a lower-proof rye. Caramel, oak, plum, nuttiness, and the sweetness from the bourbon barrels really pushes through—it’s a lovely swap out from high-rye that dominates Canada. Gibson’s has moved on and is now bottled in Ontario, though a few older age statements are worth your time in Quebec.

Instead? Look to McAulsen for barley-based single malts, or Rosemont’s Montreal-made, 18-year-old corn-wheat-barley-blend whisky that boasts big spice. On the weirder side of things, Artist In Residence Distillerie inc. is releasing unaged white ryes (ideal for cocktails) until their barrels are matured.

Read More Whiskey News
Column: When It Comes To Whiskey, My Opinions Can Be ‘High Proof’

Outside of these major players, Quebec is home to some fairly decent drams. Sazerac has set up a stronghold in downtown Montreal to produce Caribou Crossing, Silk Tassel, and High River. Paul Cirka is making intriguing ryes out of downtown Montreal, giving the spirit a cosmopolitan edge. Distillerie Cote des Saints produces truly grain-to-glass drams just out of the city.

Maple syrup whisky? Who needs it.