My career has steadily been pushing me and my family farther north, and I do mean way north. For a guy who was born and raised in the south this is indeed a strange and yankee-fied turn of events. I started distilling in Tennessee many years ago and it felt like home. It’s a place of vibrant green farmland trod on by boots that’ll join in on some line dancing come the weekend. And it’s hot. Summers had us stewing in humidity soggier than the swimming pools we used to escape it. Eventually I moved up to Washington DC which lowered the temperature slightly but still kept the swampiness (in more ways than one, but I digress).

A few months ago I took the cultural and passport-required leap and moved my family to join our poutine-loving northerly neighbors in Quebec. I’d been hired to run a new farm distillery outside of Montreal called Distillerie Cote des Saints. During the interview process I was flown up to take a look at the shiny new plant replete with floor maltings and peat smoker beneath the distillery proper. All of it located just mere meters away from 30 acres of planted barley.

It was pastoral and pristine, reminding me of the Scottish highlands with a Quebecois veneer. Distiller friends of mine and I all agreed: it’s kind of the dream gig. The one we all talk about doing one day if we have the money; how we’d be able to control virtually every step of the process and subsequently every ounce of flavor production in our whiskies. This job was too good to pass up. 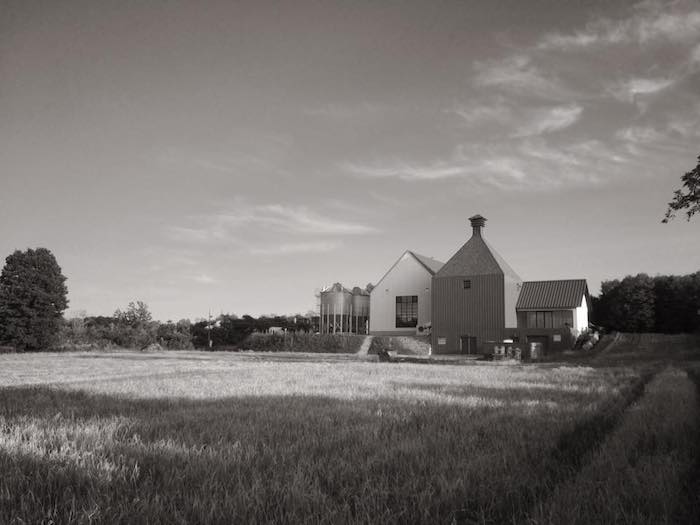 Farm distilleries have been popping up in increasing numbers over the past twenty years on American shores and beyond. Daft Mill and Arbikie are two important and worthy entrants to the category located in Scotland. Cedar Ridge Distillery in Iowa grows the corn for their bourbon and Myer Farm Distillers in New York grows much of the grain for their own products. And let’s not forget rye-centric Whistle Pig in Vermont. We’re all part of the burgeoning “field to flask” movement.

It’s an easy bit of marketing pic and copy with the distillery firmly planted among the amber grain fields on a beautiful sun-soaked day. However, despite the romance, farm distilleries have a lot of challenges. Not only do we plant, grow, and harvest a crop, but we have to have facilities to turn that crop into something usable. Barley doesn’t come ready to mash right out of the field. It has to be malted first and that’s an entirely different set of skills to master.

We want to discover what kind of terroir our little pocket of Canada can offer the whisky world. We have to think about the right barley variety to plant, and when to plant it. We want a variety that is going to grow well with minimal intervention on our part, is resistant to disease, and gives a good crop yield.

At the end of the season we need to test the barley to ensure it will malt well. If the growing season was too cold, too wet, or too hot (yeah right, it’s Quebec) then the barley will come out differently than another season. Big distilleries have the luxury of mitigating seasonal and regional differences in barley by blending massive amounts of barley from different locations together. It gives consistency but with a farm distillery, that’s not necessarily our first priority. Barley is a crop just like sugar cane and grapes and as a distiller I’m excited about the prospect of seasonal variation. Did I just hear someone say the word “vintage”?

Malting requires us to clean the grain of stems, twigs, and rocks so that we wind up with nothing but clean barley kernels. These then get put through the malting processes of steeping, germination, and kilning. During the kilning process we can peat with Canadian-cut peat from Quebec. Since we’re a new distillery and whisky takes time (three years to even be called “whisky” in Canada) it’s too early to judge the results but all signs are looking good for some delicious drams pouring forth in several year’s time.

Despite the vertical integration (an economics term roughly translating to “you can’t seriously be thinking of taking on this much work”) farm distillers face a dramatic number of challenges. Distilling operations are challenging enough, but we’re taking on the matters of running a farm and grain malting which are usually entire businesses on their own. That’s the price we pay for being whisky control freaks. And honestly, I wouldn’t have it any other way.

Distiller Matthew Strickland has extensive brewing, distilling and winemaking experience. In mid 2016 Matt started with District Distilling Co. from Corsair Distillery, where he led the research and development program, eventually leaving District in late 2018 to open a new farm distillery in Canada. Matt is a faculty member of...