Editor’s Note: This whiskey was provided to us as a review sample by Brown-Forman This in no way, per our editorial policies, influenced the final outcome of this review. It should also be noted that by clicking the buy link towards the bottom of this review our site receives a small referral payment which helps to support, but not influence, our editorial and other costs.

When I got this review to sample, I thought, “Well, all right, then, I guess.” I liked Woodford just fine, I suppose. I thought they put out quality whiskey but I haven’t been jump-up-and down excited when I come across it. I do have Woodford Straight Bourbon at home; sometimes I get around to it, but others take priority.

Quite frankly, I have found it to occupy that “what do I do with you?” space: Too good to make a Manhattan with, but not breathtaking enough to quaff on its own.

Not bad, by any means, but generally thought it was an expensive choice to make a bourbon ginger.

I say all this not to slag on the brand or its products, but to provide background on my headspace when encountering the sample of the Woodford Reserve Five Wood Bourbon. (Spoiler: I am surprised. Read on!) Recently we shared that this whiskey marks the first time in Woodford’s history that have been aged and then finished in five different barrels. It starts as a regular straight bourbon aged in oak. Then it goes through four more barrels: Oloroso Sherry, Amontillado Sherry, Ruby Port, and Tawny Port. 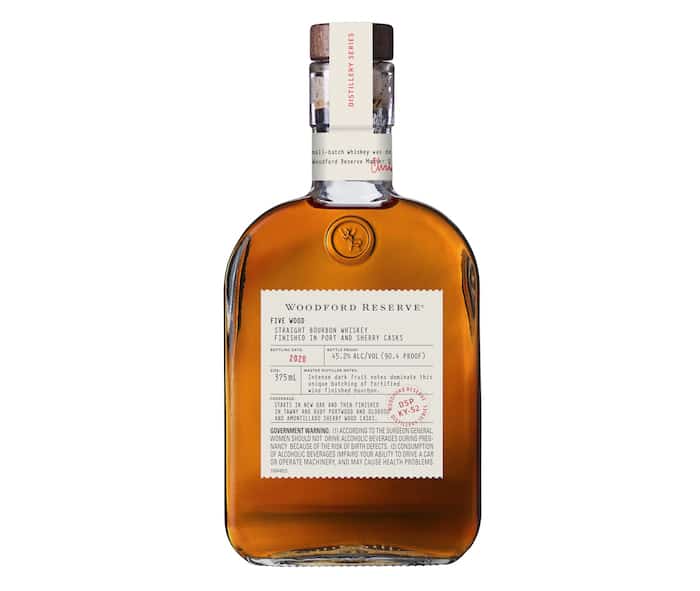 Appearance: Bit muted. A dusty amber. An old rust, flaking off when you pick at it. These are not bad things, but it’s got sort of an antique quality in its appearance.

Nose: Looks aren’t everything: The nose is quite welcoming. Cherries, blackberries. A full-on part of the berry family. Currants and overripe peaches, too.

Palate: Hey, this is really cool! Owing to its being aged and finished in five barrels, it has a complexity and a terrific variation in its palate. I believe I’ve said this before about another whiskey, the name of which escapes me at the moment (I’m old I guess), but this reminds me a bit of Charlie and the Chocolate Factory: the scene in which there’s a whole meal in a single stick of gum.

Fortunately or unfortunately I only had a Five Wood sample size, but that might be a good thing because I would be the Violet Beauregard of this whiskey. It starts a little clang-ey but then quickly shifts to lightly crystalized ginger—and I love me some ginger anything—then finishes really sweet and strong, like a perfectly balanced chocolate mousse, creamy and not too sweet.

I like Woodford just fine, normally, but this is interesting enough that it stands out above the others. Because it’s so complex I wouldn’t toss it into a drink. It’s meant to be savored, and neat. At 90.4 proof, this won’t blow up your mouth, and I would let it sit there for a while as you mull the coomplexities of this whiskey and life itself.

They seriously did really, really good with this one. 4.5 stars—I’m knocking off a half-star simply because of its scarcity. Something this fantastic really should be a regular release.