Editor’s Note: These whiskeys were provided to us as review samples by Brown-Forman. This in no way, per our editorial policies, influenced the final outcome of this review.

Here’s a classic case of better late than never (or is it?) In 2018, Woodford put out two special edition whiskeys as part of their Masters Collection–instead of their usual single version. Those two were the Woodford Reserve American Select Oak and Woodford Reserve Oat Grain Kentucky Bourbon.

In other words, it’s a chance to mix it up and try some one-offs they normally don’t get to do. This isn’t unusual among whiskey-makers, but the 2018 two-fer did stand out. The American Select Oak is a standard Woodford recipe though matured in casks made of oak from the Ozark forest. Its sibling, the Oat Grain Kentucky, modifies the traditional Woodford profile by adding oats to the mix. According to The Bourbon Review, it subs in a portion of oats with a final mash bill of 66 percent corn, 18 percent oats, 12 percent malt, and 4 percent rye. 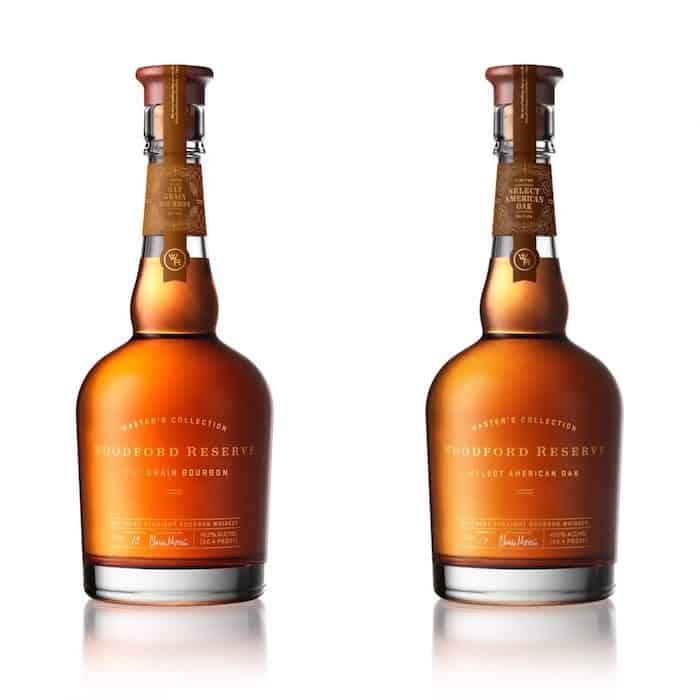 Appearance: Made from oak and looks like oak. A dark, established oak floor, worn well, shining with richness and depth.

Palate: More of a coolness than a heat. The mint is there but it’s engaging: more junior mint than menthol. And that’s interesting (to me) because whiskey can often taste fiery. This doesn’t, and it’s pleasantly unusual to have a whiskey with a cooling versus heating quality.

Final Thoughts: I think if you’re a Woodford groupie, you’ll really like this. I didn’t mind it and I appreciate the one-off oddballs but it’s not something I’d have  in regular rotation. If you can even still find it, sally forth; it’s probably more of a collector’s item by now.

Appearance: Damp, golden sand. More of a shiny birch than a glossy oak.

Nose: The oats definitely come through, but in a perfumey kind of way: It smells like when you get a latte but made with oat milk. I like lattes made with oat milk, so I’m on board. Also fruit: blueberries, and cherries, both sweet and dried. A soft sweetness.

Palate: Although said nose is sweet and a touch beguiling, the palate, for me, just..isn’t. This tastes tinny. Like it was rushed. At about nine years aged, it shouldn’t taste hurried but it does. I had expected a more well-rounded palate, but I didn’t get one. If this were added to a bourbon ginger it would work, but you could also do that with something a hell of a lot cheaper.

Final Thoughts: I mean, I love the thought behind this and the nose, but the taste on its own just didn’t work for me. It’s like someone pulled the risotto off the stove before the rice got creamy and the grain still crunches a little in your teeth.