The Kentucky Owl bourbon brand, as we’ve tracked over the years, began as a cult label one could only acquire if living in Kentucky. It remained in a very limited type status until acquired by Stoli in 2017, and today it is a bit more common to see bottles in wider distribution. While bottle prices have tended to be up there a bit over time, the newest release coming from them is aiming for new heights at a $1,000 price tag.

The new Kentucky Owl Dry State looks to squarely be targeted towards collectors. Official information from the brand indicates this expression to be a blend of bourbons aged at least 12 years (and up t0 17 years), resulting in what’s described as Kentucky Owl’s “rarest and longest aged expression to date.” It is also being released to commemorate a century since the start of Prohibition. 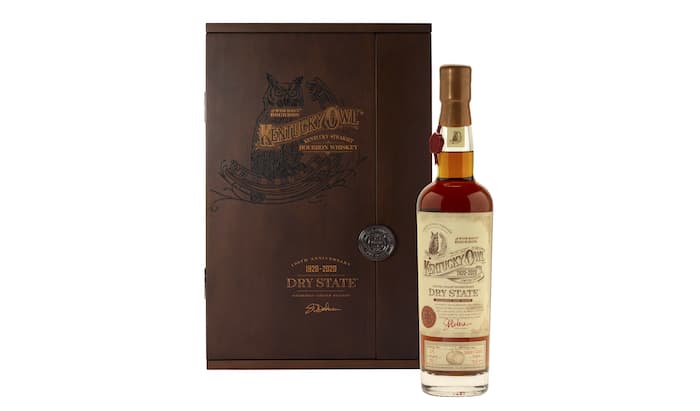 Additionally, several bottles from this release will be auctioned off by auction house Christie’s later this month. Each bottle will have a starting bid of $1,920, a nod to the year Prohibition went into effect in the U.S. Proceeds from the auction will directly benefit the National Restaurant Association’s Employee Advancement Fund, a charitable enterprise dedicated to establishing a long-term recovery solution for service industry workers who have had their careers stunted due to the adverse impacts of COVID-19.

“Kentucky Owl Dry State’s release during this centennial anniversary of Prohibition is a reflection on our past, but also an opportunity to support the hardworking men and women affected by the closing of bars and restaurants across the country,” said Dixon Dedman, Kentucky Owl Master Blender, in a prepared statement. “We’re also proud to work with the National Restaurant Association’s Employee Relief Fund and keep shining a spotlight on the plight of talented restaurant employees, many who are proud stewards of the bourbons we produce in Kentucky.”

Plans call for just 2,000 bottles of this bourbon to be released “at select spirits retailers around the world,” each pricing at the previously mentioned dollar value.