The 90 proof, six-year-old bourbon whiskey is bottled in a canteen-shaped bottle embossed with the number “6” as a reminder of unity, especially with the veterans, nonprofit veterans’ groups and first responders Soldier Valley Spirits supports. A hanging military-style dog tag showcasing the letters “LG,” as well as a replica signature of Lee Greenwood on the label, add to the overall patriotic theme of the bottle as well. The drink itself is a blend of Soldier Valley’s house-made bourbon, distilled from Nebraska corn, with sourced bourbon. 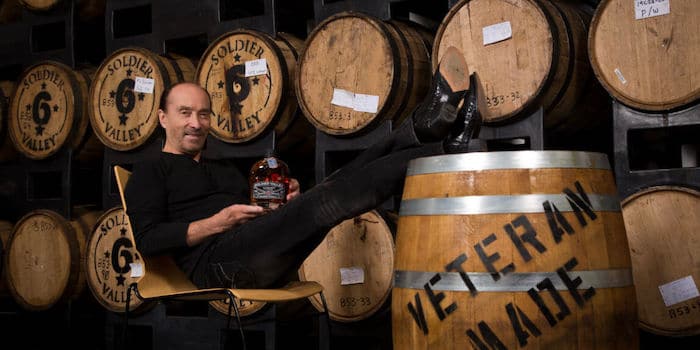 “Soldier Valley Spirits originated from a desire to celebrate and honor U.S. veterans who have served our great nation,” Founder of Soldier Valley Spirits and Patriarch Distillers Jeff Hadden said in a prepared statement. “When approached about partnering with Lee Greenwood on creating a special bourbon, we immediately were ready to make it happen as there is no other entertainer that does more for veterans than him. We are honored that he chose us to bring this product to the market.”

“I am extremely honored to be working with Soldier Valley Spirits. We have been developing this product for the past 5 months to make sure that it was the right product to put my name on. I believe we have it too,” added Greenwood. “This is a veteran-run company that continues to give back to veterans through the sale of their products and that is exactly what I support.”

The Lee Greenwood Signature Bourbon Whiskey is set to be released for at least $55 a bottle and will initially roll out along the Gulf Coast and on military bases across the country, with expansion throughout 2021. A portion of the proceeds from each bottle will be donated to veteran causes supported by the company, such as AMVETS National Service Organization, Disabled American Veterans and Omaha National Cemetery