Kentucky Owl To Get Its Own Massive Distillery Complex

From cult bourbon to acquisition by a large spirits brand to the recent debut of a new rye whiskey, Kentucky Owl has been on its way up the whiskey world’s ladder. The brand is now set to take another giant leap forward, with plans unveiled recently for a large distillery project known as Kentucky Owl Park.

Kentucky Owl Park, according to those behind it, will sit on a 420 acre site in Bardstown, Kentucky that was once a quarry. This land, purchased by Kentucky Owl parent company Stoli Group, will ultimately host a $150 million business complex that includes a distillery, visitors center, cooperage, rickhouses, bottling center, restaurant, a freshwater lake for fishing and recreation, a convention center and hotel, a vintage passenger train and a refurbished train station. 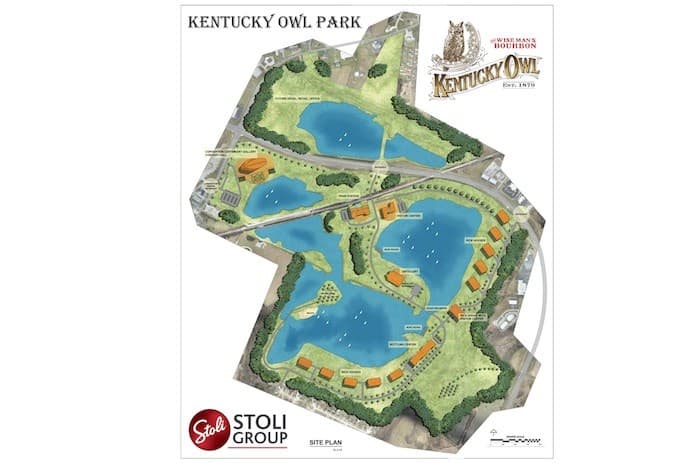 The park will also be home to Stoli Group’s newly created American Whiskey Division. It is said site prep and construction for the project’s first phase — which includes the distillery — could begin early next year with an opening targeted for 2020.

“Stoli Group will put great resources into these endeavors – both the distillery experience and the growth of this very important category for our company,” said Dmitry Efimov, Head of Stoli Group’s American Whiskey Division, in a prepared statement. “As master blender, Dixon Dedman will continue to manage the production of Kentucky Owl – the crown jewel of the new division, which will remain a small batch offering.”

What will ultimately be one of bourbon country’s largest single projects has in part been helped by government incentives, including up to $2 million in tax incentives from the Kentucky Economic Development Finance Authority.

“Global demand for bourbon continues to bring significant economic impact to Kentucky through jobs, investment and tourism,” noted Kentucky Governor Matt Bevin. “This new project by Stoli Group in the heart of bourbon country will serve to accelerate this trend. Stoli Group will offer numerous employment opportunities and support many families in and around Nelson County. I congratulate the company and look forward seeing this concept come to life over the coming years.”

57
Shares
481
Views
Share on FacebookShare on TwitterGet Our Newsletter
Get The Glenlivet 18 Year Old at ReserveBar. Shop now!