When Ralph Erenzo purchased the Tuthilltown Gristmill in 2001, he planned to turn the property and historic mill into a rock climbing haven. Unfortunately for rock climbers, neighbors of the mill in Gardiner, New York were not as keen on Erenzo’s plans. After a year of legal battles with the neighbors, Erenzo gave up on rock climbing and started investigating alternative uses for the mill.

With a micro-distillery favorable change in New York law, Erenzo partnered with Brian Lee to start Tuthilltown Spirits in 2003. When Erenzo and Lee started the company, information on how to start a micro-distillery was scarce. So, they pieced together information and equipment from a variety of sources, including eBay and an English translation of a German manual on distilling.

Two and a half years later, Erenzo and Lee released vodka made from apples grown from a nearby orchard. Following the vodka, Tuthilltown became the first whiskey distillery to open in the state of New York since Prohibition with the release of Hudson Baby Bourbon. 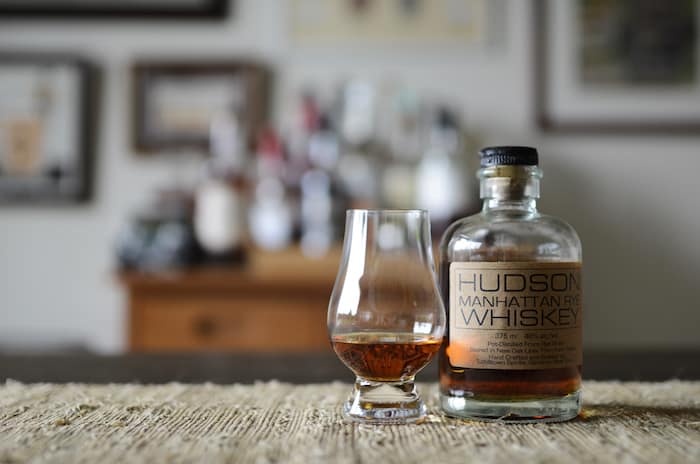 In hindsight, Erenzo and Lee’s timing could not have been better – they were one of the first craft distillers, and their distillery was up and running just in time for the American whiskey boom. As interest in American whiskey surged, Tuthilltown added additional whiskeys to their Hudson label, including Hudson Single Malt Whiskey, Hudson Four Grain Bourbon, Hudson New York Corn Whiskey, Hudson Manhattan Rye Whiskey (the subject of this review), and Hudson Maple Cask Rye Whiskey.

Fast-forward over a decade, and Tuthilltown Spirits is now considered the old-guard in craft distilling, with CNBC dubbing them the “Samuel Adams of whiskey.” Due to their immense success in the craft whiskey space, Tuthilltown drew the attention of large spirits manufacturers, and William Grant & Sons acquired the rights for production and distribution of the Hudson whiskey line in 2010.

Now, on to the task at hand, tasting Hudson Manhattan Rye whiskey.

Vital Stats: Hudson Manhattan Rye whiskey is bottled at 92 proof and made with a mash bill of 100% rye grain. As for an age statement, the label only provides that the whiskey is aged less than four years. Since Tuthilltown produces their products in small batches, it should be noted that the subject batch of this review is batch number four of 2015. Finally, Tuthilltown bottles the rye in 375 mL bottles ($44.99) and 750mL bottles ($49.99).

Nose: As with many young whiskeys, Hudson Manhattan Rye emits strong cereal grain notes. In addition, there are notes of cinnamon and oak.

Palate: Sharp spice notes of cinnamon, allspice, and pepper start off the front. In the mid palate, the spice notes are balanced by mint, dry oak, and a slightly bitter cereal grain flavor. The finish is mild with dry oak and light pepper.

If you are looking for a craft distilled rye whiskey (not a brand selling MGPI-sourced rye whiskey), Hudson Manhattan Rye is a good place to start. I would also recommend trying a pour if you see it sitting on the shelf at a bar. However, if you’re merely looking for a rye whiskey for the home bar, the on average $40 to $50 price tag for a 375 mL bottle makes this a difficult purchase to recommend.