Named for the eponymous Wisconsin county in which it is situated, Door County Distillery incorporates the surrounding terroir into its spirits. Single-source ground water from the Door Peninsula, naturally infused with limestone and minerality, is collected and treated in preparation for the distillery’s “artisanal” copper pot still, which was imported from Germany.In a similarly local vein to its water sourcing practices, the mash for Door County Distillery Single Malt Whisky comes from Shipwrecked Brew Pub in Egg Harbor, a microbrewery also located within Door County.

Master Distiller Kyle Thomas has described Door County Distillery as “craft distilling with a local flair,” and credits the distillery’s success in part to being on-trend with their spirit offerings. Since opening its doors in 2011, Door County Distillery has expanded from producing vodka, cherry vodka, and gin to producing several varieties each of vodka, gin, brandy and whiskey, along with bitters and moonshine. It is reportedly the first distiller in Door County to produce several of these categories. 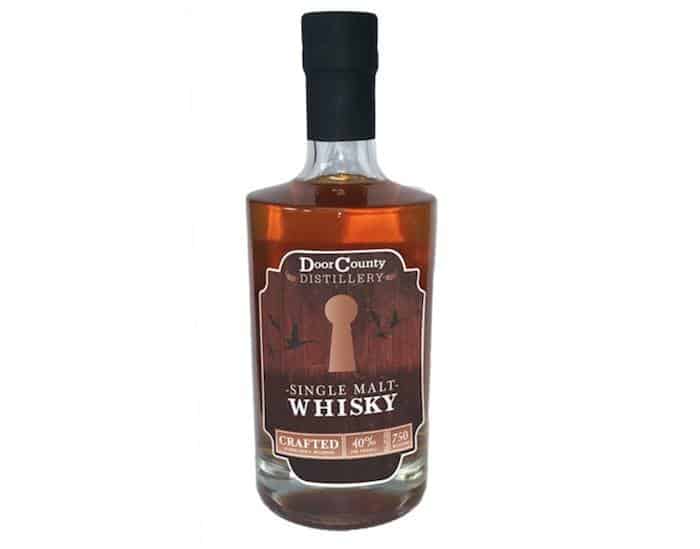 Vital stats: Door County Single Malt Whisky is made in small batches, incorporating mash from Shipwrecked Brew Pub, aged in American oak and is “100% Door County.” It is finished at 80 proof.

Palate: All-around mellow, in flavor and mouth-feel. Flavors of preserved lemon were balanced by warmer ginger tones that lingered in the aftertaste. Warming, without being spicy.

Door County Single Malt Whisky is a simple, pleasant whiskey. I can’t help but wonder what might result if this were given more time to age. As light as it is, it could get lost in too heavy of a cocktail – but, conversely, is nicely complemented and enhanced with a twist of lemon or splash of bitters. It might do well in a whiskey sour. While no direct or similar comparison pops into mind, given its single malt characteristics, Door County Whiskey might be of interest to Scotch lovers in the earlier stages of broadening their whiskey repertoire.

3.5
User Rating 3.67 (9 votes)
Sending
51
Shares
1.3k
Views
Share on FacebookShare on TwitterGet Our Newsletter
Cheers to the Dads! Personalize a bottle of his favorite whiskey to create a modern gift for the modern man. Use code: FATHERSDAY20 for $20 off your next order of $100 or more at ReserveBar