Of the varied regions across the United States that have at one time made some type of American whiskey, Pennsylvania and its style of rye whiskey certainly hold well in the annals of drinking history. It is here, for example, that the modern day Whiskey Rebellion Trail exists in part to highlight this area’s contribution to past and present day whiskey production. It is also here that, for the first time in decades, a long lost heritage grain known as Rosen rye was recently distilled into a whiskey by the last man to distill it so many years ago.

The Delaware Valley Fields Foundation is a non-profit organization in Pennsylvania that promotes local farming and its history. Since 2015, Rosen rye seeds have been cultivated and re-planted on agricultural test plots in State College, PA to produce enough usable grain to distill into whiskey. The Foundation’s SeedSpark Campaign, which seeks to resurrect seed varietals in enough quantities to give them to local farmers to grow, had gone from 5 ounces of Rosen rye sourced from the USDA in 2015 to over 900 pounds earlier this year.

500 lbs of that rye grain was then to be given to Stoll & Wolfe Distillery to turn into whiskey. The distiller in charge of that project there is the legendary Dick Stoll, the previously mentioned last man to distill from this grain.

Here now is where things get a bit more complicated for those understanding Pennsylvania whiskey history in somewhat recent times. Stoll was the last distiller at the old Michter’s Distillery in Pennsylvania when it locked its doors for the last time in 1990, according to information from the Foundation. The Michter’s brand subsequently was picked up a few years later by one Chatham Imports, and a decision was made to move it down to Kentucky.

Michter’s these days is one of the true darlings of the craft whiskey world, but at the time an entanglement occurred between them and Stoll and some new partners of his that aimed to do some whiskeys related to historical aspects of the old Michter’s. It is a long story what happened, but eventually Stoll and company just decided to form up in a different rebranding effort, and thus the new Pennsylvania distillery Stoll & Wolfe was born. 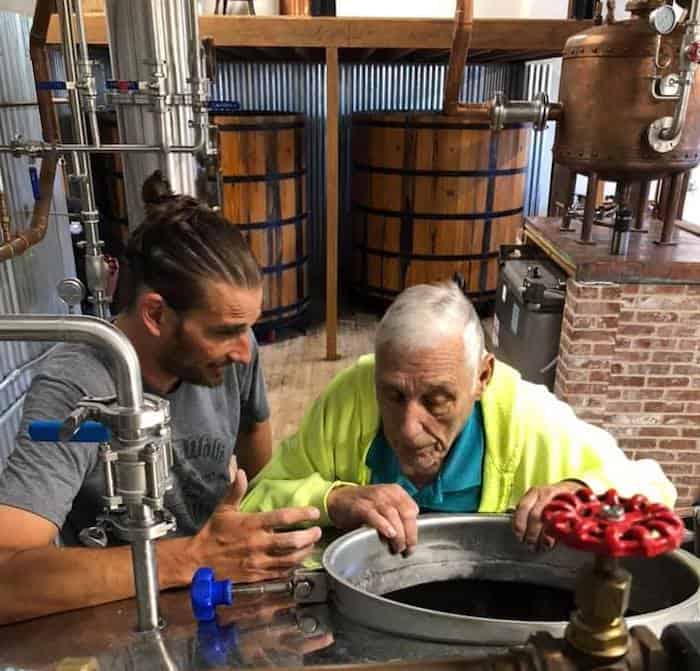 So, now understanding the relationship between old Michter’s, new Michter’s (which seems not to be involved in this project) and Stoll & Wolfe, we come back to the Rosen rye. Stoll, showing interest in using Rosen again, is said to have “revealed how impossible it would be to source.” Enter the Foundation  and its founder Laura Fields. It was she who felt “this vacuum in the grain market was actually an exciting economic opportunity for local farmers.”

Distilleries in Pennsylvania had been an “enormous economic driver in the agricultural supply chain before Prohibition and could fill an important role again.” Hence the partnership between them and Stoll & Wolfe.

“The last man to distill Rosen rye into whiskey at Michter’s Distillery in Schaefferstown, Pa will be the first to distill it here again,” said Fields in a prepared statement prior to the distillation happening last month. “Dick Stoll, of Stoll & Wolfe Distillery, is a legend in the distilling world, and it is an honor to be able to deliver our Rosen rye grain into his very capable hands.”

So, come the morning of this past September 3, Stoll led the process at the distillery for mashing and fermenting the rye grain. The subsequent mash was then distilled on September 7 and barreled shortly thereafter. One present during this time was Lisa Wicker, an “expert distiller and distillery consultant.” Tasting the Rosen Rye new make whiskey, she was quoted as saying that “it tastes like rye that’s been rolled in sugar. Like candy-coated rye. It’s delicious!”

Also present were some of the bloggers from It’s Just Booze Dancing, who provided some good coverage of the happenings.

As it stands now there was no immediate mention of how long this heritage grain rye whiskey might age, or what a price point for it might be once it is released. It is, nonetheless, an impressive feat by Stoll, the distillery team and those from the Foundation in bringing back Rosen rye from the brink.