What’s In A Historic Whiskey Name: Battling For Bomberger’s

Schaefferstown, Pennsylvania, is home to one of the nation’s oldest distilleries. Dating back to the mid-1750s, what we now know as Bomberger’s Distillery passed through a lot of hands in its 250-year history. Two Mennonite farmers, John and Michael Shenk, first distilled rye on the site; later, John’s son-in-law Rudolph Meyer owned the property. Bomberger’s Whiskey was produced there from 1860 to Prohibition.

After Prohibition the distillery struggled financially, and in the 1970s the facility began operating as Michter’s. The legendary A. H. Hirsch Reserve, a bottle now selling on the secondary market for $1,500+, was also made at the Schaefferstown distillery. In 1990 the business shut down, and its trademarks were abandoned. Today, that corner of Southeastern Pennsylvania remains a tight-knit, rural community, with Bomberger, Meyer and Shenk still written on many mailboxes and memories of a vital distilling history still living in the minds of many residents. 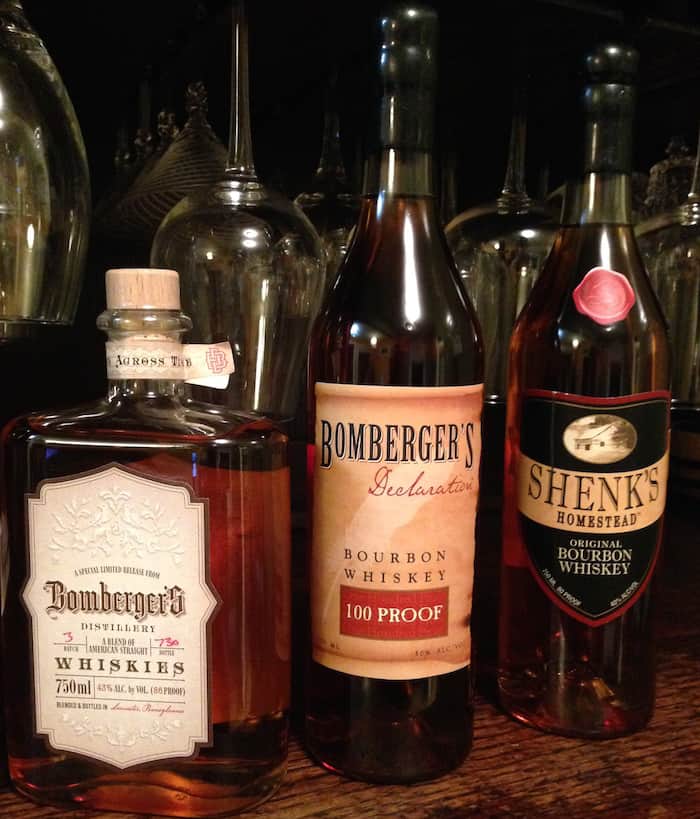 The saga of the name Bomberger’s in modern whiskey folklore, as told in these bottles. (image copyright The Whiskey Wash)

Enter Chatham Imports, a holding company that represents a handful of vodka, rum, baiju and gin brands. In 1996, Chatham Imports registered for Michter’s abandoned trademarks and began its revival of the Michter brand.

“The president of Chatham was familiar with the Michter’s brand because he sold it in the late 1970s,” said Brian Price, a representative of the distillery, to The Whiskey Wash. “He was also a Michter’s drinker.” Chatham moved Michter’s to Kentucky and began operations as a non-distiller producer selling “Michter’s US1,” a sourced product line loosely inspired by the original. The line hit the market in 2004, and has been expanding ever since, including the introduction of some super-aged 20+ year expressions.

Chatham Imports has made plans to jump into distilling, and according to Chuck Cowdery, the first whiskey barrels have recently been filled at their Shivley, Kentucky, location.

Meanwhile, about 600 miles to the northeast, local couple Erik and Avianna Wolfe formed the company Heritage Spirits, and began making moves to revitalize the abandoned Bomberger’s facility in Schaefferstown. The Wolfes partnered with Dick Stoll, the former master distiller at Michter’s Distillery who still lived in the area, to develop a product in line with historical tradition. Dick began working at Michter’s in 1955 as a laborer.

“He literally dug the foundation of that distillery before he became master distiller,” said Avianna Wolfe, co-founder of Heritage Spirits. Stoll trained under Everett Beam before running the plant up until its closure in 1990. He was even hired by the bank to do a final inventory on all remaining product in 1993, a gloomy post-mortem if there ever was one.

It turned out the old distillery was in deep disrepair, so Heritage Spirits planned to construct a new production facility in Lilitz, Pennsylvania, about 10 miles away. In December of 2012, Heritage Spirits trademarked the name Bomberger’s Distillery, and in 2014 they released the first bottling of Bomberger’s Whiskey since Prohibition: a sourced blend of 75% MGP bourbon (75% corn, 25% rye, and 4% malt) and 25% McKenzie Rye Whiskey made at the Finger Lakes Distillery in New York.

“Because we were sourcing we wanted to do some blending,” noted Wolfe to us. “Stoll used to do a lot of blending at Michter’s.” The spirit was designed to emulate Pennsylvania’s traditional high-rye whiskeys. At the same time, they got to work on designing their facility in Lilitz, with the goal of soon bringing whiskey production back to Southeastern Pennsylvania.

After a few legal volleys, it became clear that Chatham Imports, owned by an attorney, was not going to back down, even though their trademark was registered well after Heritage Spirits’. Facing $100,000 in legal fees to move forward with the lawsuit, Heritage Spirits decided to cut its losses and rebrand itself as Stoll & Wolfe. 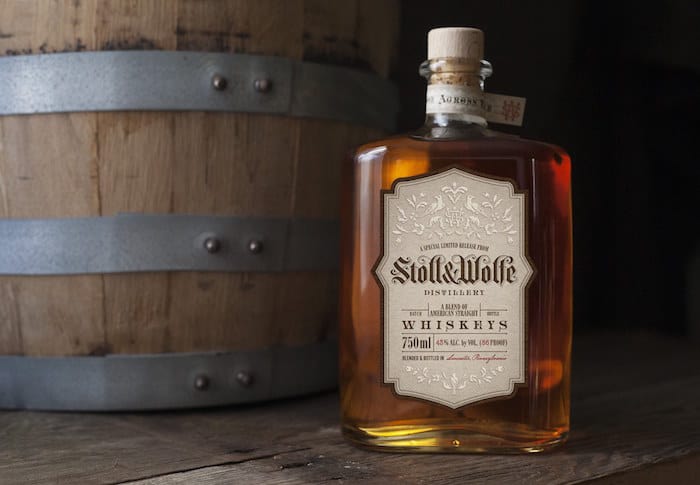 “The show’s over – thank god,” said Wolfe, “but our mission to resurrect local whiskey is the same. Our spirit is remaining the same, our plan to open a distillery in Lititz is still going to happen, but the timeline is a little longer. We’re looking forward to re-releasing, hopefully in the end of October. The packaging will be the same too, just the name has changed.”

Interestingly enough, Chatham Imports recently released a product called Shenk’s Homestead. It’s not listed on its website, nor was I able to find any publicity information about it anywhere online. We’ve written before about the perplexing opacity at Chatham Imports regarding sourcing and mash bills around this bottling, so I wasn’t surprised when I asked Price about the backstory of the Shenk’s Homestead product and he replied only “according to whiskey historians, John Shenk founded the Pennsylvania whiskey company that was later known by other names including Bomberger’s and Michter’s. Shenk’s is an 80 proof Kentucky Bourbon that Chatham sells.”

To a jaded whiskey consumer, the aim seems clear: quickly release products under every name associated with the old Bomberger’s distillery to establish use precedent. A future under-the-radar Myers brand roll out wouldn’t surprise me in the least.

Reviewing The Whiskies Themselves

Brand disputes aside, it is, after all, what’s inside the bottle that counts. We here at The Whiskey Wash were very curious as to how these bottlings would stack up against one another, so we went through traditional retail channels to secure them for a review. I then conducted a blind group tasting of the original Heritage Spirit’s Bomberger’s Whiskey bottling side-by-side with the Chatham Imports Bomberger’s Declaration as well as the mysterious Shenk’s Homestead.

Here are some abbreviated notes from that tasting:

Flavor: This is a very dimensional whiskey. Heavy and rich on the palate, the flavor is dominated by oak, maple, and molasses with a pleasantly hot, vaporous finish that includes a hit of anise/fennel as well as black pepper and burnt sugar. It’s a rich, complete taste, with many notes from all along the classic Bourbon flavor wheel. Particularly delicious with a splash of soda water.

Flavor: Initially dominated by creamy vanilla, like vanilla buttercream frosting. Finishes with some unremarkable butterscotch and maple notes and a short green wood, apple peel, and varnish-heavy finish. To me, this tastes like Maker’s Mark – no obvious flaws and quite pleasant, but just not particularly unique or engaging.

Nose: Fascinating. Quite sweet at first, something like a very ripe melon, followed by aromas of incense and flat cola. Hints of rye and paint sneak through, but the nose overall is more suggestive of a dry rum rather than traditional bourbon notes.

Flavor: Also very discrete, unique, absorbing, and not terribly bourbon-like. There’s a lot of spirit character instead of wood – incense, sandalwood, fruit compost, and bran astringency. This whiskey tastes pretty young, and there is a not-unpleasant vegetal quality to the midpalate. The finish is interesting and persistent, with distinct peppery rye spice notes. There’s a lot to taste here, and this was definitely the most intriguing of the three, if not the most outright delicious.

In summary, all three of these spirits were pretty darn tasty. That said, only the Heritage Spirits bottle is free from that unmistakable slimy sensation provoked by a company capitalizing on consumer ignorance. Chatham Imports has clearly developed excellent sourcing relationships, and their whiskey definitely tastes good, but don’t believe for a second that it has anything to do with the historic Bomberger’s distillery or the state of Pennsylvania, no matter how many German and Dutch names they slap on a bottle. If you enjoy them, by all means drink them; just know you’re paying for branding, not that alluded-to lineage of whiskey legend.