The Chicken Cock American whiskey brand, owned by Grain & Barrel Spirits, has another limited edition offering on its hands. Produced at Bardstown Bourbon Company currently as part of their collaborative distiller program, what they have this time around is a rye whisky finished in ex-blonde ale barrels from Louisville, Kentucky’s Goodwood Brewing.

The new Chicken Cock Ryeteous Blonde rye whiskey, according to those behind it, was finished in Chicken Cock Kentucky Straight Bourbon barrels that were used by Goodwood to age their blonde ale. Once the ale had completed its finishing process in the Chicken Cock Bourbon barrels and the beer removed for consumption, the barrels were then shipped back to the distillery and refilled with the rye whiskey.

No specific finishing time in these barrels was mentioned, though it is said “they were sampled periodically during the finishing process by Master Distiller Gregg Snyder.” 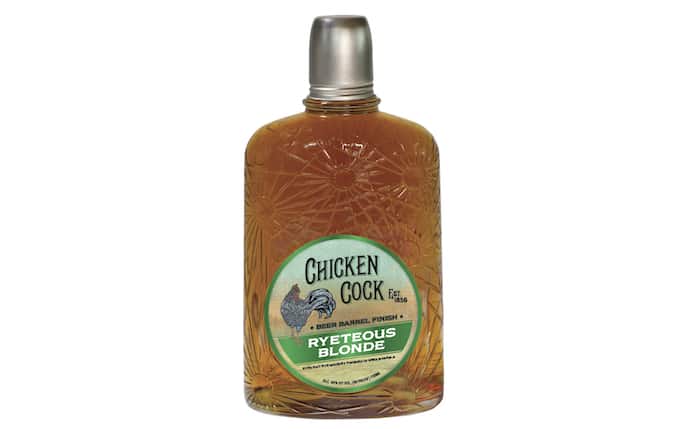 Ryeteous Blonde, bottled at 90 proof, is non-chill filtered and features a mash bill of 95% rye and 5% malted rye. It is bottled in a Prohibition-era replica apothecary-style bottle, with only 1,428 total 750 ml bottles being made available for around $90. It is available for sale online and also in select states, including AL, AR, CO, FL, GA, IL, IN, KS, KY, LA, MO, MS, NC, NY, OK, SC, TN and WV.

Official tasting notes for this rye whiskey indicate “an amazing array of complex spice notes, with cinnamon, brown sugar, hint of dark chocolate, slight grassiness, with complimentary overtones of malted barley and sweet oak. The taste features a plethora of spectacular flavors with notes of butterscotch, caramel, toffee, and allspice, followed by a hint of Toasted Oak. The ‘flavor explosion’ on the palate fades slowly into a sweet, long-lasting finish.”

Interestingly, this is not the first whiskey that finds itself having been influenced by Goodwood beer. Chicken Cock and the brewery did a previous collaboration, and Bardstown Bourbon also has done a couple of bottlings. Goodwood even has a bourbon out there under its own brand as well.