Bottled in bond whiskeys are an emerging thing when it comes to craft whiskey distilleries across the United States. As more and more of this category of distillery gain older stock that hits the criteria that allows for labeling as such, some interesting offerings are coming to retail. One such recent offering is a bonded wheat whiskey from Laws Whiskey House out of Colorado.

The new Laws Bonded Centennial Straight Wheat Whiskey, according to those behind it, is made with 100% Colorado grown Soft White Centennial Spring Wheat from Colorado Malting Company. In meeting the criteria for bottled in bond, this expression is a product of a single season, using the grain of a single harvest season, made by one distiller at a single distillery, and aged at least four years in a federal government-bonded warehouse. This whiskey is then cut and bottled at 100 proof (50% ABV).

“We want to lead the charge on defining what wheat whiskey can be,” said Al Laws, founder of Laws Whiskey House, in a prepared statement. “The distinct flavors of this heirloom grain really shine for us in this expression. 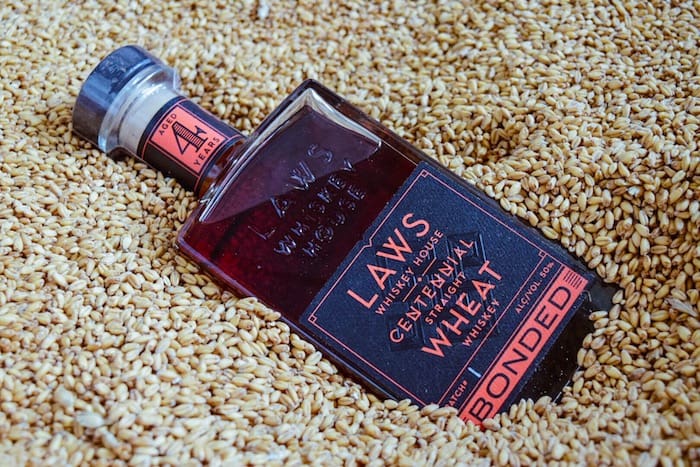 “This single grain whiskey release, which is consistent with our portfolio of serving top-notch niche bonded whiskey, showcases the robust flavor of Centennial Wheat planted specifically for us.”

What’s perhaps most unique about this whiskey is the fact it is one of the few wheat whiskeys to get the bonded designation (when it was first announced it was said to be the only such one, but that has since been corrected by their PR team). The only other one we are aware of to gain such a marker heralds from a distillery out of Oregon.

Plans call for the Bonded Centennial Straight Wheat Whiskey to be available across Colorado while supplies last. Official tasting notes for it suggest “aromas of mountain strawberries and orange marmalade that accentuate hints of alpine meadows and wildflower honey. Jasmine tea, sage and spruce tips fade into pink peppercorns, with crisp linen on the mouthfeel. The spirit finishes dry with a slight bitter, candied orange finish.”