WhistlePig each year releases a highly sought after rye whiskey collectible known as its Boss Hog series. For 2021 the offering coming around this time takes the form of a rye whiskey finished in ex-Philippine rum barrels.

WhistlePig The Boss Hog VIII: LapuLapu’s Pacific, according to those behind it, features straight rye whiskey aged for nearly 18 years in new American oak, followed by a double finish in high toast barrels that previously held small batch, single island, aged Philippine rum for between 7 and 10 years.

Of particular interest with these barrels is that, given the extended aging time of the rum in them, it is said by WhistlePig this enriched the rum’s “vanilla, caramel, and oak notes, mellows the profile, and adds layers of complexity to the final spirit. A high toast profile imparts another dimension of toffee and spice flavors.” 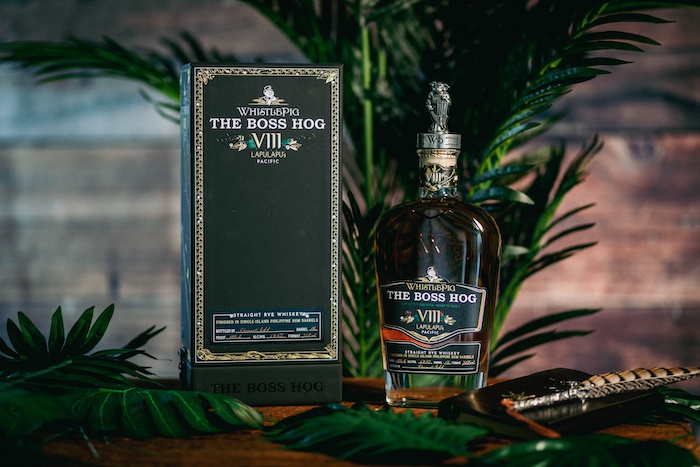 Theme-wise this whiskey follows on the heels of last year’s award winning The Boss Hog VII: Magellan’s Atlantic. “Continuing the epic circumnavigation voyage across the Pacific,” it is said to draw “inspiration both historically and symbolically from the Philippines where Magellan met his fate at the hands of Filipino hero LapuLapu during the battle of Mactan. Magellan’s journey ended in the Philippines on April 27, 1521, when the local victory dispelled the Spanish fleet.

“Five hundred years later, LapuLapu is celebrated as a symbol of strength and independence – his likeness captured in the hand-made, collectible pewter pig that crowns The Boss Hog.”

“On the heels of Magellan’s Atlantic, it was a great challenge to find the perfect finish for the most special Rye barrels in our warehouse,” said ays Meghan Ireland, Blender, WhistlePig Whiskey, in a prepared statement. “We were already tracing Magellan in depth, and when we discovered LapuLapu’s story we knew we had to track down the best Philippines Rum barrels we could for the sequel. Before maturing Rum for 7-10 years, the barrels were coopered from American Oak and originally held bourbon. In this way, they’ve made their own circumnavigation from American whiskey to the Philippines, and back again to us in Vermont.

The Boss Hog VIII: LapuLapu’s Pacfic is available in a 750ml bottle and is bottled at proof, between 104.8 – 106.5 (52.4-53.3% ABV), with a suggested retail price of around $500. Like the other editions of The Boss Hog before it, LapuLapu will be sold at a variety of premium liquor stores, bars and restaurants across the United States.