The premium American whiskey label from Jim Beam known as Basil Hayden’s is typically considered a high rye bourbon, but rye  whiskey is also a focus of this brand, as we’ve seen over the years with such releases as a regular rye, rye-bourbon blend, a rye blended with port and a rum finished rye. Now joining this line up is a 10 year old offering.

The new Basil Hayden’s 10 Year Old Rye Whiskey, according to those behind it, is the first rye whiskey the brand has created with an age statement. The mash bill of it is said to feature “a slightly spicy, yet approachable, rye resulting in an elegantly complex taste profile and a golden honey hue.” 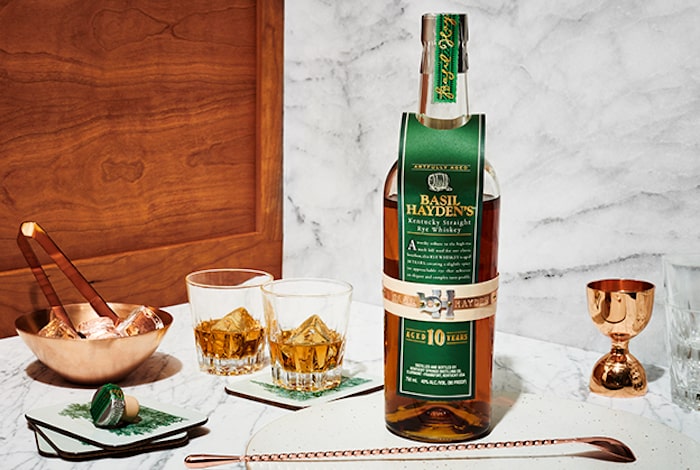 As it stands right now plans call for this whiskey to be a limited edition offering, bottled at 80 proof (40% ABV) and pricing around $70 per 750 ml bottle. Sipping suggestions for it indicate it is “best enjoyed neat, with a drop of water or on the rocks.” You’ll find some official tasting notes for it at the end of this article.

As a side note, for those unfamiliar with the Basil Hayden’s brand, it is described as having been created “with the intention of including everyone and inviting new users into the world of premium whiskey. The distinctive flavor of Basil Hayden’s Bourbon was originally inspired by the legend of a family recipe said to date back to 1796 when Master Distiller Basil Hayden’s Sr. broke ‘the rules’ and went off-the-beaten-path mixing the spiciness of rye with the smoothness of corn to create a light-bodied, mixable and smooth bourbon.

“Today, Basil Hayden’s is crafting its own story by providing a welcoming, yet versatile, sipping experience for whiskey drinks of all taste levels to share with friends and family.”

38
Shares
2.3k
Views
Share on FacebookShare on TwitterGet Our Newsletter
Cheers to the Dads! Personalize a bottle of his favorite whiskey to create a modern gift for the modern man. Use code: FATHERSDAY20 for $20 off your next order of $100 or more at ReserveBar