Late last year, Beam Suntory introduced a new permanent offering in this collection in the guise of Basil Hayden’s Dark Rye Whiskey, a blend of American rye, Canadian rye from the Alberta Distillery, and a dose of California port to, I suspect, add a fruity note to the finished spirit, as opposed to simply finishing the rye in port barrels (as this one we have previously reviewed.) How much of each is a mystery, but I would posit that there is as much port in the whiskey as they can get away with. It’s a combination reminiscent of the Alberta Rye Dark Batch release, which mingled Canadian 100% rye with Kentucky bourbon and Oloroso sherry.

For many hardcore rye enthusiasts, myself included, this may come across as simply too much port. When combined with the already sweeter Canadian rye, I fear the combination may bury those trademark pickle notes that often accompany the lean spice of American rye. Let’s find out if my suspicious are confirmed. 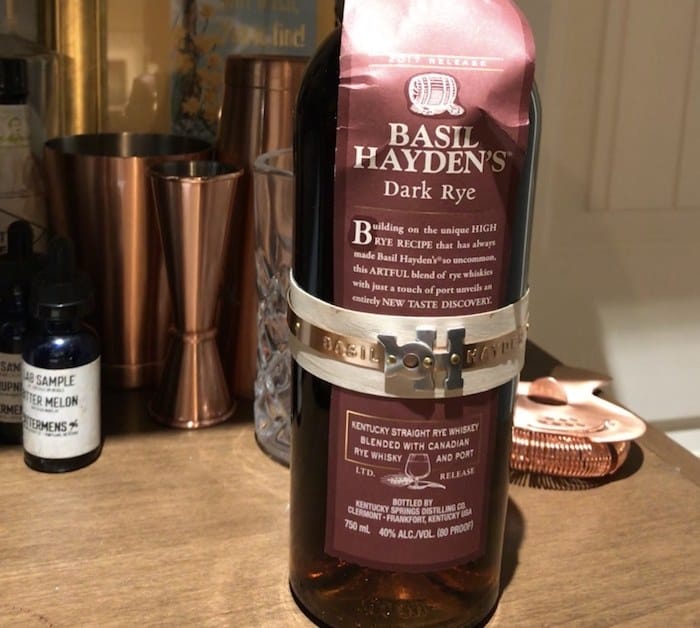 Vital stats: A blend of American rye from their Kentucky distillery, Canadian rye from the Alberta Distillery, and an addition of California port. Bottled at 80 proof, selling for around $40 to $50.

This is a rye for people who have little to no experience with rye whiskey and usually drink sweet alcohol. It's almost like a high-end flavored whiskey geared towards those who are interested in moving from light to dark spirits. Not the rye for aficionados, but great for adding to maple syrup, frappes, or using as a mixer in a cocktail. I would not drink this one neat.