Tennessee is making whiskeys worthy of your bourbon-loving respect. The days of looking down your noses at the products of Kentucky’s southern neighbor should come to an end. Premium, aged (and age stated), expertly crafted and blended whiskeys are the norm coming out of the Volunteer State these days, not the exception. No longer does Tennessee whiskey play the role of second fiddle to bourbon.

It’s been a whole year since I last addressed the argument of whether or not Tennessee whiskey is bourbon. (It still is.) Arguing that charcoal filtration negates Tennessee whiskey from being bourbon based on the subtractive effects on the distillate is as ludicrous as saying that using copper to remove sulfur violates those standards. The conjecture is tired, worn out, and just plain wrong. The Standards of Identity as laid out in the Code of Federal Regulations tell us it’s not bourbon until it hits oak. So it can’t be un-bourboned before that as long as no other rules are broken. Can we be done with this already?

My sincere hope is that this particular debate may be put to bed once and for all. There’s a much better conversation to be had about Tennessee Whiskey. Here I offer what is hopefully the final nail in the controversy coffin, a death blow to this dispute. 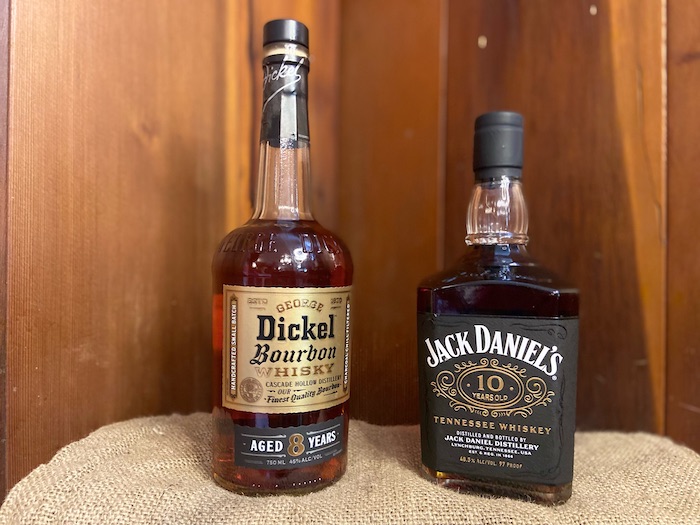 This year saw the inaugural release of a line extension from George Dickel, an eight-year-old bourbon. Dickel Bourbon is Tennessee whisky. The production of Dickel Bourbon is in no way altered from the production of George Dickel Tennessee Whisky. Not a single bit. Every drop of it went through Dickel’s unique maple charcoal mellowing, making it eligible for the Tennessee whisky designation. Yet, here it is, loud and proud, sporting the “bourbon” designation.

Could that possibly mean anything other than that Tennessee whiskey is bourbon? (The correct answer is no.)

In a nutshell, Dickel Bourbon is comprised of barrels that didn’t quite fit the profile for their Tennessee whisky. Instead of selling them to another brand to bottle as Tennessee bourbon, Nicole Austin made the call to keep them and blended them into an eight year, age stated bourbon at an incredibly reasonable price. For those of us on the southern side of the bourbon border, the Dickel Bourbon release was a strong middle finger to the mostly Kentucky-centric cynics holding on to the misguided loyalty to misinformation on the category.

Perhaps the combination of age stated, widely available, reasonably priced bottles is so foreign to the new generation of bourbon consumers that the concept just doesn’t compute. Some of us remember the “good old days” of bourbon, before it was a trending fad, when this was just called every day shopping and not “hunting.” By the way, you should definitely be out shopping for this bottle. At under $35 and on every shelf, it’s the dust-free dusty of the future.

Additionally, Dickel has been the source of many, many Tennessee bourbons for several years. These sourced barrels are bottled under various brands across the state. It’s safe to assume that any rectified product out there over 6 years old “distilled in Tennessee” came from the stock of George Dickel. Their Tennessee whisky stock, to be precise. Still, despite the common knowledge that these bourbons came from Dickel, the naysayers persisted, falsely claiming these barrels did not undergo the Lincoln County Process. They did.

It’s difficult to fully vindicate the Tennessee whiskey debate without including Jack Daniel’s. Master Distiller Chris Fletcher has publicly stated on numerous occasions that Jack Daniel’s could be bourbon, but that they choose to honor tradition by calling their bourbon Tennessee whiskey. It was Reagor Motlow that opened this particular Pandora’s box in an attempt to revive Jack Daniel’s.

Motlow’s quest to market his great-uncle’s namesake whiskey after Repeal is an oft-cited tidbit used to discredit Tennessee whiskey. The real story goes that, since Jack Daniel’s Old No. 7 met all the post-Prohibition rules of bourbon, it had to label itself as bourbon. (This is how the standardization of categories works; if you meet the criteria, you must label yourself as such.) The Motlows had no intention of calling Jack Daniel’s bourbon and so started a campaign to differentiate the brand. Reagor Motlow repeatedly petitioned the government agencies in Louisville and, after some “careful consideration” at Motlow’s insistence, was granted an exception in 1941.

The end result was that Jack Daniel’s didn’t have to be labeled as bourbon. Motlow did not win the Tennessee Whiskey classification he was seeking. Instead, the decision merely withdrew earlier objections to their proposed labeling. The official letter states that, after the “results of the analyses, it has been concluded that the whiskey in question has neither the characteristics of bourbon or rye whiskey but rather is a distinctive product which may be labeled whiskey.”

One can only imagine the extent of those “analyses”… and how a bunch of that “analyzing” might have led to an agreement.

Jack Daniel’s was the only producer in Tennessee from the time Prohibition was lifted in 1937 until Schenley’s Ralph Dupps rebuilt the George Dickel distillery at Cascade Hollow in 1959. Dickel embraced the Lincoln County Process as part of their production in order to compete with Jack Daniel’s, effectively cementing the tradition until it was formally defined in Tennessee legislature in 2013. (2013!)

That formal definition (Tenn. Code Ann. § 57-2-106(a)) mimics the definition of bourbon, verbatim, with additional caveats. After meeting all qualifications of bourbon, Tennessee whiskey must be manufactured and aged in Tennessee and filtered through maple charcoal prior to aging. Tennessee distillers like to call this “bourbon plus.”

I addressed this question with my very first article for Whiskey Wash five and a half years ago. Now that we’ve settled this- again- let’s have a real conversation about the incredible products being produced in Tennessee. With 95 registered distilled spirits producers and bottlers, you don’t have to like them all. Just don’t tell me you don’t like them at all.