Grain to Glass: A Technical Overview of the Whiskey Making Process

Editor’s Note: This article comes to us courtesy of Liz Rhoades, a senior research scientist at Diageo who impressed us enough with her knowledge of whiskey over time that we asked her to contribute to our whiskey writing community. Please be aware this was not solicited to us by Diageo, and no compensation was given to them for it.

One of the largest factors impacting the process and final product is the “mash bill” – cereal grains selected to produce fermentable extract for the yeast.  For example, in order for Bourbon or Rye to meet the legal definition in the USA, they must include a minimum of 51% corn or rye, respectively.  However, a multitude of other raw or malted cereals can be used, such as: barley, oats, wheat, or quinoa.  The raw material(s) selected largely dictates everything downstream from: the whisk(e)y’s class and type, processing requirements, and flavor profile.

Upon delivery and intake into the distillery, the grains are screened, de-stoned, and passed through a series of magnets.  Screening removes unwanted particulate that may have been transported with the grain from the field or malt house. De-stoning and magnets are critical safety measures to remove pebbles or metal that could cause sparking in the milling process potentially leading to an explosion. 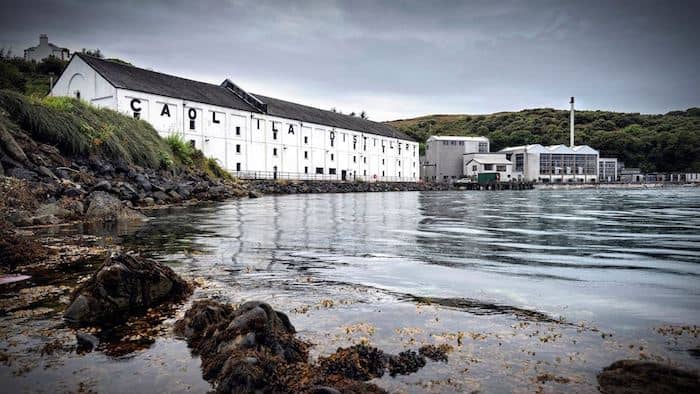 Grains must be milled to break them open and expose the starch contained within for conversion to fermentable sugars during the mashing process.  Often, roller and hammer mills are used, but the type of mill utilized largely depends on the selected cereal and solids separation process. Malted cereals, such as malted barley or wheat, are typically milled using roller mills and un-malted cereals, such as corn, are milled using a hammer mill.  Roller mills gently crush the cereal between one to three sets of rollers, while hammer mills pulverize the cereals with rotating hammers until they pass through a screen and exit the mill.  Roller mills pair with separation applications (i.e. lauter-tun) where a “clear” wort (sugary extract from malt) is desired, and hammer mills are used for in-situ (grain in) fermentations.  After milling, the grain particles are transferred to the mashing vessel.

Mashing is the process of extracting all of the available starch from the cereal and converting into fermentable sugars. It begins with the mixing of the milled grain with water and then taking it through a series of controlled temperature rests.  These rests are critical for both dissolving starch and enzymatic activity.  Enzymes are responsible for the degradation of proteins and starch that have been exposed during milling; each rest is specifically selected to allow the enzymes to function at their optimum level.  Upon completion, the mash is transferred to a fermenter.

En route to fermentation, there can be an additional step for solids removal in a process called lautering. Only cereals that were milled using a roller mill can be lautered as the pulverized grist from a hammer mill will clog the separation surface. The result of lautering is a clear wort being sent to the fermenter. Whether the mash is lautered or not, it must be cooled to prevent the yeast from dying upon being introduced. A typical temperature range for cooling is 20-30⁰C.

Fermentation is the process by which yeast convert sugars into ethanol. The majority of the converted sugars from the mash (~95%) are consumed in the production of ethanol and CO2 (in roughly a 50:50 ratio).  The remaining sugars are utilized to produce organic acids, congeners (aroma-active compounds), energy in form of heat, and in reproduction at the beginning of fermentation.  Of the many reactions taking place, the most critical are the formation of ethanol and the generation of congeners.  Fermentation speed and success is a function of many variables, such as: sugar concentration, nutrient availability, temperature, pH, number and health of the yeast, and the presence of other contaminating organisms (lactic acid bacteria and wild yeast).  If any parameter is out of specification, the yeast may become stressed which could negatively impact fermentation performance and yield.  Once fermentation has completed, approximately 3-5 days later, the fermented beer is then transferred to the beer well (a holding vessel) in preparation for distillation.

Distillation proceeds via one of two process types: batch or continuous. The main difference between these two processes is that with batch, the entire fermenter volume is added to the still at once, and with continuous, the volume of the fermenter is added at a constant rate over time. From an operational and sensory perspective, this difference cannot be overstated as the products of each process can be quite different.

In the operation of a pot still (batch), heads and tails cuts are made at the beginning and the end of the distillation run, respectively. When said cuts are made can be based on several factors, including temperature, %ABV (alcohol by volume) of the distillate, sensory, or time.  Essentially, the timing of the cuts is a decision made by the distiller for selection of the compounds desired in the final spirit. With batch distillation, there often are two or more sequential distillations that take place; first, the stripping run followed by one or more spirit runs.  The goal of the stripping run is to concentrate the ethanol produced during fermentation.  As such, a heads cut is made but a tails cut can be omitted. The purpose of the spirit(s) run is to rectify (or purify) and further concentrate the spirit; therefore, both heads and tails cuts are made. The end product is a spirit of approximately 60-65% ABV, however higher ABV’s are possible depending on the still’s operating parameters.

Continuous distillation utilizes columns made up with horizontal trays or plates.  The plate design can vary, but the most common types are: sieve (designed to handle solids) and bubble-cap (solid-free). Generally speaking, sieve trays are associated with “stripping” and bubble-caps are associated with “rectification.”  The trays serve as liquid-vapor contact points where mini-distillations take place. This results in the concentration of different groups of compounds throughout the height of the column, with highly volatile compounds at the top and low and non-volatile compounds towards the bottom.  Therefore, the column is broken into multiple segments or fractions.  Typically, one or two columns are used.  A single column distillation process is done using a “beer still,” which is approximately 75-80% stripping plates and 20-25% rectification plates situated at the top.  Beer is fed on the top sieve tray, resulting in solids, non-volatile, and lower volatility components travelling down the still, and higher volatility components travelling up into the rectification section.  A beer still is commonly used in conjunction with a doubler, which is essentially a pot still that is fed continuously, and this will contribute additional rectification.

In a two column system, beer is stripped in the first (fed from the top), and then volatiles generated travel into the bottom of the second for rectification.  In lieu of making cuts, a spirit draw plate can be selected for distillate collection where ethanol is highly concentrated and contamination of undesired compounds (i.e. methanol and butanol) is low.  With either batch or continuous, there are many variables that can be manipulated which can affect the quality, flavor profile, and regulatory impacts of the distillate, and furthermore, the eventual matured whisk(e)y.

After distillation, the distillate is transferred to barrels for maturation. The majority of the barrels used for whisk(e)y in the United States are 53-gallons and constructed of new, charred American Oak. Maturation is a complex process, as there are likely hundreds of chemical reactions occurring between the wood, char-layer, oxygen (free-flowing from the warehouse atmosphere), environment, and the spirit itself. Some of these reactions occur within the wood or at its surface and some occur within the liquid with the extracted compounds from the wood. Cellulose, hemicellulose, lignin, tannins, lactones, and eugenol are among the extracted compounds in addition to their heat degradation products formed during the toasting and charring process.  The reactions occurring in the spirit during maturation give the spirit color, sweetness, body, and a wide range of aromatics, including vanilla, caramel, coconut, dried fruit, and baking spice.

Maturation often lasts four or more years, after which, the barrels are emptied and the whisk(e)y blended.  Reduction in ABV, from cask strength to roughly 41-46%, is done using high quality water as improperly treated water could easily taint the final liquid or cause visual defects.  As a part of post-maturation processing, the whisk(e)y may also be filtered by one of several methods.  Typical regimes include bag or cartridge filters to remove barrel char and other solids, and chill filtration.  Chill filtration is performed at low temperatures (often 0⁰C), removing haze-forming compounds, which can impact the clarity of the final spirit.  Once filtration is completed, the liquid is reduced one last time to desired bottle-strength and packaged.