Editor’s Note: These whiskies were provided to us as review samples by Balblair. This in no way, per our editorial policies, influenced the final outcome of this review. It should also be noted that by clicking the buy links in this article our site receives a small referral payment which helps to support, but not influence, our editorial and other costs.

On the bank of the Dornoch First sits one of Scotland’s oldest distilleries— Balblair. Founded in 1790, the original site was abandoned two years later to move production closer to the railway. Balblair Distillery operated under the Ross family for a whole century until Alexander Cowan took over. Sadly, like most distilleries at the beginning of the 20th century, Balblair shuttered.

Balblair has changed hands several times since the 1970s but is presently owned by International Beverage Holdings. In 2007, they made the move to release Balblair as a vintage whisky. After new branding with a contemporary flair, the Highland distillery launched its range of age statement expressions. This is their core collection, and they also have a travel collection.

There are four age statements available; the 12-, 15-, 18-, and 25-year-old. Below, you will see our review of these whiskies based on centuries of tradition. 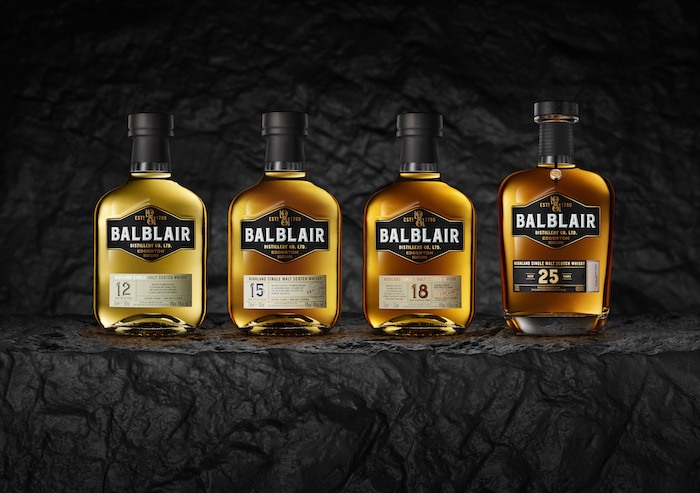 Nose: Damp earth like garden mulch hits the nose first. Next up is smoke, the kind that comes from a wet pile of leaves and grass. Soot and burnt orange meet in the middle, while mint and clean linen follow up at the end.

Palate: The whisky has a watered-down mouthfeel. It is quite bland in flavor, however it is bold with smoke. The faint sweetness comes from honey. There are some touches of black pepper, but other than that there is only an essence of fruit.

Final Thoughts: For a 12-year-old whisky, there are far more whiskies of the same age that taste better. This particular whisky of the core Balblair collection is comparable to a tangerine La Croix because the flavor is so subdued. It goes down a little harshly because of the ABV. Overall it is a mediocre single malt, and for me, it comes in last place of the age statements. If making cocktails that call for scotch, then the 12-year-old is a good choice.

Nose: Oatmeal mixed with cinnamon brown sugar is the first thing I notice. There seems to be a sour tinge to it, almost like over-fermentation. Dried apricot and clove come through in the middle. Dried wood rounds out the end.

Palate: The mouthfeel is both chewy and soft. It is spicy from the clove that comes off the nose. It is dry with oak but does not make the mouth pucker. Black pepper and cinnamon are bold. The smoke is not as brazen like it is in the 12-year-old. On the finish, garden soil provides an earthy taste.

Final Thoughts: Of the aged statements from Balblair, the 15-year-old ranks as the top whisky in the collection. It offers more flavor while keeping a soft mouthfeel. With a few drops of water, the baking spices mellow out.

Nose: Honey greets the nose at the beginning. Orange, reminiscent of marmalade, mingles with cinnamon almost like a picturesque breakfast of the best french toast. However, there is a small touch of acetone underlying the whisky. Clove and mint slip in at the end.

Palate: The whisky has a soft mouthfeel and is light. It is overly oaky, but also, the whisky is harsh with nail polish remover. That goes away quickly leaving a slight bit of smoke. The dram mainly reminds me of a damp forest floor.

Final Thoughts: The nose is far more interesting, but it is a step above the 12-year-old. It has some harsh elements, but with a few drops of water they ease. On the other hand, water and ice numb any detectable flavor that is not oak.

Nose: Cherry and demerara sugar give off a syrupy quality to the dram. Fresh garden mint and toffee meet in the middle. Near the end, the aroma of orange and nutmeg is found.

Palate: The dram has a honey-like sweetness to it but is not syrupy compared to the nose. Orange segment and dried cherry fill out the middle. It is earthy near the end with some peat. However, it has a dry, oaky finish similar to mulch or barkdust.

Final Thoughts: The 25-year-old whisky is better balanced than the 18-year-old. While it offers fruit both on the nose and palate, it has a tad too much oak and earth. Out of the Balblair collection, this age statement comes in second place.