Blended malt whiskies started coming into vogue about ten years ago, thanks to the work of John Glaser and his famous/infamous Compass Box releases. Over the intervening years, I’ve tasted The General, Circus, This Is Not A Luxury Whisky, 3 Year Old Deluxe, and many other bottlings that really knocked my socks off.

I’ve also tasted some Wemyss (pronounced “Weems”) releases that were fairly good, as well. I’m sorry to say that Spice King is not among them. However, it’s worth pointing out that Spice King releases have stayed reasonably priced as inexpensive blends that are a bit more exotic, perhaps, than Naked Grouse, Sheep Dip, or Monkey Shoulder, but not in the same ballpark as John Glaser’s handiwork.

Ironically, even though Wemyss blended malts carry less gravitas than Glaser’s daring and dramatic blends, the Wemyss family is far more distinguished than Glaser’s American Midwestern stock, with a significant property in their ownership that dates back to the 19th Century. Today, barley is grown in the same fields where John Haig once built his first distillery.

The name Wemyss comes from the Gaelic word for “caves.” Believe it or not, the Wemyss family castle is built among caves on the Firth of Forth, which looks back towards Edinburgh, and has been in the family for upwards of six hundred years.

From a marketing standpoint, Wemyss is certainly capable of playing the “rare and expensive” whisky game. Folks at this company are anything if not resourceful. But when the winning cards from their deck are set down on the table, so to speak, they usually hail from single casks of single malt Scotch whisky.

I’m thinking of “Hike to the Haven,” which is a 25 Year Old Bunnhabhain cask from 1990 that sells for upwards of $200 per bottle. Would I be interested in reviewing such a whisky? Oh hell yes! But that’s not a card I’ve been dealt today…so let’s get back to the matter at hand.

Spice King is an eight year old that is not meant to be a masterpiece of rare and wondrous blended single malts, like some upscale Glaser blending. Rather, it’s more of a workhorse. Let’s give the whisky a kick, shall we, to see how it performs? 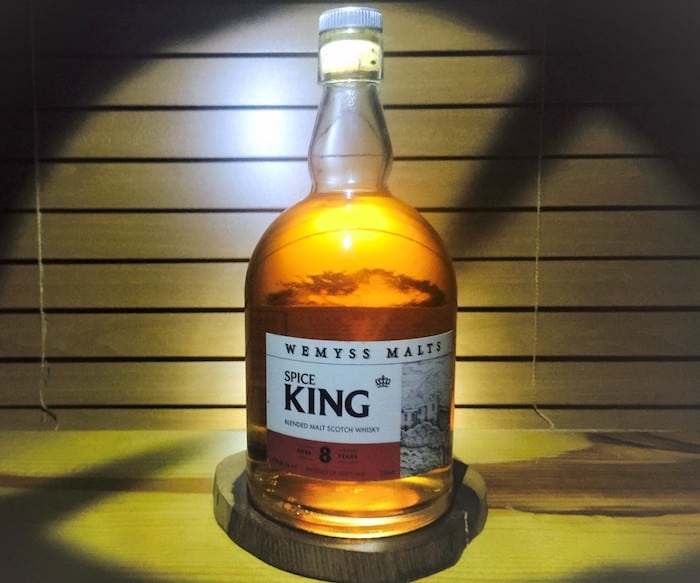 Nose: Baby vomit; marine air; burned plastic; cumin; fried plantain; wet sand. Peat comes through, along with the subdued, yet still fiery, temper of a young spirit with no wood presence to speak of.

Palate: Think Talisker mixed with olive oil and melted vanilla ice cream. The spicy attack is just not there; it’s been replaced by a watery alternative with saccharine-like overtones. I’m also getting notes of camphor, fried egg, brown sugar, and petroleum jelly. The length of the finish is short. On the deathbed, one’s tongue feels coated with a layer of wet, vanilla-flavored sand.

The muted, though obvious, Talisker note in Spice King 8 Year Old could have been better presented. While sipping at this dram, I found myself craving a fiery young Talisker in a less adulterated form, such as 57 Degrees North. Other whiskies in the Spice King seemed to detract from my overall impression. They tend to sweeten and stretch out what otherwise might have been a nice, smoky, Island dram. Perhaps it's worth mentioning that a bottle of Talisker 10-Year-Old costs about the same as an eight year-old Spice King in many parts of the United States.

All told, it was fun trying a peaty blended malt from Wemyss, a company, which, on occasion, been known to steal the show with amazing single malt Scotch whiskies from handpicked casks. In fact, if you are a fan of delicately complex peated Scotch, then keep an eye out for "Mocha on the Deck." 668 bottles of this promising broth were produced from a nineteen year old cask of Bowmore. Just remember: you get what you pay for.  Wemyss's 1998 Bowmore is priced at $130.