Whisky Review Round Up: Glenmorangie

Editor’s Note: These whiskies were provided to us as review samples by Glenmorangie. This in no way, per our editorial policies, influenced the final outcome of this review.

Glenmorangie, rhymes with orangy, is a scotch brand that should be in everyone’s whisky collection. It’s the brand I reach for when someone tells me they don’t drink scotch because they believe the misconception that all scotch is a peaty uppercut to the jaw. Glenmorangie is perfumy and light, and reigning in at 2ppm (phenol parts per million) makes this scotch ever so approachable.

How does Glenmorangie manage to produce such a light and perfumy scotch? The answer can be found just by looking at their stills. In 1843, when Glenmorangie was founded, they acquired their stills second-hand from a gin distillery. The stills are extremely tall, the neck specifically is about as tall as a full-sized giraffe, which allows for only the lightest and purest vapors to make it to the top. Secondly, Glenmorangie uses mineral water from the Tarlogie Springs that sits above the distillery. The sacred springs is the product of rain forced through sand and limestone for centuries.

Located near Tain, on the shore of the Dornoch Firth, Glenmorangie has been ahead of its time with experimenting with different cask finishes. Before being transferred to finishing casks, the scotch is aged 10 years in ex-bourbon barrels. In this round up, the scotch is matured in Oloroso and Pedro Ximenez sherry, port, and even sauternes casks.  Let’s see how they fare. 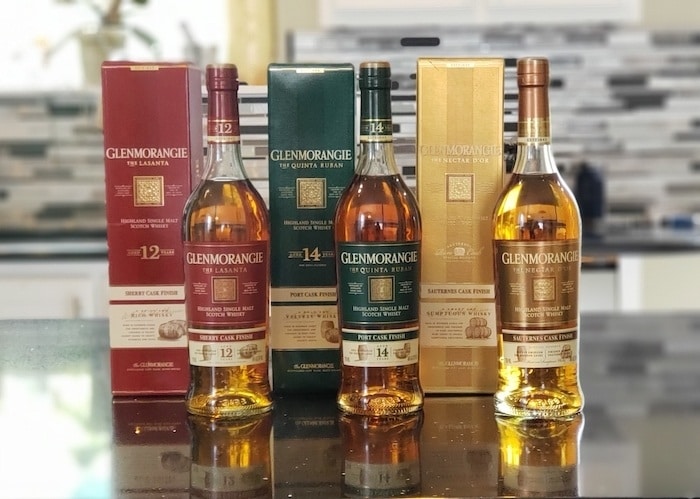 Nose: Right off the bat, the Lasanta is floral and fruity. A confectionary dream with notes of marzipan, powdered sugar, and toffee. I mostly get fresh orange and honey,

Palate: The mouthfeel is creamy, soft, and light. The ABV adds warmth in a balanced manner with the flavor. Lightly sweet, like when you get to the bottom of an old fashioned where the undissolved sugar has been sitting. The sweetness dissipates and brings forth baking spices like nutmeg and cinnamon. Juicy orange with a hint of raisin really pops. The finish is extremely soft, with touches of straw and walnut.

Final Thoughts: In Gaelic, “Lasanta” means warmth and passion. This is exactly the right name for this warming scotch from Glenmorangie. Perfect for the fall and winter, perfect for cocktailing with or sipping neat, and perfect for introducing scotch to novices. I can see some finding the palate to bland or too sweet, but overall it is a superior whisky at an affordable price.

Nose: Overpowering butterscotch hits right away at the forefront. The dram is layered with cereal grain, cool mint, and walnut. There is a tinge of bright orange.

Palate: Orange hits the tongue first. It is light and supple before turning peppery and warm. Initially, I get a sweetness of marzipan, but then it turns slightly sour. The finish is bitter similar to a high percentage dark chocolate.

Final Thoughts: The port has truly made its impact on the whisky, hence the name for this Glenmorangie. The ruby port casks come from the wine estates in Portugal, known as Quintas. Ruban is Gaelic for ruby. The Quinta Ruban is pretty sweet and delicate. It is nice to sip, and I would enjoy this in a cocktail. The increased two years on the maturation is impressive and welcomed compared to the 12-year-old.

Appearance: Deep, rich gold like the box it comes in.

Nose:Before opening up to vanilla pods and lemon zest, the whisky singes the nostrils even with an open mouth. It is super citrusy and sweet like lemon chiffon cookies.

Palate: Drinks hotter, and almost seems like the faintest bit of smoke is at the back of the tongue. Lemon and orange peel stand out with waxy honeycomb.

Final Thoughts: Out of the three Glenmorangies, the Nectar D’or, or “Nectar of Gold,” is my least favourite, but still very good. It is the least sweet of the whiskies, which is not necessarily a bad thing. While enjoyable, I felt there was something lacking. It was a little too hot for my liking with how delicate Glenmorangie is in general. Overall, it is smooth for lack of a better word.