Now, when you think of whisky made in the United Kingdom, my guess is your mind goes to one of two places: good old (Northern) Ireland, and, of course, Scotland. But, since the turn of the 21st century, there’s been another player in the modern era of U.K. whisk(e)y production: you guessed it… Wales. (If you did guess correctly, don’t pat yourself on the back too hard – your only other choice was England… though, to be fair, England is getting itself into the whisky game as well.)

It’s got to be hard when your closest neighbors are so integrated into the tradition of whisk(e)y that to simply think of the spirit is to think of them, but Wale’s first modern distillery, Penderyn, has been hard at work over the past decade to prove that no single country owns a monopoly on good whisky.

As with most of the world’s distilleries, the late 18th and early 19th century temperance movement struck a pretty fatal blow to Wales’ whisky producers, and the last Welsh distillery closed its doors in 1910. It wasn’t until Penderyn opened shop in 2004 that the Welsh dream of whisky was reborn. Since then several other distilleries have had successful openings, ushering in a new age for non-North Irish, non-Scottish, non-English U.K. whisky production.

Penderyn has been busy over the last ten years, and currently sells a number of different single malts, organized more or less into three main groups: Dragon, Gold, and their special/limited edition offerings.

Today we’re focusing on one of their Gold offerings, their Madeira whisky, which has been “aged in ex-bourbon barrels and finished in ex-Madeira wine casks,” imported from the Madeira islands in Portugal – the latter giving the whisky a distinguishing golden-hue. On their website Penderyn has placed special focus on their distilling process and the materials they source for their whiskies – the kind of attention to detail that, in my experience, usually points to a company that knows what they’re doing.

But you can talk all you want about your specially designed single-pot copper stills (designed to cut down on production time and energy) and your limestone-filtered water… the real test, as always, is in the flavor. Penderyn has done wonders for the reinvigoration of Welsh whisky production – of that there’s no doubt. But have they earned the right to stand toe to toe with their Irish and Scottish contemporaries? Let’s find out. 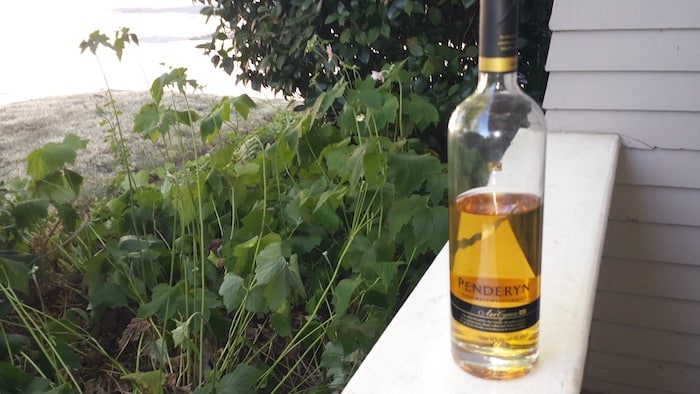 Vital Stats: The Penderyn Madeira Single Malt is sold in a 750 ml bottle. Made with barley, aged in ex-bourbon barrels (no age statement provided), and finished in ex-Madeira wine casks, the Madeira comes in at 92 proof. It currently retails for approximately $55.

Appearance: The sub-title for Penderyn’s Gold line of whiskies is “Aur Cymru,” which translates to “Welsh Gold.” In the glass, I’d say that the Madeira visually occupies a category that I’d describe as closer to a pale blond than gold, but hey, close enough. It has thin, slow legs.

Nose: A sweet nose, somewhat sharp, with a hint of liquorish, black cherry, and raisins.

Palate: The palate starts off with a bit of a kick, cinnamon and cloves, and then crawls back onto the tongue into a sweet mid-mouth warmth, finishing with elements of cantaloupe, vanilla, and just a hint of celery. A bit of cloying bitter-sweetness hangs around once all the other flavors have left. You definitely go on a bit of a flavor journey with this one.

You know what? After a century of closed doors and no local contemporaries to lean on, I’d say Penderyn’s done pretty well for itself with this one. There’s a bit of sharpness to the nose and the first tip-of-the-tongue taste, and there’s a mild, and slightly unpleasant, bitterness-sweetness that lingers on after you put your glass down, but all in all I’d say I’m a fan. You can do better for something in this price range, but for a piece of Welsh whisky history I see no reason not to add this one to your collection.