Nestled on the small isle of Islay off the west coast of Scotland, Kilchoman Distillery has made a name for itself since its establishment in 2005 — on an island with a rich whisky history, it was the first new one to open in 124 years. Amidst its renowned neighboring distilleries, Kilchoman has retained its independence and its claim as a true farm distillery.

Created by founder and managing director Anthony Wills and his wife Kathy, Kilchoman was built from “derelict” farm buildings out of the couple’s “passion for whisky and ambition to revive the lost traditions of farm distilling”.

As a brief digression on the passion for whisky, whether it’s for news about the distillery, opines from its team or insights into exploring the world of whisky (bourbon vs. scotch, palate development, peating, and so on), the news and blog portion of Kilchomn’s website is notably robust. At a minimum, it’s a broader-than-usual distillery-produced resource with some reads worth perusing.

Among Kilchoman’s bottlings is its grain-to-glass 100% Islay Single Malt Scotch Whisky, a single farm, single malt distilled in Scotland and the distillery’s sole expression made only from barley grown and malted on-site. Including the first release of this line in 2011, there have been eight iterations in total to-date – all with variances across age, barreling and profiles, but typically produced with a lower peating level than the distillery’s other offerings. The most recent and eight edition was released in the fall of 2018.

The Whiskey Wash has reviewed and reported on a number of Kilchoman bottlings previously. Here, I tried the 3rd Edition of its 100% Islay line, which was released in 2013. 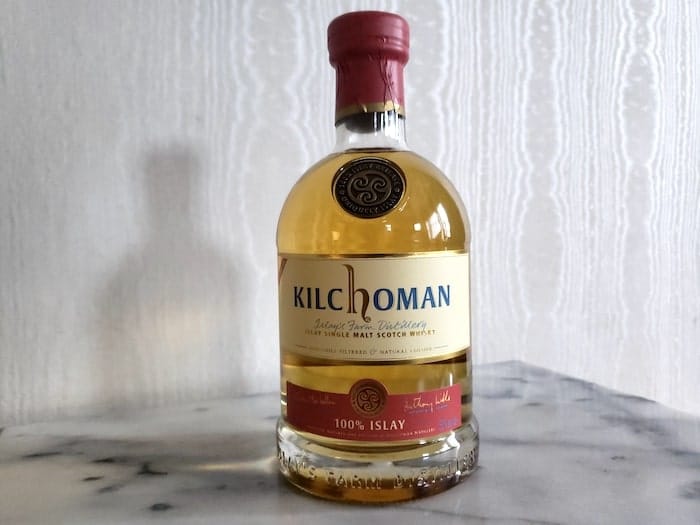 Vital Stats: The label lays out the primary stats: Islay single malt Scotch whisky, non chill filtered,  natural color. This 3rd Edition was the only single malt scotch produced in-full – from growing and malting the barley to distillation, maturing and bottling – on-site at the distillery. Matured longer than its 2nd Edition predecessor, it is a “vatting of four and five year old fresh bourbon barrels”. 10,000 bottles of this expression were produced. Bottled at 50%, a 750 mL was priced by Kilchoman at £59.95 at the time of release.

Nose: Soft earthy and fruit sweetness. Delicate burnt sage smoke and peat. Lemon and grass (not to be confused with lemongrass).

Palate: Delightfully smooth from start to finish. Nuanced but light – oh there’s peat, but it isn’t too heady or heavy, and doesn’t quash the rest. Balanced with a savory-yet-mildly-sweet note of butternut squash and pear. Salty sea air. The peat lingers gently on the tongue.

I appreciate the heft of a big scotch, but it isn’t the whiskey I reach for most regularly. This one, being on the milder side (especially compared to some other Islay single malts) yet by no means diminutive, is an easy and enjoyable sipper. Its youth does not work against it, and I preferred it neat to maximize the palate taste and feel.