Editor’s Note: This whisky was provided to us as a review sample by Johnnie Walker. This in no way, per our editorial policies, influenced the final outcome of this review. It should also be noted that by clicking the buy link towards the bottom of this review our site receives a small referral payment which helps to support, but not influence, our editorial and other costs.

Johnnie Walker needs no introduction. Their simple, colored labels and iconic “Striding Man” logo appeared on bottles of whisky worldwide well before most of us were born. The brand traces its origins to the Kilmarnock grocery shop opened by John Walker in 1820.

While it was common for grocers to keep a stock of single malt whisky, Walker found that he could achieve more consistent quality through blending. A small grocer could even cater to customers’ specific tastes by blending batches to order and by the 1850s, Walker’s name was attached to a product with growing regional popularity. When John’s son Alexander inherited the business in 1857, whisky had become the core product and Alexander spent the better part of the next three decades transforming his father’s grocery business into a global spirits firm.

The 1860s were a great time to be in the whisk(e)y business. At the beginning of the decade, legal prohibitions were relaxed on large scale blending of whiskies from various distilleries. This allowed for the growth of whisky blending as it is known today. Additionally, the construction of railways across the Isles enabled the easy transportation of goods within Britain and granted small towns access to global ports.

In the first decades of the 20th century, John Walker’s grandsons acquired major distilleries across Scotland’s whisky producing regions. The first among these, Cardhu in 1893, supplied the backbone of the red, and black label blends which were introduced in 1909 with the striding man mascot still in use today. They joined their business with the Distiller’s Company in 1925, which was acquired by Guinness in 1986. In 1997, Guinness merged with Grand Metropolitan to form today’s global spirits giant Diageo who shuttered the Kilmarnock plant in 2012 to the protestations of the local residents and government.

The Johnnie Walker Black Label has been a core offering since its introduction over a century ago. The ubiquity and accessibility of Walker’s Black label ensures that it is many new whisky drinkers’ introduction not just to Johnnie Walker’s products, but to Scotch in general. And it really is a Scotch 101 course unto itself. The blend takes advantage of the vast library of spirits available to Johnnie Walker’s master blender Emma Walker. It is blended from around 40 whiskies sourced from distilleries all across Scotland and aged at least 12 years. 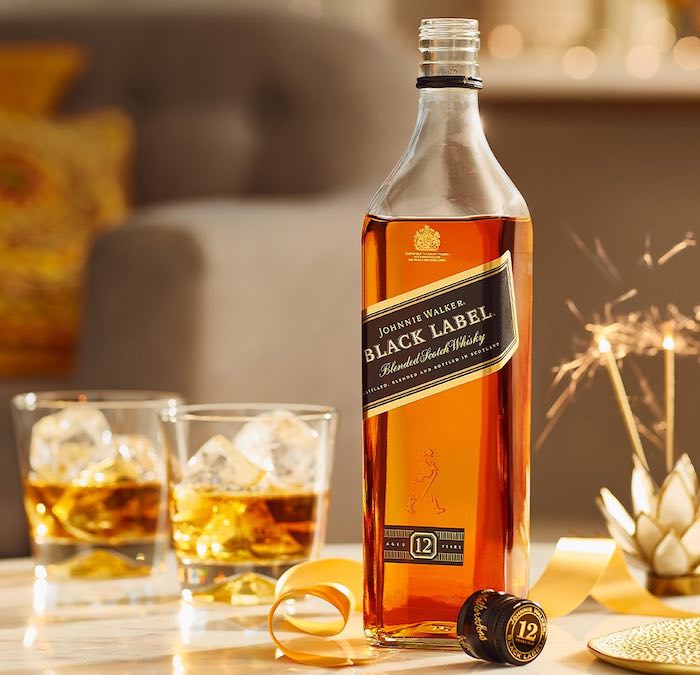 Palate: Low-proof and low-burn, there are not too many barriers to entry here. There is a strong base flavor that hits the mellow honey, stone fruit, and vanilla notes often associated with Speyside whiskies that is delicately balanced with an Islay smokiness.

The popularity of Johnnie Walker Black makes a ton of sense. It is accessible and inoffensive without completely lacking in character. It is easy to drink neat and is multifaceted enough to work in a variety of cocktails. Speaking of cocktails- after finishing my tasting glass I added seltzer to my shopping list because this will make a solid highball.

This will probably not be a seasoned Scotch drinker’s favorite dram, but if someone tells you they HATE this whisky, they’re being a snob for no reason. There is nothing whatsoever to dislike here. It’s a near perfect place to start if you are looking to get your palate around Scotch but don’t want to dive straight into single malts. If there was such a thing as a greatest hits album for Scotch, this would be it. Just like with your favorite artist’s greatest hits collection, the popular, recognizable notes lose something without the context a full album provides, but not so much that you aren’t happy to hear ‘em.