As with so many stakes in the whisky game, Hunt & Gather seeks not to distill, but to discover rare spirits that they can package and bring to the world. They’re a brand of Latitude Beverage out of Boston, who have been in the bottling and marketing scrum since 2007.

You might recognize the name ‘Latitude’ from their collaboration with pre-Prohibition O.Z. Tyler distillery, Wheel Horse Whiskey. That project revived the distillery and released a bourbon and a rye.

Latitude Beverages deals mostly in wine, with their most widespread label being the seductively named 90+ Cellars. Lacking the overhead of a traditional winery, 90+ Cellars can taste globally among producers, then bottle and offer their wines at competitive prices.

Latitude also claim to be rectifiers, though my familiarity with the term implies blending, cutting, or somehow altering a base spirit, and I see no evidence of this in their bottling rig. Perhaps that’s what you know post-NDA.

Hunt & Gather itself is rather enigmatic. Of course, this is but the sophomore debut. The Lot No. 1 barely resembles its sibling, with motorcycle-meets-Rennaissance Faire branding, though both clock in at 15 years old (Lot No. 1 is a bourbon).

The provenance of Lot No. 2 is predictably murky. What we do know is it’s from one of “western Canada’s pioneering distilleries,” and atypically has a high-corn mash bill, as opposed to favoring rye or miscellaneous grain whiskies. 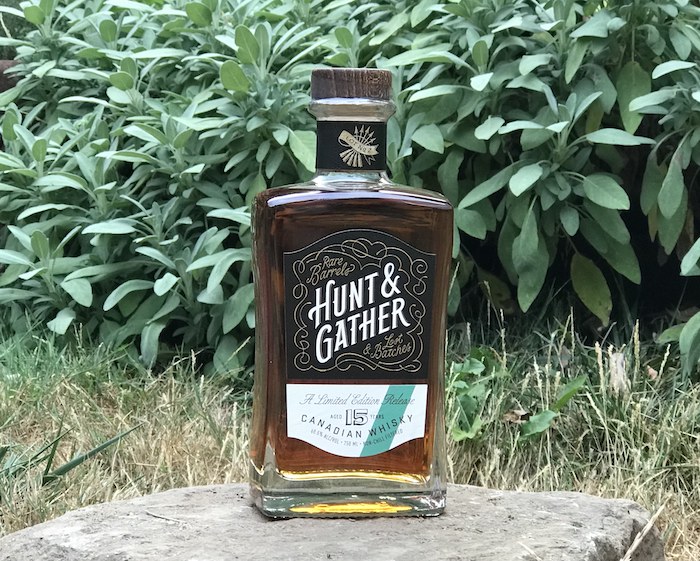 Hunt and Gather Lot No. 2 (image via Cindy Capparelli)

Vital Stats: Hunt and Gather Lot No. 2 was distilled in western Canada, aged 15 years and bottled in Rumford, Rhode Island. Its proof is 121. Find a 750mL in select markets for $69.99.

Appearance: This liquid is a very clear, medium amber that beads and slowly forms fat tears.

Nose: The aroma leaps out of the glass, riding a wave of ethanol. Eventually I perceive lots of raw coconut, a little caramel sauce, and peach skin. White flowers flutter deep down.

Palate: The proof has me shaking my head like a teetotaler. Significant bite. I have to cut it by half with water before I can make anything out. Clove comes through on the attack with vanilla extract, brown sugar and apricot appearing on the mid-palate. This experience is syrupy without a ton of complexity. Tannic bitterness stretches on a lengthy finish.

I've tasted a lot of over-proof whiskies and nothing has quite nullified my palate like this one. It'd be cool if there was something interesting to be found underneath all the alcohol, but this one said "no." The hunt ought to continue.