Editor’s Note: This whiskey was provided to us as a review sample by Impex Beverages. This in no way, per our editorial policies, influenced the final outcome of this review.

When thinking about alcohol from Belgium, what probably comes to mind is beer, or maybe even genever. The history and traditions of alcohol in the region run deep. Take the case of Het Anker brewery, which has been brewing beer in Belgium in a small town called Mechelen for five generations. In addition to beer, their family used to make jenever, also known as genever, a spirit similar to Scotch that doesn’t require aging. Jenever is also a distilled malted spirit at its base, and has roots in the Netherlands in the 1500’s.

Het Anker’s family hasn’t been making beer for quite that long, but they do find much of their inspiration from the rich history of the region and their family. Now the brewery is making their own mark on history by fostering a space in Belgium where distillers can explore whisky in creative, uniquely Belgian ways.

Making a single malt was a logical first step into producing whisky for the brewery, as they were already an expert with working with malts. Their Gouden Carolus Belgian Tripel beer, from which the subject of this review gets its name, is used as a base for the whisky because it’s malty and uses Belgian yeast that the country is famous for.

To make the signature whisky, they begin by taking the same steps they would take to make their Belgian Tripel, but instead of brewing, it gets distilled. The company says the connection between the beer, whisky and their family history is a big reason why they won’t produce any gin or rum.

In another interesting twist with this whisky, it is matured initially in first-fill bourbon casks. It is then finished in ‘Het Anker’ casks – ex-wine casks which are scraped and charred by a cooper according to the distillery’s own formula.

Right now there are only two major players on the Belgian whisky-making scene, but global interest in Belgian whisky is growing. Launched in November 2013, Het Anker has ensured Gouden Carolus Belgian Single Malt is widely available since their first production so everyone can experience Belgian whisky. 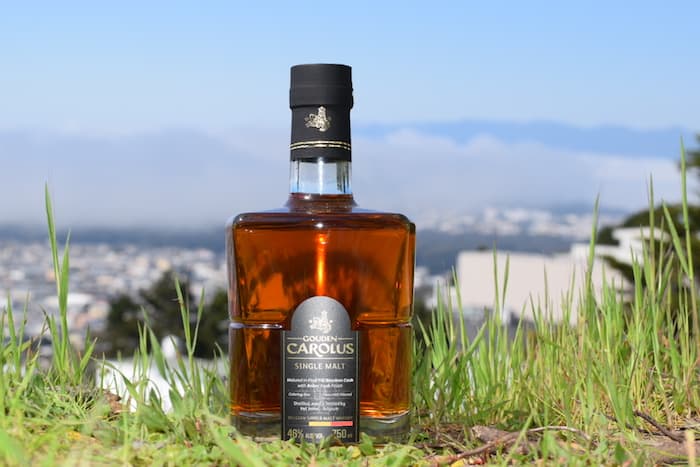 Vital Stats: Gouden Carolus Single Malt is first aged in first fill bourbon casks and gets a second aging in ‘Anker’ casks: oak casks “reworked” according to the distillery’s design with a cooper. Price point is around $60 per bottle. It’s 45% abv, with a mash bill of 100% malted barley.

Appearance: The word Gouden means golden in Dutch, which is exactly the color of this spirit. A kind of light and bouncy golden, like sunshine.

Palate: It’s got light flavors, still sweet and light almost exactly as it smells. On the front, light grapefruit flavors pick up into lemongrass, followed by the bitterness of orange peels and leather, anise and copper. The funk from the Belgian yeast comes in on the finish to round out the sweetness and balance the bitterness. Its sweet from beginning to end, with all the other flavors coming in three distinct waves.

Gouden Carolus Single Malt Whisky has a distinctly Belgian funk. I like the sweetness and it's a really smooth sipper. The bitterness can be a little overpowering, but it is overall pretty balanced and tasty from start to finish.