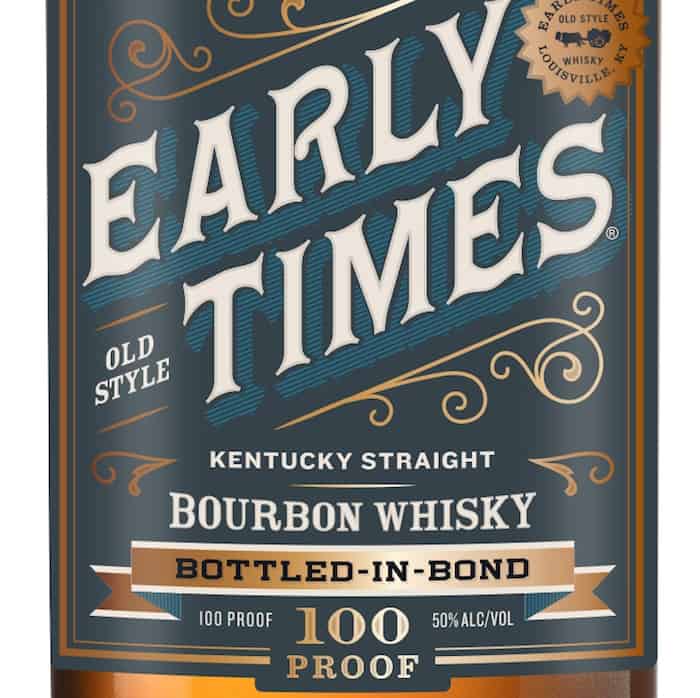 Vital Stats: As with all bottled-in-bond bourbons, this bourbon aged at least four years in new charred oak barrels, and Brown Forman proofed the bourbon to 100 proof. The mash bill includes 79% corn, 11% rye, and 10% malted barley. Currently, a limited distribution plan may make this bourbon a bit tough to find (Kentucky, Ohio, Indiana, Illinois, Michigan, and Oregon). This bourbon retails for about $23 for a one-liter bottle.

Appearance: At four-years-old and 100 proof, bonded Early Times appears a medium copper in the glass. Certainly not in the league of barrel-proof bourbons, but also not as light as many craft bourbons hitting the shelves.

Nose: Freshly poured, baking spice notes dominate the nose. However, after a few minutes in the glass, the nose lightens up quite a bit, and soft notes of caramel, oak, and citrus mesh, resulting in a balanced and pleasant nose.

Palate: The front of the palate leads off with light caramel notes balanced with slightly tangy dark fruit notes. The simple sweetness of the front carries through to the mid palate, but the fruit notes are replaced by light oak and cinnamon. The finish turns slightly earthy and bitter before some of the spice notes return for a light warming sensation.

Early Times Bottled-in-Bond delivers a nice experience. In the times of $100+ limited edition bourbons, it can be quite difficult to get excited about a four-year-old bonded bourbon priced at around $23. However, Brown Forman played this one right by releasing a reasonably priced Early Times bourbon. As it stands, this bourbon compares favorably in price and flavor to my other favorite of the Brown-Forman line, Old Forester Signature, while offering a slightly different experience – Early Times bonded is sweeter with more oak influence to it than Old Forester Signature.

So, the next time you’re at the store and reaching for the old standby, Old Forester Signature, change it up a bit and grab the Early Times Bottled-in-Bond for a different experience.