Like most whiskey stories in America, this one begins with a Beam.

Jack Beam was Jim Beam’s uncle. They must have been close, because Uncle Jack was best man at Jim’s wedding. Like his older brothers, Joe and Dave, Jack started out at their dad’s distillery in Nelson County. As soon as he turned 21 he broke away to start his own place. He called it ‘Early Times.’

The name was Jack’s way of saying he did things the old-fashioned way. He didn’t, not really. His Early Times was a new, modern distillery with that all-important feature in that period: rail access.

Railroads were changing whiskey-making. The business had already begun to move away from its agricultural origins. It was becoming an industry, in which producers bought corn and other grains, and processed them into whiskey. Trains accelerated the change by making it easier to get raw materials in and whiskey out. That is why Jack Beam and most other Kentucky distillers were locating along the new railroad lines. Distilleries were becoming bigger, more modern, and more efficient, while trying to portray themselves as ancient and unchanging.

Whiskey is still marketed that way. 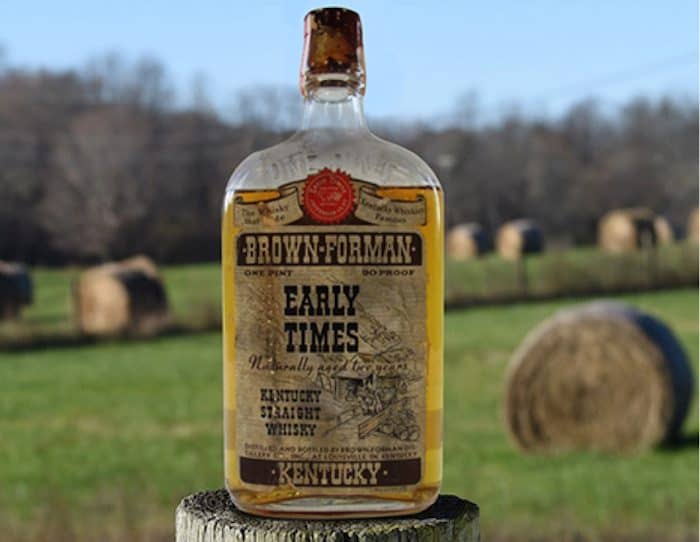 An old bottle of Early Times (image via Brown-Forman)

Jack and his son, Ed, ran the place until they both died, a few months apart, in 1915. Jack only had the one child and Ed had none, so ownership went outside the family. The distillery closed for good with Prohibition, but with barreled whiskey still in its warehouses. Brown-Forman bought the whiskey to be sold ‘for medicinal purposes,’ which Brown-Forman had a license to do. The whiskey was moved from Early Times Station (near Bardstown) to Brown-Forman’s warehouses in Louisville.

Production of Early Times resumed after Prohibition, at the distillery that also made Brown-Forman’s flagship bourbon, Old Forester. They have different mash-bills. The Early Times recipe uses more corn (79%), and less rye (11%). This creates a sweeter, milder, and less spicy whiskey, which became the preferred style after World War II. It also costs less to make.

By 1953, Early Times was the best-selling bourbon in America. That’s right, bourbon. Early Times was Kentucky Straight Bourbon Whiskey in those days. Today it is ‘Old Style Kentucky Whisky,’ a descriptor Brown-Forman came up with in 1983 when it decided to cut costs by aging about 20 percent of the whiskey intended for Early Times in used, rather than new, barrels. That meant it could no longer be called bourbon, it is just ‘whiskey’ as far as government regulators are concerned.

The company at least wanted ‘Kentucky’ on the label, so it came up with ‘Old Style Kentucky Whisky.’ (Spelled without the ‘e’ because of the Brown family’s Scottish origins. It is spelled ‘whisky’ on the Old Forester label too.)

Early Times sells to a consumer who is very price-sensitive. The brand continues to be popular, but nobody talks about it on social media. Brown-Forman doesn’t spend very much to market it. There are no limited releases. It is rarely seen on the clandestine secondary market.

Despite not being bourbon, Early Times doesn’t taste significantly different from bourbons at its price point. It is sold at three years old and 80° proof (40% ABV).

Outside the U.S., Early Times is bourbon. Everything about it is the same except, export bottles don’t contain any used-barrel whiskey. The ‘Kentucky whisky’ product is sold only in the U.S.

A few years ago, Brown-Forman tried to reintroduce Early Times bourbon into the U.S. by creating a line extension called Early Times 354 (the distillery’s DSP number). It bombed and was discontinued.

One of the oldest bourbon brands, Early Times is in its 157th year. Except during an eight-year period between them, it has been owned by either the Beams or the Browns, two of bourbon’s oldest and most esteemed families. Early Times Kentucky Whisky is as drinkable as any other young, low-proof whiskey. If you like that sort of thing, it might be the sort of thing you would like. You should at least try it, if only out of respect for its lineage.

129
Shares
5.1k
Views
Share on FacebookShare on TwitterGet Our Newsletter
Get The Glenlivet 18 Year Old at ReserveBar. Shop now!