Entirely by accident, I stumbled across the feature-length documentary “Scotch: A Golden Dram” on Amazon Prime a year or two ago. A central thread in the film revolved around Bruichladdich’s master distiller, Jim McEwan, who was nearing retirement after 52 years in the business. (He ultimately did call it a career with Bruichladdich in 2015, only to come out of retirement with startup Ardnahoe Distillery in 2017.)

When I first saw the documentary, I had never tried any Bruichladdich whiskies. But McEwan’s story, and the passion with which he spoke about Scotch, made me want to find some. It didn’t take long. I quickly located The Classic Laddie at a whiskey bar near my office, and then talked my brother into pouring some of his Port Charlotte 10 Heavily Peated. I enjoyed both.

The distillery’s Black Art series, though, is something altogether different – and unique.

Harkening back to 1994, the Black Art Edition 08.1 arrives with an air of mystery. It was distilled as an unpeated Islay single malt and matured for 26 years in casks that Bruichladdich won’t disclose.

Bruichladdich was owned by Jim Beam in ’94, when the then-American company shuttered the distillery and kept on a skeleton staff of two people to oversee the more than 250,000 gallons of whisky aging in the warehouse. That was the status quo until 2000, when an investor group led by Mark Reynier bought it with the intent of reopening it as an Islay distiller, which eventually happened starting in 2001.

Black Art Edition 08.1 is the final whiskey put into barrels under Beam ownership. Despite being released at cask strength, it arrives at only 90.2 proof. That suggests a whisky aged in cool conditions typical of the Scottish Inner Hebrides islands, slowly diminishing the alcohol content over time.

Part of the fun when it comes to drinking from the Black Art series is trying to figure out the rest. Head distiller Adam Hannett must enjoy reading everyone’s theories about his whisky. He knows what the rest of us are only guessing about.

If that’s the point, then, let’s get on with the guessing. In the tasting notes below, I’ll take a crack at Bruichladdich’s latest expression. 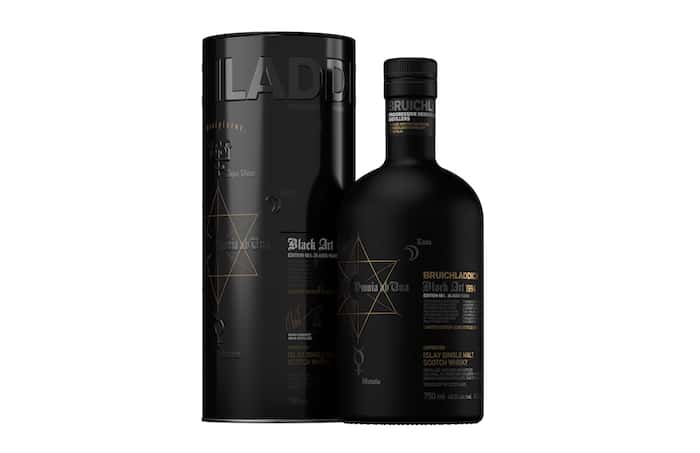 Appearance: Dark-ish copper. The bottle holding it is also dark-ish – black and featuring a hexagram. You won’t confuse it with anything else on your shelf.

Nose: For a release that’s all about the barrel aging, the nose on this Black Art expression is remarkably straight-ahead Scotch. It has the sea salt you expect from an Islay, but it’s also sweet and a little fruity. I smell caramel, orange peel and tobacco leaf. It does not have any of the smoky essence you often find in Islay Scotches – this is where its unpeated nature reveals itself.

Palate: Lighter and more approachable than previous Black Art expressions, which is not to say it isn’t full-bodied Scotch. Twenty-six years in what I presume is recycled Jim Beam bourbon barrels creates a light oaky sweetness. Vanilla beans, caramel and maple syrup. But there’s also a fruit-forward zestiness going on that’s more surprising. Orange marmalade, plums and dark cherries. The finish is warm and long, going gentle into that goodnight.

I graduated from college in 1994; seems like a lifetime ago. So it was with a special relish that I cracked open whisky that went into a barrel that same lifetime ago. I only wish I had aged so well.

For a whisky release built around mystery barrels, I don’t taste obvious signs of exotic cask finishing. This tastes like quality Scotch put into used bourbon barrels a quarter of a century ago and allowed to mellow nicely. If there are sherry or port or brandy casks involved here, I’m not able to identify them.

Jim Beam also owned the Isle of Jura Distillery in the 1990s, which is not far from Bruichladdich. It wouldn’t be surprising if Beam shared personnel and barrels between the two distilleries. Jura is known for mellower, more delicate Scotches than its Islay neighbor. It’s possible that influence might be what you taste in Black Art Edition 08.1 – although in that case, you’d expect it to be translated to the other Black Art expressions.

Whatever the influence, this is good Scotch. I won’t try to answer whether it’s worth the price tag; that’s a personal decision for the buyer. I’m here to tell you it’s high-quality whisky, and I’d be happy to pour it for fellow Scotch enthusiasts any time.