Editor’s Note: This whisky was provided to us as a review sample by Brenne. This in no way, per our editorial policies, influenced the final outcome of this review. It should also be noted that by clicking the buy link towards the bottom of this review our site receives a small referral payment which helps to support, but not influence, our editorial and other costs.

Terroir is a feeling of place and in both smell and taste. Allison Parc founder of Brenne, former ballerina turned whisky entrepreneur, wanted to show that terroir was possible with a single malt whisky. With the help of a cognac maker, she developed the spirit from seed.

Brenne French Single Malt Whisky is a wonderful addition to the ever expanding whisky region in France. The first expression of Brenne debuted in 2012 in New York City – with Parc distributing it on bicycle to stores and bars – and it sold out in two months. She’s been expanding ever since to hit every major market and select cities in the US.

What sets Breene apart from many other whiskies are the ingredients. Everything is locally sourced, 100 percent organic and non-GMO. There are two types of heirloom barley used and grown in Cognac, France.  The yeast strain is proprietary and has been in the distiller’s family for generations. The water to cut the proof is from the nearby Charente River. The whiskey is twice-distilled in an alembic Charente still at a family farm-distillery in the heart of Cognac region.

Perhaps the most unique addition to terroir is the barrels. Brenne uses new French Limousin Oak and Cognac casks, “proudly the first single malt in the world to be aged exclusively in these two barrels.” 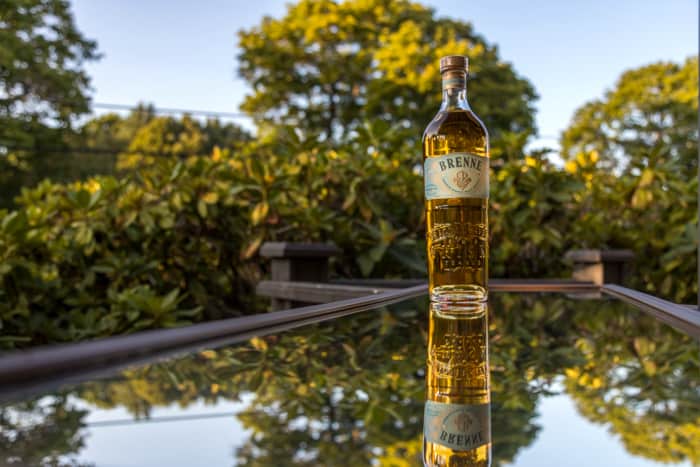 Palate: The whisky is very smooth going down. It’s both floral and sweet. There are hints of caramel apple, butterscotch candy, chamomile and a little lemon. There’s a medium mouthfeel that lingers like a syrup or hard candy. It’s very creamy and hits the spot for an after dinner drink.

Overall this is a great sipping whisky that's sweet like dessert or a high end lollipop. It might have you dreaming of a French bakery shop or creme brulee. The flavors of hibiscus and butterscotch linger on your tongue in the most pleasant way imaginable. While sipping, you might even be dreaming of wandering the streets and castles in Cognac, France. Brenne French Single Malt Whisky could go well in cocktails as a substitute for chartreuse.