Editor’s Note: These whiskeys were provided to us as review samples by Peg Leg. This in no way, per our editorial policies, influenced the final outcome of this review. It should also be noted that by clicking the buy links in this article our site receives a small referral payment which helps to support, but not influence, our editorial and other costs.

When it comes to bourbon, there is a definite association with BBQ. There’s a certain romance to it. There’s something to be said about some fresh pulled pork or brisket paired with a bit of whiskey. There’s probably some potato salad and deviled eggs thrown onto the table as well.

This story began in 2013 in Nashville, Tennessee. Carey and Delaniah Bringle open up a BBQ spot by the name of Peg Leg Porker and over the years have won over fans with much acclaim. In fact, owner and pitmaster Carey has been asked to cook for the James Beard House a couple of times, which is something to be said. On the menu at the Porker, you’ll find all of the classic items to expect, from pimento cheese with crackers to ribs. I’ll admit, looking at the website, I got a hankering for some pulled pork.

Bringle blended his first lot of Peg Leg Porker Straight Tennessee Bourbon from 25 barrels to produce around 1,000 six-pack cases of 90 proof spirit, a proof level “of bourbon lovers’ bourbons, so that’s where we went with it.” But that was simply the beginning. Bringle has continued to innovate his process with the use of hickory charcoal filtration.

“I’ve never had a smoked liquor that I thought really worked,” said Bringle to us in an interview a few years back. “But hickory is an important part of barbecue cooking. I thought about just adding hickory staves to the barrels, but we began to experiment with filtering the whiskey through a column of charcoal and then running it through a sock filter to remove any impurities.”

This is different from the traditional Lincoln County process that sets Tennessee Whiskey apart from bourbon. In Bringle’s process, filtration occurs after aging and prior bottling. At Jack Daniel’s and George Dickel, whiskey flows off the still and through charcoal before aging. Plus, Bringle’s use of hickory differentiates the product from the sugar maple charcoal required by the Tennessee whiskey definition.

In the past we’ve reviewed Peg Leg’s 8 and 12 year expressions. Here we review the non-age statement and a 15 year old. 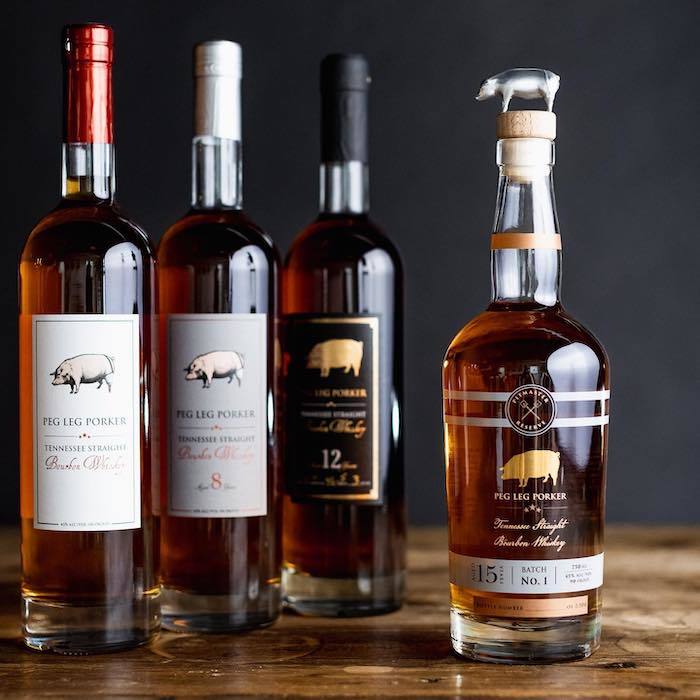 Appearance: A lighter shade of orange or perhaps bronze. In the glass, there were several legs, though slow to start.

Nose: In the beginning, it was all about the citrus. There’s a bit of heat for a moment, but nothing to be afraid of. After a moment’s pause, I picked up a touch of toffee mixed with leather.

Palate: Once more, citrus is at the forefront, though with an accent of spice. It had a lighter body, but there was a moment of caramel in the middle. With the addition of a touch of water, discovered more of the sweeter elements.

Final Thoughts: This was a solid sipper, though was hoping for a bit more depth to the experience. Perhaps a bit more richness or higher proof. That said, I’m pretty sure it would pair well with some Tennessee style BBQ.

Appearance: Against the light, I saw tones of a burnt orange. However, there was also a brightness to it. I suppose it’s one of those in betweens. Overall, this looked a bit light for a 15 year.

Nose: Very bright with notes of citrus. And yet there’s a bit of robust quality, especially among the sweeter elements.

Palate: This was pretty simple. Certainly lighter bodied, but with a healthy amount of citrus throughout. Upon the second taste, there was a touch of pepper as well as a definite richness to the whiskey.

Final Thoughts:  The extra aging on this one gave a markedly different tasting experience. It had more going on and had a pronounced sense of balance. I was curious as to what the hickory charcoal filtering process might lend to the flavor profile and in this one, was able to pick up some smoke from the whiskey. However, for the price point, I’d ideally have a pour at the bar first and then consider buying the bottle.