Editor’s Note: These whiskeys were provided to us as review samples by Peg Leg Porker. This in no way, per our editorial policies, influenced the final outcome of this review.

We have previously spent time on this website interviewing Carey Bringle, the man behind Peg Leg Porker, a Nashville BBQ restaurant as well as Peg Leg bourbon. He’s been a competitive barbeque cooker (barbequist?), restaurant owner, smoker designer, and QVC television star. So of course, his Peg Leg whiskey would be held to the same high-achieving standards, right?

Bringle’s BBQ background (say that three times fast) comes into play in how this whiskey is filtered: It gets filtered through hickory charcoal he had burned down in the same smoker where he cooks whole hogs. And instead of the traditional Lincoln County process (think Jack Daniel’s or George Dickel), in which the whiskey is filtered through charcoal before aging, Peg Leg gets filtered after aging and before bottling. Also, Peg Leg uses hickory charcoal instead of the traditional Lincoln County sugar maple.

The 8-year has been out for several years and the recently released 12-year old, as we put it, follows on [its] heels. This latest bottling was sourced from an undisclosed distillery (some say Dickel) and aged (duh) 12 years in new charred oak barrels. 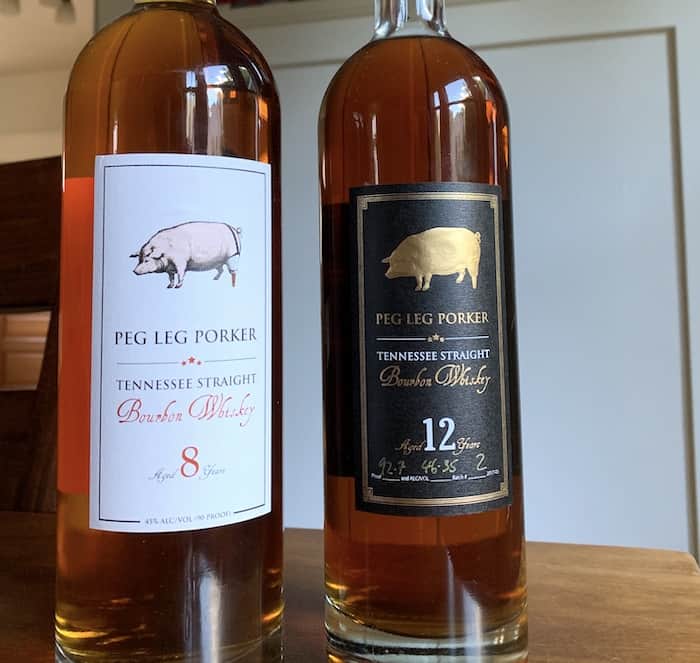 Appearance: Gold mixed with green, like the green of tarnished copper, though this is more golden than coppery. It’s brown and cherry wood in the bottle but quite gold in the glass. A wild grass.

Nose: It packs a punch. But there’s richness. The smoky process by which this is made comes out in the nose. I’m sure thinking BBQ, and also a ghost of vinegar and pepper. And at the end: vanilla, and paper—manila paper, actually.

Palate: This is smoky! Not peaty, though. My friends who dislike “burn-y” whiskies wouldn’t get near this. But I like it. It’s fiery, smoky, and not messing around. This could be a pre-BBQ sipper, no problem. I like how this is smoky without being peaty. At the end there is a touch of caramel, but you really have to wait for it. It’s actually a little bacony. I hate bacon. (Yes I know I am supposedly broken inside but it’s just gross.)

Final Thoughts: I like this whiskey. Be warned: It’s hot. It’s 90 proof and tasted higher. I wouldn’t give this to someone if it’s their first go of bourbon. It’s a little weird. But I think seasoned whiskey drinkers who enjoy a quality product would dig this.

Appearance: Richer in the glass than the 8-year, though their color in the bottle looks almost identical. A little more copper and a little less green/gold.

Nose: More complex and sweeter than the 8-year. There’s a lot going on here–but it all works. Old school gumball machine gumballs, the kind with the really hard sugar exterior and ragged rough gum inside you had to chew with great big jaw motions. Caramel. Paper again. Chips Ahoy cookies. And banana. It is definitely not as smoky—is that the longer aging process? But it gets filtered after aging, so…?

Palate: Smokier on the palate than on the nose. It has some spiciness and chew, like a rye, but it’s not hot. I want to sip this. Don’t put in in a drink. Have it neat. Because it is neat.

Final Thoughts: It’s more well-balanced than the 8-year. And I want to hoard it. I’m not sure if you can get your hands on it, but I’d recommend you try. I like the 8-year very much, but I’m crushing on its older brother pretty hard.

63
Shares
12.2k
Views
Share on FacebookShare on TwitterGet Our Newsletter
Get The Macallan® Rare Cask at ReserveBar. Shop now!