Editor’s Note: These whiskeys were provided to us as review samples by Old Elk Distillery. This in no way, per our editorial policies, influenced the final outcome of this review. It should also be noted that by clicking the buy links towards the bottom of this review our site receives a small referral payment which helps to support, but not influence, our editorial and other costs.

Greg Metze was on the verge of graduation from University of Cincinnati in the spring of 1978, unsure what to do with the rest of his life, when he happened upon a campus job fair. One of the companies there was Seagram’s, the world’s largest producer and distributor of distilled spirits. He had no idea what somebody with a chemical engineering degree might do at a booze company, but he was willing to find out.

“The only thing I really knew is that I was 23 years old, and I was going to work for a whiskey company,” Metze says. “That was pretty darn cool.”

The Seagram’s liquor business eventually went to Pernod Ricard, which went to LDI, which went to Diageo, which eventually went to MGP. By that point the master distiller at MGP, Metze found himself overseeing whiskey-making at the largest contract distiller in the United States. But it was the Seagram’s approach – and mashbills – that Metze learned from the beginning that continued to define how he approached the work.

“I was producing many products for many brands, but those products were all based on five Seagram’s mashbills,” he says. “Seagram’s was progressive, and pioneered a lot of the techniques widely in use today. Working there turned out to be the best training in the world, as for becoming a master distiller.”

At MGP, some brands would buy un-aged, raw whiskey and finish it or blend it themselves. Others were happy to take MGP-aged whiskies and just slap their own labels on it. Regardless, Metze was making the same five mashbills he knew well, going back decades. Once the juice left his hands, he largely lost track with what brands all over the country were doing with it.

Then along came Curt Richardson. The founder and longtime CEO of Otter Products, maker of OtterBox phone covers, Richardson in 2013 wanted to start a new distillery in his hometown of Fort Collins. He didn’t have a production facility of his own yet, but didn’t want the standard MGP mashbills, either.

“That,” says Metze, “was the first time in my career I had the opportunity to build mashbills from the ground up.”

Metze ultimately created custom bourbon, wheated bourbon and straight wheat mashbills for Old Elk. Richardson loved the results, and figured he should just hire away the MGP master distiller to keep it going.

These days, Old Elk is building a full-scale distillery in Fort Collins but in the meantime still leaning on whiskeys sourced from MGP that were made when Metze was still there. Three are based on the custom mashbills he developed for them, and the fourth – a straight rye – is one of the MGP mashbills he especially loved to make while there.

Metze’s signature now appears on every bottle from Old Elk, and he says he’s excited about the future as he was when he walked out of University of Cincinnati back in 1978.

“We’re going to be more than a run-of-the-mill distillery fighting for space on the shelf,” he says. “As people try our products and see the quality, I think we’re going to be a big, big deal.” 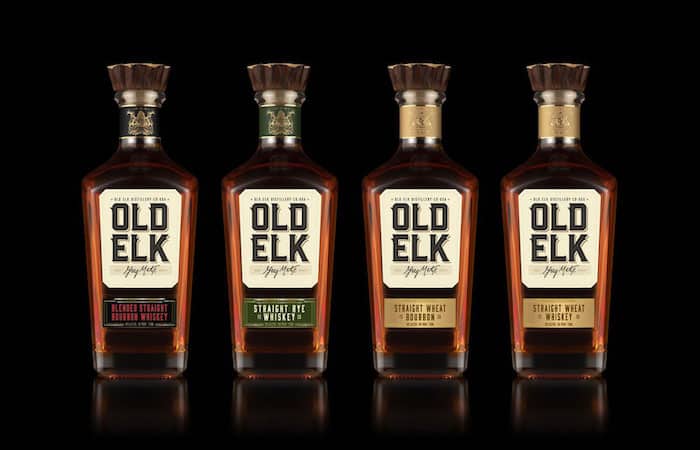 Nose: Despite the low percentage of corn in the mashbill, this brings to mind traditional, straight-up bourbon. It’s light, sweet and pleasant. When you bury your nose in the glass, you quickly discover caramel, vanilla and honey.

Palate: This is an easy-going whiskey. Taking a drink is like shaking hands with an old friend. The low alcohol content means it’s not boozy, and the flavors develop slowly. Brown sugar and tobacco eventually reveal themselves, along with hints of creamy, high-cacao chocolate.

Final Thoughts: When Richardson first met with Metze and they talked about a flagship bourbon, the details were limited. “They said ‘we want smooth and easy.’ That was literally the end of the meeting,” Metze says. To make that happen, Metze says he knew he had to get the malted barley content high. He also knew he wanted some degree of rye to bring spiciness to the flavor profile, and that it typically takes at least 15% before you can really taste it. To make room for all that, he took the corn to the absolute minimum of 51%. “If I’d had more room for malted barley, I’d have taken it,” he says.

Regardless, he calls the resulting whiskey “different from anything else you can find on the shelf.” I’d call it mission accomplished as far as smooth and easy goes. This is an approachable – and affordable – sipper if there ever was one. Old Elk is required to label it as a “blended bourbon” at the moment, because the MGP sourcing includes facilities in three states.

Nose: The traditional bourbon smells are relatively muted in this case, rounded off by the high wheat content. I get amaretto, molasses and toffee.

Final Thoughts: Old Elk wasn’t messing around with this mashbill. “Most wheated bourbons are in the neighborhood of 20% wheat,” Metze says. “Ours is 51% corn, and 40% wheat.” Wheat, like rye, can be tricky to distill at very high percentages. Fortunately, Metze has been working with rye for decades. Probably the most exciting mashbills Metze is working on at Old Elk are the ones involving wheat.

Personally, I could use a little more traditional bourbon flavor in this one. But Metze isn’t wrong that it’s unlike anything else you’re likely to have on your shelf. And it’s certainly easy to drink. It’ll be fun to see where Old Elk takes it in the years ahead.

Nose: Honeysuckle, roasted nuts, vanilla caramel candies. Surprisingly sweet. Definitely not as sharp and spicy as you expect with a mashbill of 95% rye.

Final Thoughts: “The rye has always been one of my favorites,” Metze says of the whiskies he made at Seagram’s and, later, MGP. The Old Elk flagship bourbon clearly includes an element of rye, but the straight rye really shows Metze’s propensity for working with the grain. This is a quality, easy-drinking whiskey – exactly what you’d expect from a man who’s been making it for decades.

If I had a hesitation, it would be about the price point. This is quite a bit more expensive than the other Old Elk whiskies, and the only one that isn’t a mashbill unique to them.

Nose: Sweet and plummy; not necessarily what I expected. There’s honey here, too. Beneath all that, though, I eventually discovered Nabisco Wheat Thins and vanilla pound cake.

Palate: A little warmer and spicier up front than I would have guessed, given the sweet nose and high wheat content. It mellows quickly, though, and sticks around for a surprisingly long finish. Unfortunately, there’s not as much there there as I would’ve preferred, and no strong flavors assert themselves. I did taste butter, creamy caramel and charred vanilla. It’s all nice – I’d just like more of it.

Final Thoughts: “Most other wheat whiskies are 51% wheat and maybe one-third cereal grain,” Metze says. “Our mashbill, we wanted to be the real McCoy. We took it all the way.” He’s not wrong. As a whiskey geek, this is super-interesting juice. I just wish I liked it more. Regardless, I’m curious to see where someone of Metze’s talent can take this, and how it will develop in the years ahead.