Editor’s Note: These whiskeys were provided to us as review samples by Hudson Whiskey. This in no way, per our editorial policies, influenced the final outcome of this review. It should also be noted that by clicking the buy links towards the bottom of this review our site receives a small referral payment which helps to support, but not influence, our editorial and other costs.

Hudson Whiskey is back with a very slick rebrand, inspired by the typography and colors of the New York Subway system. The marketing really hammers home one thing:  This. Was. Made. In. New. York. I am also New York-made, so I might be especially susceptible to this aesthetic choice.

Now, despite this deeply urban look, the whiskeys of Hudson Whiskeys are still produced Upstate, in the small town of Gardiner, just south of New Paltz and west of Poughkeepsie, at Tuthilltown Spirits. It’s helpful to look at a few pieces of Tuthilltown’s timeline: 2003, Ralph Erenzo founds this, the first Post-Prohibition New York State distillery; 2010, William Grant & Sons, Inc. siphons just the Hudson Whiskey brand from Tuthilltown; 2017, WGS scoops up the entire distillery.

In between these seven-year landmarks, Tuthilltown Spirits got quite a bit done. Erenzo was a key lobbyist to the New York legislature on the subject of the 2007 Farm Distillery Act (more about that in a moment), Hudson Whiskey was a cornerstone brand of the Empire Rye designation, and the whiskey evolved from young spirits barely rested in tiny barrels to fully fleged, grown-up bourbon and rye.

The aforementioned Act created the Farm Distillery License, which allows for the production of 75,000 gallons of spirits, as long as they’re made from 75% New York State ingredients. That distiller may then sell its liquor and any other New York State labeled products (beer, cider, wine, mead, or liquor) on-premise and to go. The license is significantly cheaper than a standard Micro Distiller’s License. A farm distillery doesn’t even need to be located on a farm!

I mentioned that I’m from NY, and now I’ll tell you I’m Upstate, too. So I know intimately the effect this law has had on the once-foggy fortunes of all those counties outside the five boroughs everyone thinks of as “New York.” It’s been a game changer, not only bringing in distillery and tax revenue, but also rejuvenating the towns of the north.

If nothing else, I’ll raise a glass to Hudson Whiskey for that. 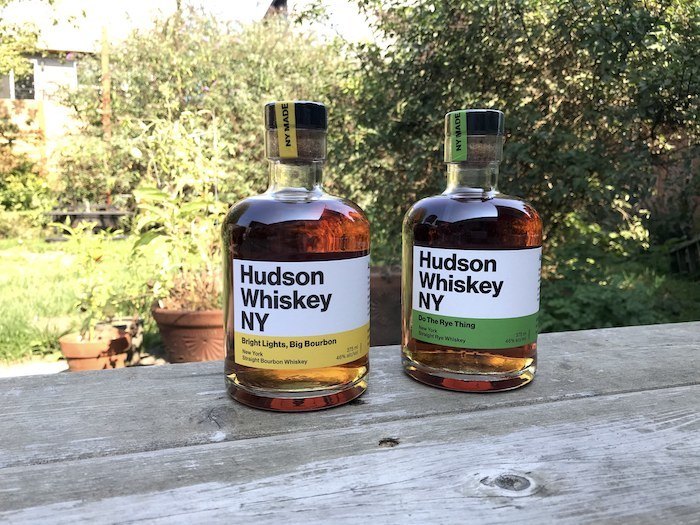 Nose: Most noticeably, the nose is fresh cut 2″x4″ underlain by lots of brown sugar and apple cider with wafts of smoked meat, somehow latex and cacao nibs.

Palate: Salted vanilla caramel on the palate, it’s smooth with a kick at the end. Some herbal bitterness on the back palate and the sweetness of everything else make it richer than the nose belies.

Appearance: Do The Rye Thing shows a very clear, medium pale copper with a bit more depth than the bourbon. It beads and slowly forms medium tears.

Palate: Dill makes it here, too, lots of it. Somehow that doesn’t clash with the peanut brittle and dark chocolate also present. The mouthfeel is silkier than the bourbon with white flowers on the finish.

Final Thoughts: These samples came in a big, fancy box decorated with swag. Accordingly, I expected not to like them. The Empire State got me, though, and I think they are worth the effort to find and sip. If this is what Hudson Whiskey’s new identity tastes like, I’m in.