New York Based Hudson Whiskey Gets A Modern Make Over

In 2003, one Ralph Erenzo had an idea to move to Upstate New York and start a distillery. At the time he founded what is today known as Hudson Whiskey he was a pioneer in the craft distilling movement, particularly in his state where he was aiming to be the first to make whiskey there since Prohibition. The dream was a success, leading to eventual complete acquisition by Scotch whisky outfit William Grant & Sons in 2017 (they had acquired the Hudson Whiskey brand in 2010).

Now, in a move to give the brand a more “bold” future, the look and feel of what is Hudson Whiskey has evolved, while also featuring “more mature liquid.” To this end, according to those behind it, “the result is a reinvention of Baby Bourbon to Bright Lights, Big Bourbon and Manhattan Rye to Do The Rye Thing. As a yearly limited edition release, Maple Cask Rye is now Short Stack and an exciting innovation with a one-time release, Back Room Deal is a straight rye whiskey finished in peated Scotch barrels.” 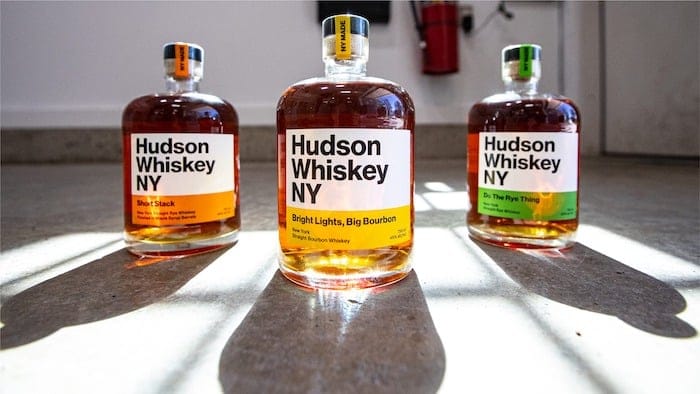 In addition, there are plans “to experiment with older age statements to release additional innovations in the near future.”

“My career began in the culinary arts after graduating from The Culinary Institute of America, so I value the fact that great products begin with great ingredients,” said Brendan O’Rourke, Chief Distiller and Operations Manager of Hudson Whiskey, in a prepared statement. “As a born and bred New Yorker, it is important to me to showcase the hard work from our local family farmers.  These grains form the backbone of Hudson Whiskey and we are proud to work alongside our neighbors as our brand continues to grow.

“As the liquid inside of the bottle has evolved, it was fitting to update the packaging as well. The inspiration came from our love of the great state of New York and the people who make it unique.”

With regards to O’Rourke’s reference to updating the packaging, what’s been noted around this is that it it now “captures the classic and dynamic essence of New York. The new packaging is inspired by the New York subway system with black and white blocking and bold, vibrant colors for each variant that convey a sense of place.

“The new variant names reflect New York attitude and embrace the kind of characters, places and moments that only exist in New York.”

Below you’ll find some more official specifics on each of the expressions referenced above.