Editor’s Note: This whiskey was provided to us as a review sample by Wigle. This in no way, per our editorial policies, influenced the final outcome of this review.

The story of the Wigle Distillery began in 2011 in Pittsburgh, Pennsylvania and is a family run distillery. When it comes to the name, it is an ode to Philip Wigle, whom was a pioneer in the Whiskey Rebellion around 1790, as he had a difference of opinion with tax collectors in regards to the production of spirits. As they say, Pennsylvania is the home of rye whiskey, and there have certainly been some favorites from the area.

The Wigle Single Barrel American Whiskey is a bit of a different beast. The mash bill consists of 80% wheat and 20% malted barley. When it comes to this particular bottling, this is the second batch, and is an extremely limited edition, as there were only 98 bottles produced.

As a distillery being a decade in operation, Wigle has quite the portfolio. While the flagships are a variety of rye whiskeys, their book has branched out considerably. Among the selections are flavored whiskeys, bourbon, gin, liqueurs, an amaro, and others. They’ve also done pretty well for themselves, having won several awards from the American Craft Spirits Association.

If you were curious, Wigle is dedicated to the grain to glass philosophy, choosing to rely on local grain producers and doing things their way rather than sourcing juice from some of the larger distilleries in the country. Co-owner Meredith Meyer Grelli states that “We’ve spent the past 10 years building a regional supply chain around organic grains and agricultural products, because we’ve found we get more flavor and less junk.”

In addition to supporting local farms in the region, the distillery also aims to support businesses in their neighborhood. Given the arrival of the pandemic and the effect on store fronts in their area, Wigle did a special release named the Strip District Reserve. This reserve was released in tandem with other producers, including Maggie’s Farm Rum and Cinderlands Beer Co.  A portion of the proceeds thereof were then donated to small businesses in the area, and as we all know these days, every bit helps.

In any case, the whiskey. 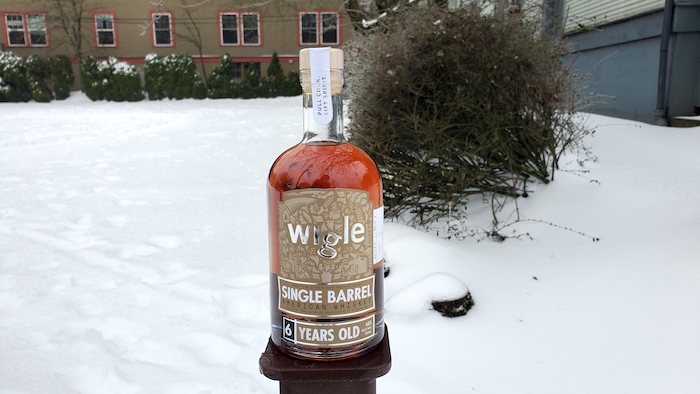 Appearance: Color is a dark orange and appears slightly viscous. In the glass, legs were slow to appear and were few and far between.

Nose: Sweet with a bunch of fruit. Definitely honey mixed with aromas of a flamed orange zest. From all signs thus far, you could tell that this was going to be a rich whiskey.

Palate: Way more floral than initially expected. But also strangely dry. The usual suspects were there with notes of honey and a touch of citrus. Though the finish was brief, I was also able to pick up an essence of Earl Grey tea hanging out.

This was a weird one. Simply floral and funky. Given the mash bill, I expected more sweetness from the wheat element. It's weird is all I can say.

However, the Wigle portfolio is vast and given the choice I would lean towards some of their more traditional selections.