I always appreciate a producer that stays to their roots. In this case, we have Wigle, hailing from the city of Pittsburgh, Pennsylvania in the Strip District, where there may have been a bottle of whiskey or two distilled. It’s said that throughout the 1700s-1800s western Pennsylvania was something of a hub of whiskey production. As the story goes, Phillip Wigle, around the 1790s, had defended his right as a distiller versus government tax collectors and may have started the Whiskey Rebellion.

The Wigle distillery, which sent us this bottle for review, began in  2011 and was founded by Mark Meyer, Mary Ellen Meyer, Meredith Meyer Grelli, Eric Meyer, Alexander Grelli, and Jeff Meyer. Over the years, the Wigle portfolio has expanded from whiskey, moving into the realms of gins, vodkas, and various other liqueurs.

So, here we have the Wigle Strip District Reserve. This is a pretty cool release. Organized with the Strip District Neighbors, this particular whiskey is sent out into the world along with special releases from Maggie’s Farm Rum and Cinderlands Beer Company. The proceeds for all of these products go right back to their neighborhood to support small businesses.

Here’s a bit of a breakdown about the whiskey itself. It’s a four grain, though information about percentages haven’t been released. In regards to production, it ended up being about 500 bottles or two barrels worth. The gang at the Wigle distillery are a grain to glass operation, opting to utilize local producers whenever possible.

The label for this one is also unique, designed by local artist Sarah Zeffiro. The label itself is quite representative of their neighborhood, with nods to other businesses in the area. Over the years, the distillery has incorporated the works of local artists for special editions. 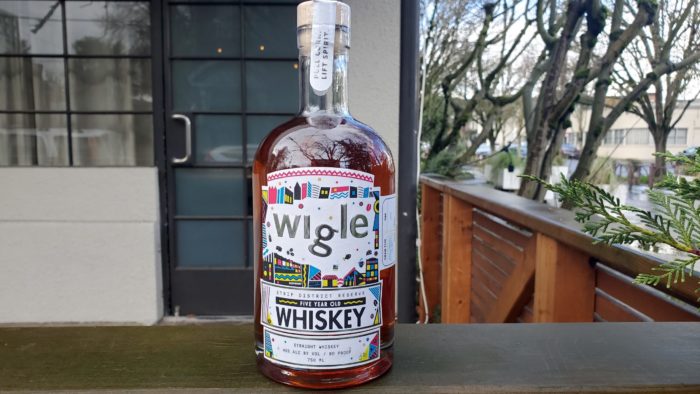 Appearance: A darker shade of copper with mild orange overtones. In the glass, there weren’t many legs to start, though eventually slow and slightly spaced.

Nose: Very sweet. This one was a hearty mix of candy corn and taffy. As a four grain, I am curious as to the percentages, though given the nose, one might guess heavier on the corn and barley side.

Palate: Definitely a lighter whiskey and a short but pronounced flavor profile. Cereal grains are abound, with a hint of banana. There was a bit more heat than initially expected, but that subsided pretty quickly.

I wasn’t sure what to expect from this one. It’s a four grain, a five year, and straight whiskey. However, what is it? I took a few tastes. At a guess, there’s a fair amount of barley and corn. The overall taste experience is sweet and funky with a touch of fruit.

At the end of the day, I’d put this one as a work in progress. I’d love to taste the next version and see how a different set of percentages might affect the flavor profile. Unfortunately, this whiskey doesn’t quite balance out, but the potential is there.

Part of of its annual...
READ ARTICLE 
Bourbon

Another Rodeo Now Has A Whisky Officially Associated With It

There is a theme in...
READ ARTICLE 
Canadian