Whiskey is a historic enterprise, full of stories. As a bartender for close to 20 years, I have been to numerous tastings and have read a lot of books about booze. One thing that does tend to stick with you are the stories. Sometimes it stems from family gems told over generations or that one time you were out with friends, possibly drinking whiskey, and somebody took their shirt off or something along those lines. It’s kind of amazing how much people will remember, when possibly drinking whiskey. With friends.

Wheel Horse Rye is distilled and aged at O.Z. Tyler distillery. The distillery was built in 1885 and was the first one in Owensboro, Kentucky. Another fact, it was the 10th, ever, to be licensed in the state. Over the many years of it’s existence, the spot has changed hands several times. It happens a lot in the industry. It also burned down in 1918 and was resurrected after prohibition.

One thing that I did notice however, was that a certain name keeps on popping up in regards to the spot. In 1939, members of the Medley family got together and bought up the distillery. Unfortunately, it was eventually bought and sold again, but members of the family stayed involved with production for decades. Whiskeys that you may know that have stemmed from the distillery include Ezra Brooks, Mellow Corn, Old Medley, and Wathen’s.

Moving forward to the present, or closer to it. The O.Z. Tyler distillery began going to work in 2016. New distillery doing their thing, making booze. Wheel Horse is a collaboration between O.Z. Tyler and Latitude Beverage, an independent bottler and a leading wine and spirits company that focuses on building brands that celebrate acclaimed producers. Wheel Horse Rye is the first whiskey released under the Wheel Horse brand and is the first aged rye whiskey to come out of O.Z. Tyler. 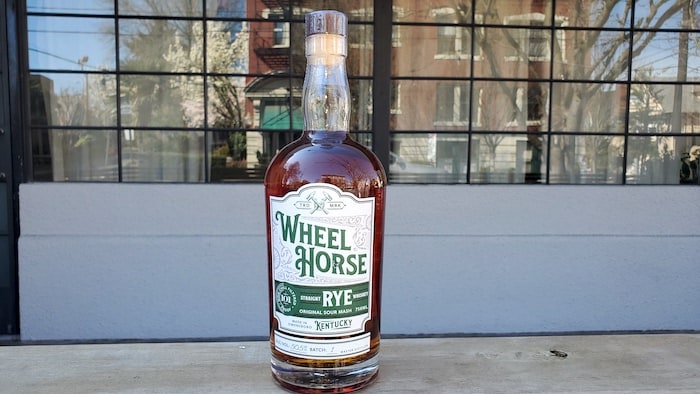 Nose: Big nose of booze and orange zest up front followed by aromas of cereal grain and oak char. At 101 proof, adding a few drops of water helped accentuate some of the more fruity elements.

Palate: This one was pretty straight forward and tastes like it smells. It’s hot and you get that rich flavor of rye combined with citrus. Comes with a long finish of smoked honey and oak.

I enjoyed this one quite a bit. It's simple and has a classic rye flavor profile. A little citrus, some spice, with a long finish. One thing that was surprising was how much color that the whiskey had with only two to three years in oak.

I have a feeling that there is a lot going on with this distillery and look forward to other releases from them. From what I've seen, they are focused on making good things available for a reasonable price and I don't mean that in a bad way. Sometimes it is simply better to keep things straight forward instead of trying to be the next big thing.