Editor’s Note: This whiskey was provided to us as a review sample by Westward Whiskey, using an older bottle style, pictured below, that’s now been revised by the brand. This in no way, per our editorial policies, influenced the final outcome of this review.

Westward Whiskey started out in 2004 in Portland, Oregon as House Spirits Distillery by founder Christian Krogstad. Krogstad was a brewer by education and trade. He was very skilled at brewing before entering into the spirit world to realize his dreams of an American single malt whiskey in the west.

Years later Westward has expanded and grown to a large production facility where they can make their own pale ale wash and offer nationwide distribution on their three flagship offerings. There’s still some experimentation happening in small batches such as this particular Pinot Noir Cask Finish with local Oregon winery Suzor and spirit club Flaviar.

What’s different about this particular Pinot Noir Cask Finish is the winery and the very limited quantity. If you like what you read in the tasting notes below you may want to get a bottle as soon as you can before they are gone. This would fall into the collectors category as it’s a one off special edition collaboration years in the making.

Westward Straight Malt Whiskey Pinot Noir Cask Finish, noted those behind it, “starts with Westward’s Single Malt made from 100% local two-row barley fermented using American Ale yeast. It’s double pot distilled and barreled in #3 char new American oak casks. Then it was aged for four years and three months before being moved to two French oak casks used to mellow Suzor’s famous Pinot Noir, where it sat for two more years. Finally, the nectar was bottled at a lovely 45% ABV.” 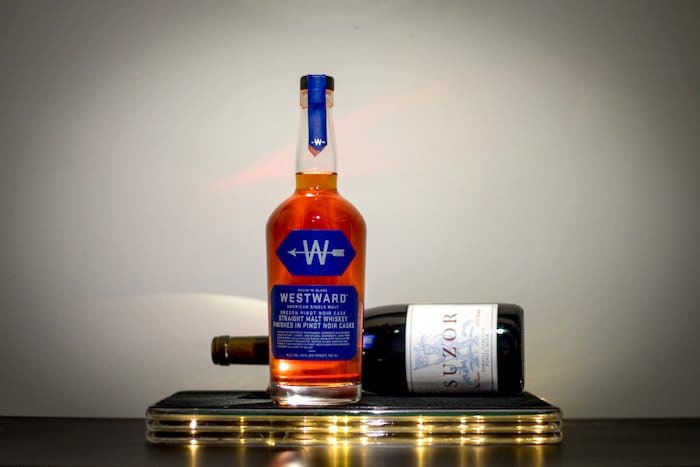 Vital Stats: Distilled and bottled by House Spirits Distillery in Portland Oregon. Finished in Suzor Wines barrels from Dayton Oregon. Made from 100% malted barley. Two row barley grown and malted in the Northwest. A very limited edition with less than 800 bottles. No age statement. 90 proof. $89.

Appearance: A beautiful burnt umber. On the darker red side for a whiskey.

Nose: The aroma is very rich with heavy fruits. There’s dates, cherry, playdoh and a hint of vanilla and brine. Smells a lot like a port.

Palate: Toasted nuts with filbert being the most notable. It’s musky with sandalwood and leather. The fruit is rich with blackberry, plum, citrus, and a dash of cinnamon and coffee.

Westward Whiskey has produced a very warm and rich whiskey. It's very fruit forward with hints of vanilla, filbert, sandalwood, apricot, and cherry. There's a heavy mouthfeel and a rich velvety finish. It's a dark whiskey that tastes like a wine. Flavors are rich like a dark beer, especially the finish. It has a nice Porter finish.

The Suzor Wines Pinot Noir it is paired with has a very thick, rich, bordeaux flavor. The prominent flavors being dark berries and currants. It has a very fresh finish. I can see how these wine casks give the whiskey that warm, rich flavor of berries. If you get a chance to buy a bottle of this wine and pair it with the whiskey you won't be disappointed.